Stanford distances itself from Dr. Scott Atlas after he urges resistance to public health measures 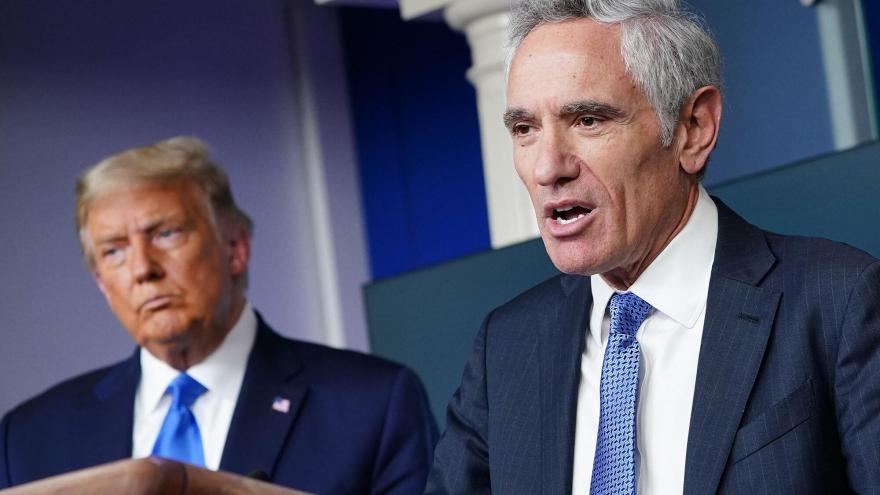 Stanford University distances itself from Dr. Scott Atlas after he urges resistance to public health measures in Michigan. In this image, Atlas speaks during a press conference at the White House on September 23, 2020, in Washington, DC.

"Stanford's position on managing the pandemic in our community is clear. We support using masks, social distancing, and conducting surveillance and diagnostic testing. We also believe in the importance of strictly following the guidance of local and state health authorities," the university said in a tweet.

"Dr. Atlas has expressed views that are inconsistent with the university's approach in response to the pandemic. Dr. Atlas's statements reflect his personal views, not those of the Hoover Institution or the university."

Atlas had criticized Michigan's new Covid-19 restrictions in a tweet shortly after they were announced Sunday evening, writing, "The only way this stops is if people rise up."

"You get what you accept. #FreedomMatters #StepUp," he said.

The message -- which runs counter to the consensus of public health officials -- immediately fueled new tension between the White House and Michigan Democratic Gov. Gretchen Whitmer, whom federal and state officials announced last month was the target of an alleged domestic terrorism kidnapping plot.

Responding to Atlas' tweet Sunday evening, Whitmer told CNN's Wolf Blitzer, "We know that the White House likes to single us out here in Michigan, me out in particular. I'm not going to be bullied into not following reputable scientists and medical professionals."

Speaking to Fox News on Monday, Atlas -- who removed a reference to the Hoover Institution in his Twitter handle -- said he wasn't trying to "threaten or incite violence" but rather is just "not very good at Twitter."

Atlas said the tweet was in response to "literally thousands of emails I get from people all over the country, begging me to figure out how to end the lockdowns," including from family members of people who have died by suicide amid restrictions.

"And so what I meant, and I'm sorry I'm not very articulate on Twitter, is that basically if you want to change things you have to have your voices heard," he explained. "I didn't mean anything more than that."

Unlike the government medical experts who advised President Donald Trump in the early months of the pandemic, Atlas has adopted a public stance on the virus much closer to the President's -- including decrying the idea that schools cannot reopen this fall as "hysteria" and pushing for the resumption of college sports.

"He's working with us and will be working with us on the coronavirus," Trump said in August. "And he has many great ideas. And he thinks what we've done is really good, and now we'll take it to a new level."