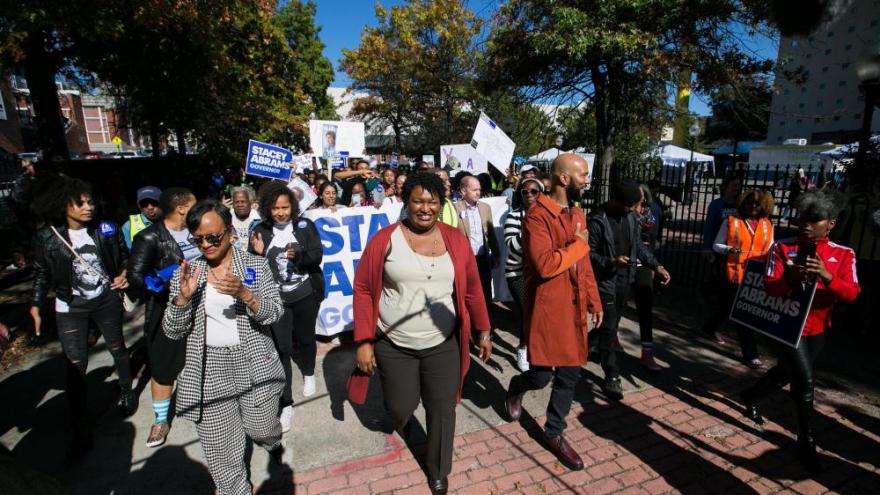 Georgia Democrat Stacey Abrams announced on December 1 that she is running for governor, setting up a possible rematch with Georgia GOP Gov. Brian Kemp in what could become one of the most closely watched races in the country.

(CNN) -- Georgia Democrat Stacey Abrams announced on Wednesday that she is running for governor, setting up a possible rematch with Georgia GOP Gov. Brian Kemp in what could become one of the most closely watched races in the country.

The voting rights advocate and former top Democrat in the Georgia House of Representatives tweeted her announcement, saying she is running "because opportunity in our state shouldn't be determined by zip code, background or access to power."

Abrams' announcement is a boon for Democrats. Abrams ran for governor in 2018, losing to Kemp by 1.4 points, but her campaign vaulted her into the upper echelons of the Democratic Party and made her a fundraising force who will be able to throw millions at a run. Democrats believe demographic and political changes in Georgia -- as evidenced by President Joe Biden's electoral victory there last year and the state being represented by two Democrats in the Senate -- make it more possible for a Democrat to become the top executive in the state.

"That's the job of governor -- to fight for one Georgia, our Georgia," Abrams said in her announcement video. "And now, it is time to get the job done."

Abrams is also expected to clear the Democratic field in the race, something that has not been the case for Kemp and Republicans. After drawing the ire of former President Donald Trump for not more forcefully going along with his baseless claims of voter fraud in Georgia and elsewhere in the 2020 election, Trump turned on Kemp and has pledged to make him politically pay for his disloyalty.

A possible vehicle for Trump's revenge tour: Former Sen. David Perdue, who lost reelection to Sen. Jon Ossoff in a runoff at the beginning of the year.

Republicans in the state have told CNN they expect Perdue to make a decision soon about running against Kemp in next year's primary, after Perdue allies floated the possibility in October.

A match-up between Kemp and Perdue could not only upend Georgia's governor race but split the GOP at a time when the party's dominance in the state has been threatened by recent electoral wins by Democrats. Some Republicans fear that a contested primary over the issue of the 2020 election could only further damage the GOP.

Trump's anger at Kemp is so deep that he has at times lauded Abrams as a way to attack the Republican governor. While speaking in Georgia earlier this year, Trump said of Kemp, "Stacey, would you like to take his place? It's OK with me."

He added: "Of course having her, I think, might be better than having your existing governor, if you want to know what I think. Might very well be better."

GOP division would give a boost to Abrams in an election year that is otherwise looking difficult for Democrats.

"The odds are only in her favor if the Republicans have a bloody primary," said Erick Erickson, the Atlanta-based conservative talk-radio host.

The Republican Governors Association has said it will support GOP incumbents, including Kemp, who face primary challenges. Dave Rexrode, the RGA's executive director, reiterated that position in a tweet that also went after Abrams.

"We defeated her once (even though she failed to admit it) and we'll do it again," Rexrode tweeted Wednesday. "[The RGA] are all-in to re-elect [Kemp] and keep GA heading in the right direction."

Abrams first ran for office in 2007, when she won her Georgia House seat. Over the next 10 years, she built a strong reputation within the Democratic Party in Georgia, a standing that helped her launch her 2018 gubernatorial campaign -- a bid that would've made her the nation's first Black woman state leader.

She lost that election, but the exposure during the race turned Abrams into a well-known and sought-after Democrat. After the election, Abrams founded Fair Fight, an organization that advocates for voter protection across the country, and found herself high on Biden's list of possible vice presidential nominees in 2020.

Abrams' rise in the Democratic Party made her more of a target to Republicans, who have repeatedly criticized the way she refused to concede the 2018 race to Kemp because of voter suppression concerns.

"So, let's be clear -- this is not a speech of concession, because concession means to acknowledge an action is right, true or proper," she said when she ended her campaign. "As a woman of conscience and faith, I cannot concede that. But, my assessment is the law currently allows no further viable remedy."

Kemp responded to Abrams' Wednesday announcement by saying "next November's election for Governor is a battle for the soul of our state."

"I'm in the fight against Stacey Abrams, the failed Biden agenda, and their woke allies to keep Georgia the best place to live, work, and raise a family," the governor added.