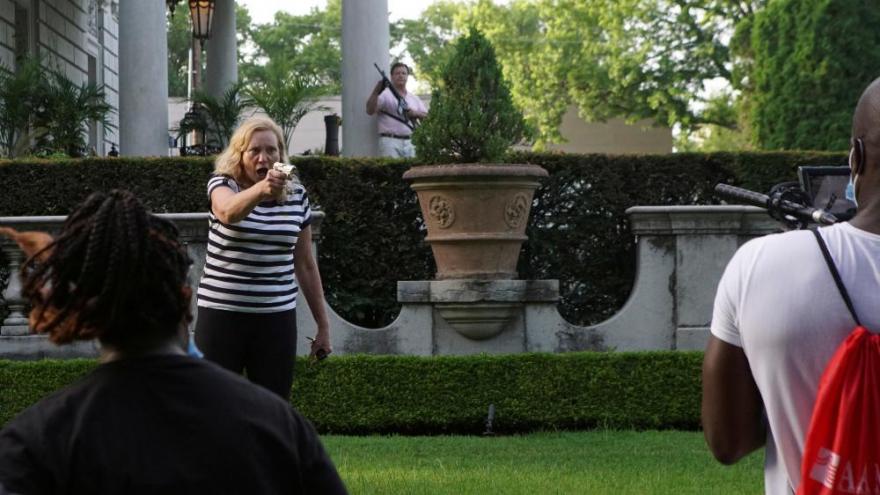 A couple draws their firearms on protestors as they enter their neighborhood during a protest against St. Louis Mayor Lyda Krewson on June 28, 2020.

(CNN) -- The office of St. Louis Circuit Attorney Kim Gardner said on Twitter that Missouri's governor and President Donald Trump "came after her" for investigating a case.

At a news conference Tuesday, Gov. Mike Parson said Trump had expressed interest in the Mark and Patricia McCloskey case. The McCloskeys were seen on a viral video brandishing guns at protesters outside their mansion last month.

Parson said he spoke to Trump on the phone about the case. At the same news conference, the governor expressed his belief the couple should not face charges.

Joel Schwartz, the couple's attorney told CNN he expected charges to be forthcoming earlier on Tuesday.

By Tuesday night, Gardner's office posted a statement on Twitter on her behalf.

Gardner does not specifically mention what case she's referring to in her statement or expand on how the governor or President allegedly went after her.

"Today, both the Governor and Donald Trump came after me for doing my job and investigating a case. While they continue to play politics with the handling of this matter, spreading misinformation and distorting the truth, I refuse to do so. As I always do, I am reviewing all available facts and the law and will apply them equally, regardless of the people involved."

Gardner previously told CNN in a statement that she was alarmed by the events involving the McCloskeys and her office is investigating.

"Make no mistake: we will not tolerate the use of force against those exercising their First Amendment rights, and will use the full power of Missouri law to hold people accountable," she said earlier this month.

CNN has reached out to Gardner's office, the Missouri governor's office, and the White House for further comment.

Videos previously obtained by CNN show McCloskey, with a long rifle, and his wife, with a handgun, outside their home on June 28. They were seen brandishing the weapons as demonstrators walked outside the home, protesting Mayor Lyda Krewson's decision to publish the names and addresses of people in favor of police reform. The private street where the McCloskeys live is near Krewson's home.

Last month, Mark McCloskey told CNN's Chris Cuomo that he was "in imminent fear" of the protesters.

"I was a person scared for my life, protecting my wife, my home, my hearth, my livelihood. I was a victim of a mob that came through the gate," McCloskey said at the time.

He said it is "ridiculous" to consider him the face of opposition to the Black Lives Matter movement after the incident.