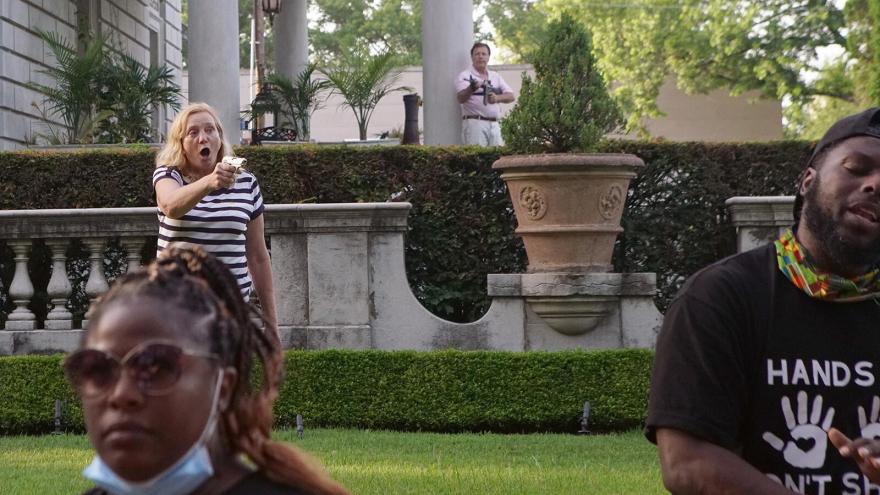 Patricia and Mark McCloskey drew their firearms on protestors as they entered their neighborhood during a protest against St. Louis Mayor Lyda Krewson, in St. Louis, Missouri, in June 2020.

(CNN) -- The St. Louis couple who made headlines last year for pointing their guns at people protesting near their home pleaded guilty to misdemeanor charges, according to court documents obtained from the city of St. Louis on Thursday.

Mark and Patricia McCloskey drew national attention in June 2020 after they were seen on video brandishing guns outside their mansion and pointing them at protesters, who were walking on a private street toward the home of the St. Louis mayor.

In videos posted to social media, Mark McCloskey is seen holding a long rifle and Patricia McCloskey a handgun as demonstrators -- who were protesting then-Mayor Lyda Krewson's decision to publish the names and addresses of people in favor of police reform -- walked past their home.

As part of the plea agreement, Mark and Patricia McCloskey agreed to surrender their handgun and semi-automatic rifle, according to the documents. Mark McCloskey told CNN last July that he was "in imminent fear they (protesters) would run me over, kill me."

The documents also state Mark McCloskey "purposely placed at least one person in apprehension of immediate physical injury" by waving a semi-automatic rifle in the direction of the crowd in front of his home.

Mark McCloskey, who announced a run for US Senate last month, released a statement Thursday saying he wouldn't change his actions if faced with a similar situation again.

"The prosecutor dropped all charges against me, except for a claim that I put other people in imminent fear of physical harm. That's exactly what I did, that's what the guns were for. And any time the mob comes and threatens me, I'll do the same thing again to protect my family," he said.

Mark McCloskey is running for the Senate seat currently held by Republican Roy Blunt, who announced in March he will not seek reelection next year. Last August, the couple spoke at the Republican National Convention, where they falsely claimed Democrats want to "abolish" the suburbs.

McCloskey faces a crowded field in his run for the US Senate seat, which CNN has categorized as among the Senate seats most likely to flip in 2022.

"I will never back down to the liberal mob in the Senate, and I will always stand strong for Missouri," McCloskey added in his statement.