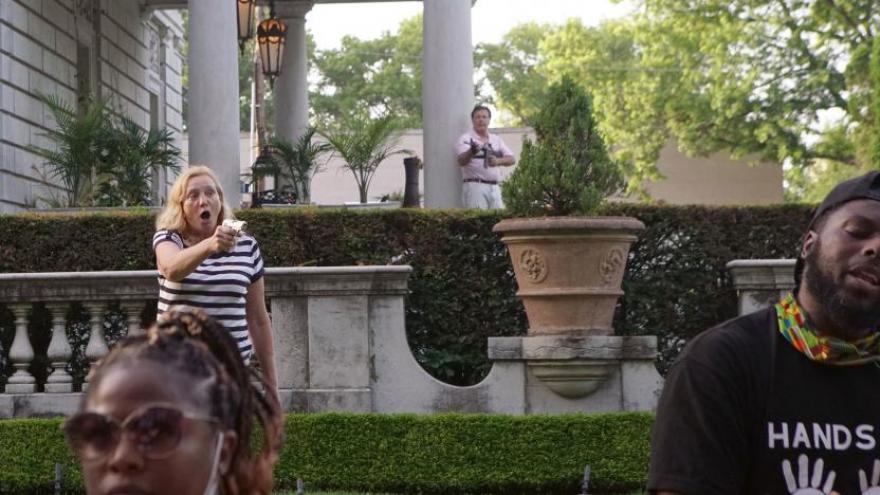 Protesters making their way to demonstrate outside of the St. Louis mayor's residence were walking on a private street when two armed individuals came out of a home with weapons.

(CNN) -- Protesters en route to demonstrate outside the St. Louis mayor's residence were walking on a private street when two armed individuals came out of a home brandishing weapons.

Videos obtained by CNN show two people, a man with a long rifle and a woman with a handgun, holding their firearms outside a St. Louis home as protesters walked by -- protesting Mayor Lyda Krewson's decision to publish the names and addresses of people in favor of police reform.

Two eyewitness videos obtained by CNN were taken outside the home on Portland Place, a private street near Krewson's home, around 7:30 p.m. Sunday.

Daniel Shular, a local reporter, took one of the videos and said he watched the entire roughly 10-minute long incident unfold. About 500 protesters were cutting through Portland Place, according to Shular, to bypass road closures nearby that blocked access to the mayor's home.

"A door next to the gate at Portland Place was unlocked and protesters went through it to cut through the neighborhood to get to Krewson's house," he told CNN.

That's when Shular says the man and the woman -- now identified as Mark and Patricia McCloskey -- came out of the house with the firearms. At one point in his 31-second video, the woman points the handgun in the direction of protesters.

Couple that brandished firearms speaks out

"A mob of at least 100 smashed through the historic wrought iron gates of Portland Place, destroying them, rushed towards my home where my family was having dinner outside and put us in fear of our lives," Mark McCloskey, 63, told CNN affiliate KMOV.

Property records obtained by CNN confirm the two own the property. The St Louis Streets Department confirmed to CNN that Portland Place is a private street.

"The peaceful protesters were not the subject of scorn or disdain by the McCloskeys," their attorney, Albert S. Watkins, said in a statement to CNN. "To the contrary, they were expecting and supportive of the message of the protesters. The actions of violence, destruction of property and acts of threatening aggression by a few individuals commingling with the peaceful protesters, gave rise to trepidation and fear of imminent and grave."

Watkins says his clients acted, "lawfully on their property," and that "their actions were borne solely of fear and apprehension, the genesis of which was not race related. In fact, the agitators responsible for the trepidation were white."

Firearms were brandished, pointed at protesters

"This is all private property," McCloskey went on to say in his statement to KMOV. "There are no public sidewalks or public streets. We were told that we would be killed, our home burned and our dog killed. We were all alone facing an angry mob."

A second video, taken later on in the incident by protester Avery Risch, shows just how tense the situation got. At one point, Patricia McCloskey, 61, was standing on the grass, closer to the protesters, pointing the handgun at them.

In both Shula and Risch's videos, it appears the McCloskey's and protesters exchange words, but it's unclear what is said.

The St. Louis Metropolitan Police Department told CNN it is investigating the incident. Circuit Attorney for the city Kimberly M. Gardner told CNN in a statement that she was alarmed by the events and her office is investigating.

"We must protect the right to peacefully protest, and any attempt to chill it through intimidation or threat of deadly force will not be tolerated," she said in her statement. "Make no mistake: we will not tolerate the use of force against those exercising their First Amendment rights, and will use the full power of Missouri law to hold people accountable."

According to a police report, officers responded to a "call for help" made by the couple, who said there was a loud commotion.

The police report said the couple "observed a large group of subjects forcefully break an iron gate marked with 'No Trespassing' and 'Private Street' signs."

However, Shular and Risch said they did not witness a gate being broken.

"It looked like the gate was unlocked," Shular told CNN. "I didn't see anyone try to break it."

In a video livestreamed on Facebook, the left gate door is held open by the first protesters that enter the private street. That video does not show how the door was first opened.

However, a second Facebook Live video taken later shows the right gate door bent and broken on the ground.

Twenty seconds after several protesters made their way through the gate, the video shows Mark McCloskey exiting his house with a long rifle, yelling at protesters to leave the private street.

Once through the gate, (the McCloskeys) advised the group that they were "on a private street and trespassing and told them to leave," according to police. The couple told police the group began yelling obscenities and threatened to harm them.

In both videos livestreamed on Facebook, there is a heated, often profane, back and forth between the protesters and the McCloskeys.

"When the victims observed multiple subjects who were armed, they then armed themselves and contacted police," states the report.

Shular recounted to CNN that he did see some armed people at the protest but that "no one drew their guns on the people from the house."

Why protesters were demonstrating

The protesters passing through Portland Place were headed to Mayor Krewson's house, spurred by her reading the names and addresses of people asking for police reform. The names and home addresses she read were submitted as part of public comments to the St. Louis County Council.

Friday, the mayor apologized on Twitter, saying she didn't mean to hurt anyone.

"I'd like to apologize for identifying individuals who presented letters to me at City Hall today. This was during one of my Facebook updates as I was answering routine questions," Krewson said in a tweet. "Never did I intend to harm anyone or cause distress. The update is removed and again, I apologize."

CNN has reached out to the St. Louis mayor and protest organizers about the incident but has not yet received a response.