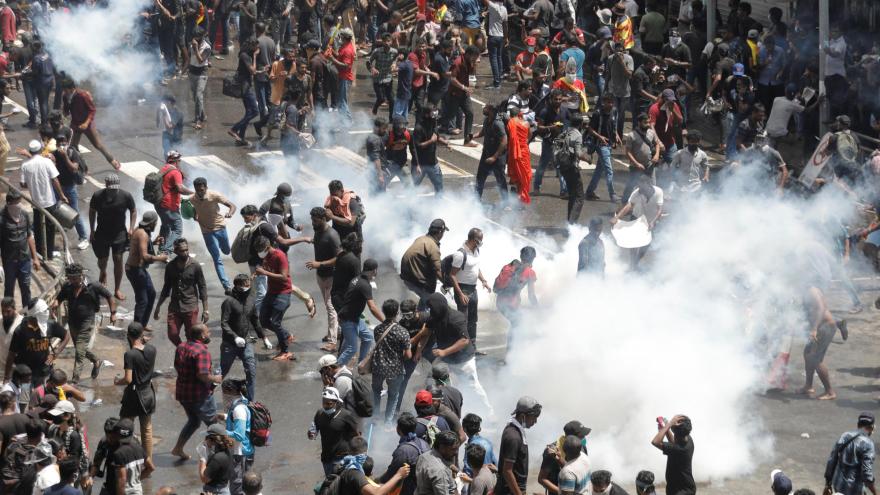 (CNN) -- Sri Lanka's Prime Minister Ranil Wickremesinghe on Saturday said he was willing to resign and make way for an all-party government to take over, shortly after protesters reportedly breached his official residence in Colombo during demonstrations over the country's worsening economic crisis.

"To ensure the continuation of the Government including the safety of all citizens I accept the best recommendation of the Party Leaders today, to make way for an All-Party Government," Wickremesinghe wrote on Twitter.

"To facilitate this I will resign as Prime Minister."

His statement came after a meeting of party leaders, held by Sri Lanka's parliament speaker, agreed to ask both the president and prime minister to resign per an "overwhelming request," Sri Lankan lawmaker Rauff Hakeem tweeted on Saturday.

Wickremesinghe has not yet submitted his letter of resignation to President Gotabaya Rajapaksa.

The announcement comes after the Speaker asked the President to resign following a meeting of party leaders.

Anger reached unprecedented levels in the South Asian nation of 22 million on Saturday, as more than 100,000 people massed outside Rajapaksa's residence, calling for his resignation.

Video broadcast on Sri Lankan television and on social media showed the protesters enter the President's House -- Rajapaksa's office and residence in the commercial capital -- after breaking through security cordons placed by police. Images show demonstrators inside the building and hanging banners from the balcony, as well as swimming in the residence's pool.

Rajapaksa is not at the site and has been moved elsewhere, security officials told CNN. It is unclear how many security personnel are present at the location.

Protesters then also breached Wickremesinghe's official residence in Colombo, known as Temple Trees, according to local media reports, while video of protesters entering the gates to Wickremesinghe's residence circulated on social media on Saturday.

Demonstrators also broke into Wickremesinghe's private residence, on Fifth Lane, and set it on fire, according to his office. Live video streamed by local media and seen by CNN showed the residence engulfed in flames as crowds gathered at the scene.

Wickremesinghe was not there at the time it was breached: He had been moved earlier to a secure location, his office said.

If both Wickremesinghe and Rajapaksa resign, under the Sri Lankan constitution, the speaker of parliament will serve as acting president for a maximum of 30 days. Meanwhile, parliament will elect a new president within 30 days from one of its members who will hold the office for the remaining two years of the current term.

At least 55 people have been injured in the protests, according to Dr. Pushpa Zoysa with the National Hospital of Sri Lanka, who said the figure included three people with gunshot wounds. Among those injured is a lawmaker from eastern Sri Lanka, she added.

Earlier Saturday, Wickremesinghe called an emergency meeting of party leaders to discuss the current situation and come to a resolution, his office said. He also asked the Speaker of Parliament to summon MPs.

A police curfew that was earlier imposed in several police divisions in the Western Province of Sri Lanka was lifted on Saturday. Several politicians and the Bar Association in Sri Lanka referred to the curfew as being "illegal," saying there had been no instances of violence to justify imposing the measure.

In a statement Saturday, the Bar Association called on Rajapaksa to "consider whether he can continue" in light of the protesters storming the President's House. It also urged the government and MPs "to immediately ensure that political stability of the nation is secured forthwith. There should be no delay in ensuring such transition."

Tens of thousands have taken to the streets in recent months, calling for the country's leaders to resign over accusations of economic mismanagement.

In several major cities, including Colombo, hundreds are forced to queue for hours to buy fuel, sometimes clashing with police and the military as they wait.

On Saturday, crowds of anti-government demonstrators protested outside a stadium in Sri Lanka's southern coastal city of Galle during the country's Test cricket match against Australia, the world's No. 1 ranked team, though the protests didn't stop play.

Local media showed videos of large crowds protesting against the government outside the Galle International Stadium, which is about a two-hour drive from Colombo. They waved Sri Lankan flags and carried banners with signs reading "Power to the people" and "GotaGoHome" — demanding Rajapaksa step down.

Many protesters then defied a police ban to march to the top of a fort overlooking the stadium grounds, where they continued to hold banners and chant their demands.

Meanwhile, images from Colombo painted a chaotic scene, with pictures showing demonstrators running from tear gas, and clashing with police in body armor.

Schools have been suspended and fuel has been limited to essential services. Patients are unable to travel to hospitals due to the fuel shortage and food prices are soaring.

Trains have reduced in frequency, forcing travelers to squeeze into compartments and even sit precariously on top of them as they commute to work.

Wickremesinghe said the country had entered talks with the International Monetary Fund (IMF) to revive the country's economy.

On Tuesday, he told parliament that talks with the IMF were "difficult" as they entered the discussion as a "bankrupt" country, rather than a developing one.