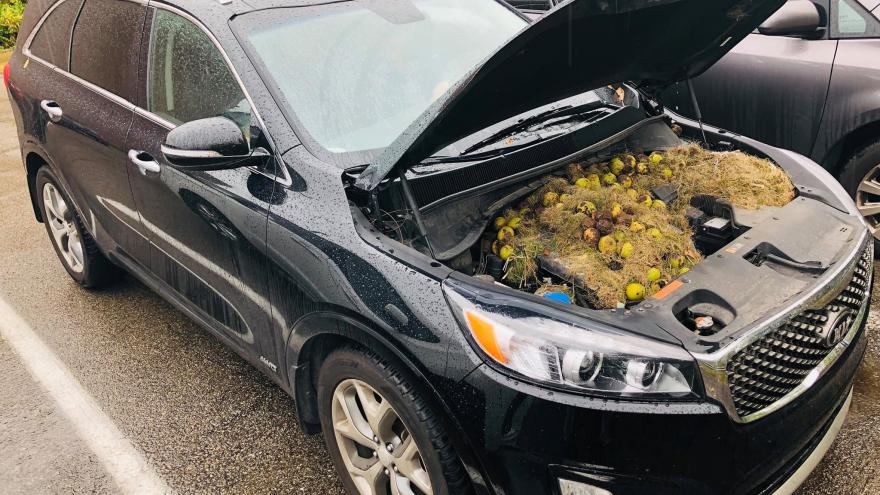 PITTSBURGH (CBS 58) -- If you park your car outside, you might want to look under the hood every once in a while. You could end up with a little surprise from the critters in your yard.

The squirrels around Holly and Chris Persic's home seem to be stocking up for the winter by taking walnuts from their yard in Pittsburgh and shoving them under the hood of their car.

Holly was driving her car Monday when she thought it smelled like it was burning and was making a strange sound. When she popped the hood, she found more than 200 walnuts and lots of grass.

"They were everywhere, under the battery, near the radiator fan," Chris said. "The walnuts on the engine block were black and smelt like they were definitely roasting."

Holly had her car inspected last month but hadn't looked under the hood since then, her husband Chris told CNN on Tuesday. The walnuts started falling only a few weeks ago.

They had noticed there weren't very many walnuts around the yard, given how big the tree is, but they said they didn't think they would find them under the hood of their car. 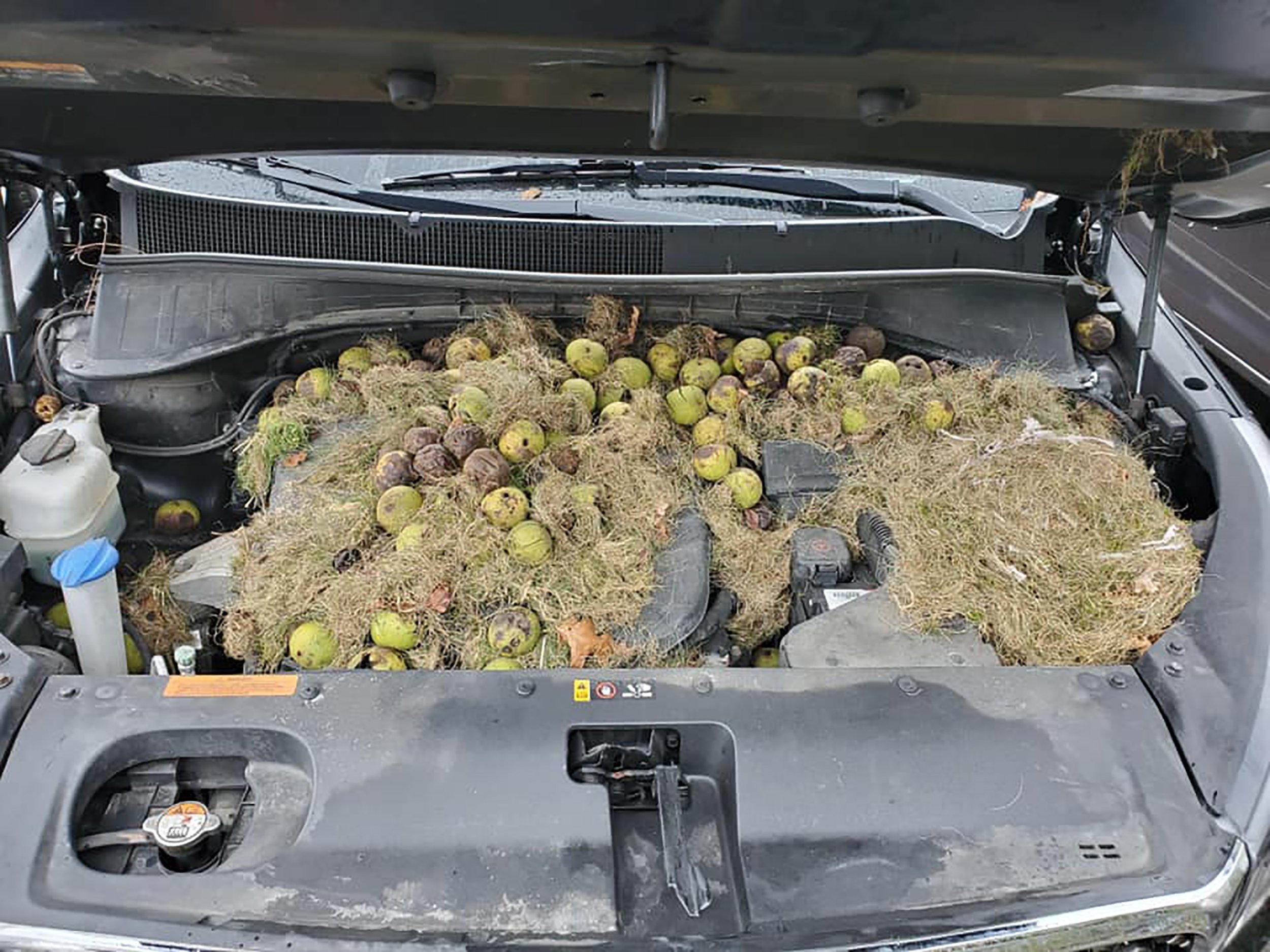 There were so many walnuts and so much grass under the hood of the car that it took almost a full hour to get the car clean enough to take it to a local auto repair shop.

Once they got the car to the shop, mechanics were able to put it up on a lift and remove the protective plate from under the car. Walnuts they couldn't reach fell out and covered the floor. There were enough walnuts to fill half a trash can.

"My truck may have had a squirrel chew through/pull out a fuel injector hose, and Holly's looked like they were storing up for the next three winters," Chris wrote in a post on Facebook. "Was absolutely nuts ... no pun intended."

There was no damage to the car, beyond it needing a cleanup.

If it weren't for the rain, Chris said he thinks this would have been less of a funny story. The grass under the hood was damp, but he thinks it could have caught fire if it wasn't.

"It was more or less just smoldering," he said. "Something crazy that happened, that could've turned out bad, ended up being a little funny." 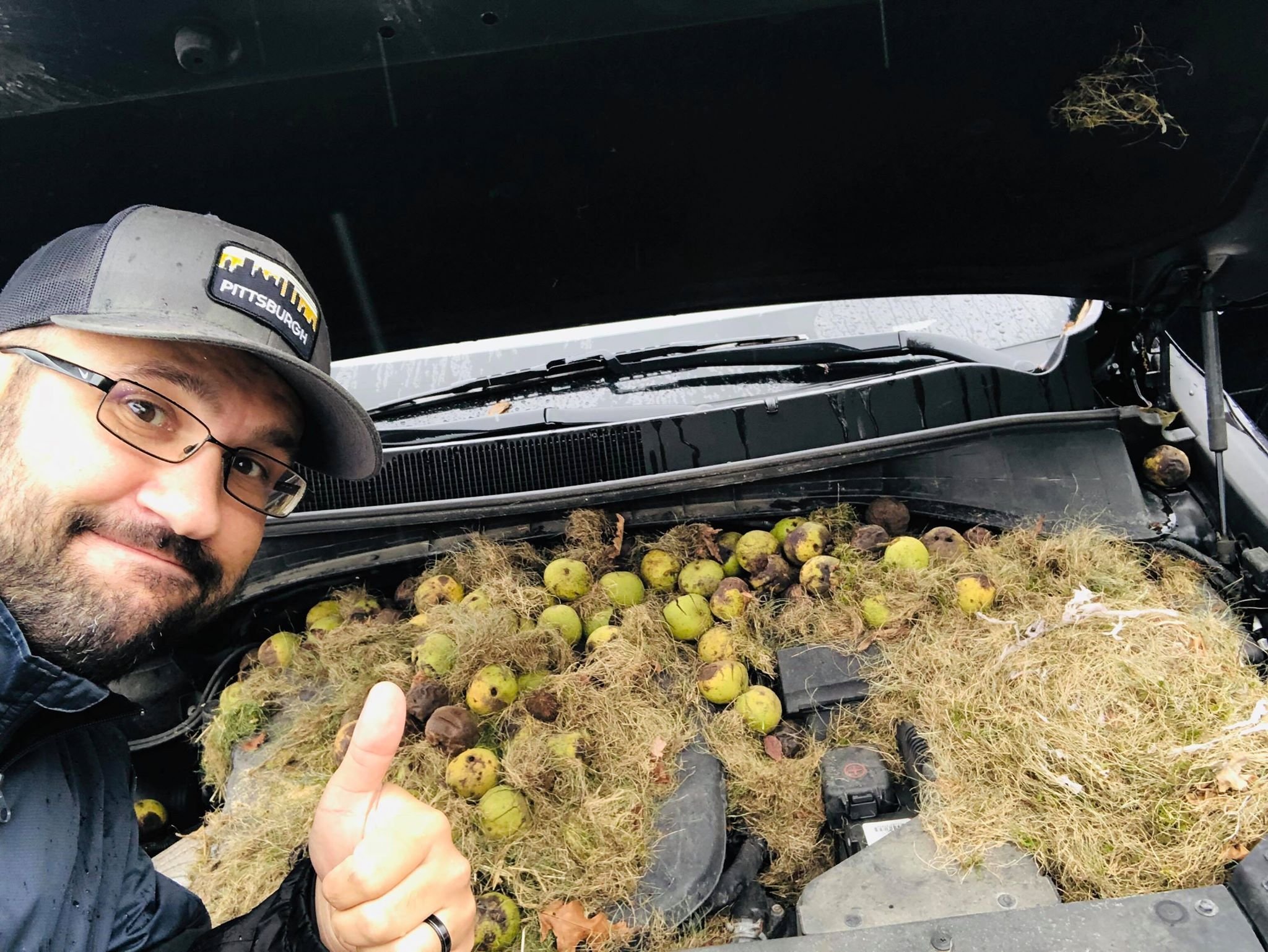 Chris said people have messaged him that they checked under their hoods because of what happened to him, and he said he hopes people continue to check on their cars.

"Long story short, if you park outside, do yourself a favor and check under the hood every once in awhile," Chris wrote on Facebook.