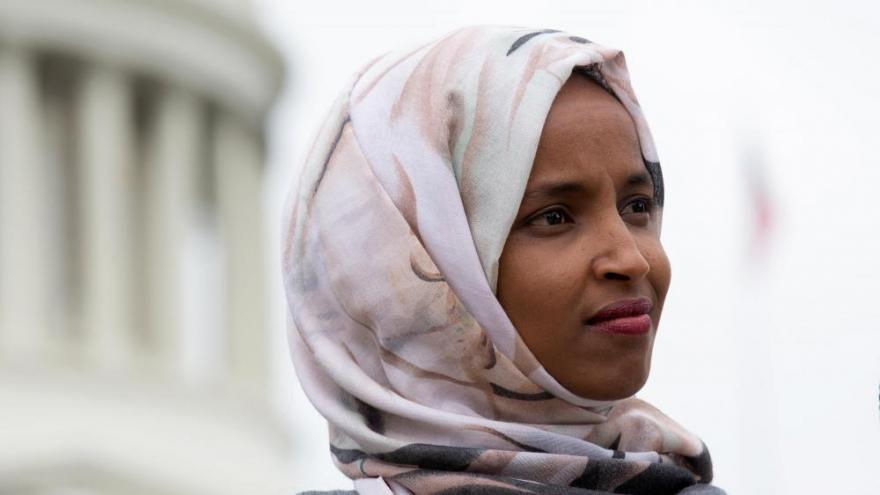 US Rep. Ilhan Omar of Minnesota, here speaking at a press conference in June 2019 in Washington, DC, wins reelection in the Minnesota House race.

(CNN) -- Democratic Rep. Ilhan Omar, a member of the progressive Squad in Congress, will hold onto her US House seat in Minnesota after she won reelection and defeated a well-funded Republican challenger, CNN projects.

Omar, who has become a high-profile lawmaker during her first-term in Congress, was widely expected to win in the state's heavily Democratic 5th congressional district, but Lacy Johnson, her GOP opponent, nevertheless raised a significant amount of money despite facing an uphill battle.

President Donald Trump endorsed Johnson in May, putting a national spotlight on the GOP challenger that helped fuel fundraising for his campaign. A spokesman for the campaign told CNN earlier this year that the President's endorsement generated a big bump in fundraising.

In an interview with CNN in February, Johnson acknowledged that he faced a tough race in the heavily Democratic district.

"I do have a realistic chance, but let's be honest it's the same type of realistic chance I would have of climbing Mount Everest or stringing a tightrope between the two World Trade Center towers and walking between those. I don't kid myself about the difficulty of the task that lies before me," Johnson said, adding, "The fact that it's difficult and hard, I welcome that."

The general election win for Omar comes after she defeated another well-financed challenger in a Minnesota Democratic primary earlier in the year.

During her first term in office, Omar, who made history along with Democratic Rep. Rashida Tlaib of Michigan as the first Muslim women to serve in Congress, attracted a devoted following on the political left for her outspoken support of progressive priorities.

But she also became a high-profile target of criticism, facing attacks from congressional Republicans and President Donald Trump. Congressional Democrats have rallied around Omar in the wake of the attacks from the President.

The congresswoman also faced rebuke from members of her own party not long into her tenure in Congress. Early in her term, House Speaker Nancy Pelosi of California and other members of House Democratic leadership once went so far as to publicly call on Omar to apologize for comments they said included "anti-Semitic tropes."

Omar apologized after a backlash from House Democratic leaders and has since sought to limit the damage and win over skeptics.

As she ran to keep her seat, Omar was able to tout endorsements from top Democratic party leaders from various wings of the party, including Pelosi as well as independent Sen. Bernie Sanders of Vermont and her fellow members of the Squad: Tlaib along with Reps. Alexandria Ocasio-Cortez of New York and Ayanna Pressley of Massachusetts.