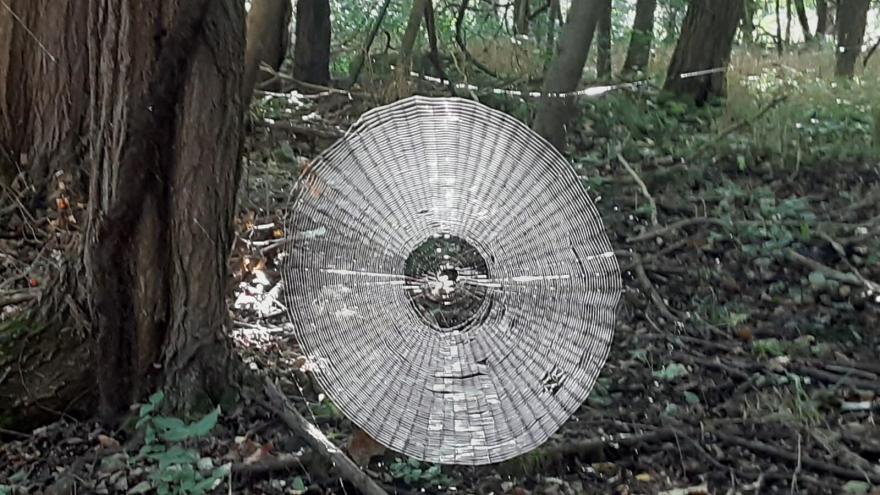 A Missouri Department of Conservation employee photographed a large orb weaver spiderweb while out on a trail near Springfield.

(CNN) -- A Missouri Department of Conservation employee snapped a photograph of a huge spiderweb, and the department's social media followers couldn't help but comment on its spooky appearance.

Media specialist Francis Skalicky shot the photo on a trail near Springfield recently, according to the department, which posted the image on its Facebook page on Wednesday.

The intricate, circular web was constructed between two trees, and the photo's perspective makes it look massive.

The web was made by an orb weaver spider, an arachnid known for its intricate web designs. They are large in size -- approximately a half-inch for females -- and are usually hairy or furry, according to the department's website. The spiders help to control the population of flies and other annoying bugs, but that's not the first thing that comes to mind.

Facebook users commented on how appropriate it was to see an orb web of this size in October, and one even mentioned it was "the kind that literally 'catch' people if they walk through them at night."

Others made their feelings on the spider known, while appreciating its beautiful work. Several comments mentioned finding a new place to live, while many joked that the photo should have had a disclaimer for those terrified of spiders.

But others found beauty in the spiderweb, with one user saying it reminded her a lace doily. Another user said it was reincarnation at work: "Christo has returned as an orbweaver spider!" referring to the conceptual artist who passed away earlier this year.

While these spiders are quite common, it definitely gets Halloween fans in the mood for the season.