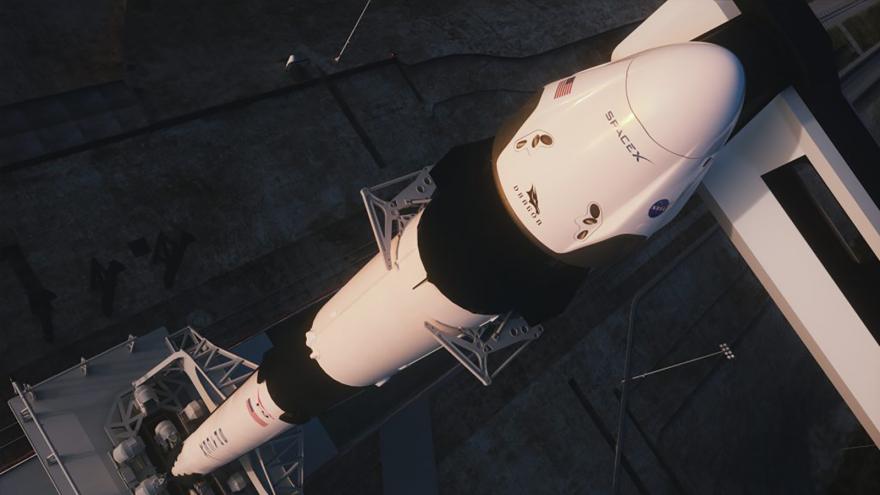 (CNN) -- After months of anticipation, SpaceX's new crew-worthy spacecraft, Crew Dragon, reached its last major milestone in a years-long testing program. The success paves the way for astronauts to begin using the spacecraft for rides to the International Space Station this year.

The capsule was launched — without people on board — atop a SpaceX Falcon 9 rocket from Kennedy Space Center in Florida at 10:30 am ET on Sunday. About 84 seconds after liftoff, Crew Dragon intentionally ejected itself from the rocket to simulate how it would carry passengers to safety if something goes awry during launch.

SpaceX CEO and chief engineer Elon Musk on Twitter called the in-flight abort test a "risky mission" that's "pushing the envelope in so many ways."

It ended up being "a picture perfect mission," Musk said during a post-launch press conference. "It went as well as one could possibly expect."

The first astronaut mission could happen as soon April, he said, adding that the capsule that will be used for that historic mission will be ready in February or March.

During the in-flight abort test Sunday, SpaceX's Falcon 9 rocket shut off its engines after climbing more than 10 miles above ground at supersonic speeds. At the same time, the Crew Dragon capsule detached itself and fired up its own set of engines for a about ten seconds to thrust the vehicle up and away from the rocket.

Crew Dragon then used onboard thrusters to orient the vehicle as it fell back toward Earth. Two sets of parachutes slowed its descent before it splashed down in the Atlantic Ocean.

SpaceX's Falcon 9 rockets are designed to be reusable, and the one used Sunday already made three trips to space. But for the purposes of the test, the rocket was intentionally destroyed after Crew Dragon executed its emergency abort, erupting into a ball of fire mid-air. Crews will work to recover as much of the debris from the vehicle as possible.

A successful emergency abort test will mark a significant win for SpaceX. There is still some testing left to do, such as additional checks on the vehicle's parachute design, Kathy Lueders, NASA's Commercial Crew Program manager, said during a press briefing Friday. But officials can now work to finish the long-awaited verification process that will deem Crew Dragon ready for its first mission with astronauts on board.

The next step will be for SpaceX and NASA to closely review the data collected by the in-flight abort test, including information collected by two sensor-clad test dummies that rode aboard Crew Dragon Sunday. They'll help determine what type of G-forces astronauts would experience during such a launch abort

NASA asked the private sector to develop crew-worthy spacecraft to replace the Space Shuttle program after it was retired in 2011. SpaceX was allotted $2.6 billion and Boeing was awarded $4.2 billion in 2014, and the space agency initially predicted their vehicles would be ready to fly astronauts by 2017. But development of both spacecrafts took years longer than expected. Meanwhile, NASA has paid Russia billions of dollars for American astronauts to ride aboard Russia's Soyuz capsules.

Though the US space agency paid the companies to develop their vehicles, Boeing's Starliner and SpaceX's Crew Dragon are privately owned and operated. So, unlike previous human spaceflight programs, NASA will essentially be a customer for the companies during their missions.

Boeing suffered a setback when its Starliner spacecraft malfunctioned during an orbital test flight in December, and it's not clear when the vehicle will be ready for crewed missions.

The capsule has already demonstrated it can fly into orbit and autonomously dock with the International Space Station: It completed an uncrewed demonstration mission in March 2019.

And it previously conducted a ground test of its emergency abort system, which saw Crew Dragon blast itself off a launch pad to simulate how it could fly crew away from a malfunctioning rocket if something goes wrong in the minutes before takeoff.

The company suffered a significant setbacklast year, however, when a Crew Dragon capsule exploded during a ground test of the vehicle's emergency abort engines. SpaceX worked for the past nine months to address that issue and to finetune Crew Dragon's parachute design.

Boeing will not conduct a test analogous to SpaceX's in-flight abort test. Lueders said Friday that each company is allowed to design their own testing programs, and "each of them have their pros."

"As long as it's meeting our overall strategy, we allow the flexibility for each of the providers to propose what [testing] makes sense for their systems," she said.

Benji Reed, SpaceX's director of crew mission management, said during a press conference earlier in the week that demonstrating Crew Dragon's ability to escape a rocket during a mid-air emergency was important to SpaceX — particularly after an emergency abort of a Russian Soyuz spacecraft saved the lives of two astronauts when a rocket malfunctioned in 2018.

Two NASA astronauts are selected to be Crew Dragon's first passengers: Bob Behnken and Doug Hurley, both of whom are former military test pilots and veterans of space shuttle missions.