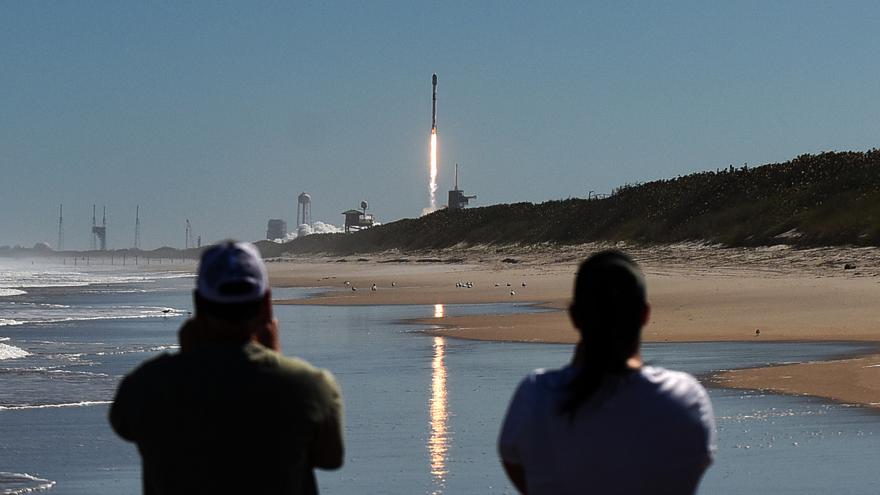 (CNN) -- Up to 40 of SpaceX's Starlink satellites are expected to fall out of orbit thanks to some inopportune timing: The company launched the satellites directly into a solar storm.

A batch of 49 Starlink internet satellites were on SpaceX's latest launch on February 3, and now the company is expecting to lose most of them because they hit a space weather event known as a geomagnetic storm. This event occurs when streams of charged particles, or solar winds, emitted from the sun interact with Earth's magnetic field. The energized particles can heat up the upper atmosphere, causing it to thicken. (Yes, there is still atmosphere in areas of outer space closest to home. The Earth's atmosphere fades out over thousands of miles.)

In this case, the storm impacted the area of orbit where SpaceX's newest Starlink satellites were deployed, and it made the atmosphere dense enough that the satellites weren't able to maneuver their way up to their intended orbit.

It's not clear how large the financial impact will be. SpaceX has not shared how much it costs to build a Starlink satellite, though the company's president, Gwynne Shotwell, said in 2019 that the price was well below $1 million a piece.

The satellites that SpaceX launched last week were expected to join roughly 2,000 Starlink satellites that it has already launched as the company works to drastically ramp up its global space-based internet business — a first-of-its-kind venture that hopes to allow people in even the most remote areas of the world to gain high-speed internet access. SpaceX has said it will eventually need as many as 42,000 satellites, all working in coordination to blanket the globe in connectivity, in order to deliver high-speed, uninterrupted service. As of January, the service had about 145,000 users across 25 countries.

It's not totally clear how SpaceX evaluated the weather in space ahead of last week's launch. The company did not respond to a request for comment, and rarely responds to reporters' inquiries.

But rocket launches have been delayed for space weather events before, said Bill Murtagh, the program coordinator at the National Oceanic and Atmospheric Administration's Space Weather Prediction Center. And launch officials routinely keep a close eye on space weather before rockets take off.

"Different companies have their own criteria" for deciding whether or not a space weather event will impact their launch, Murtagh added.

James Spann, the head of space weather within NASA's division that studies the sun, also said that it's difficult to predict exactly how such a geomagnetic storm could've impacted Starlink. Because the storm wasn't all the severe, it's not unreasonable to think it would not have had an impact on the launch.

And though the loss of 40 satellites isn't ideal, Spann emphasized that the data NASA and NOAA will gain from observing how the Starlink satellites reacted the storm will help improve space weather modeling in the future.

"That is the silver lining," he told CNN Business. "We're going to use the data points to ensure that in the future the chances of success are even better than they already are now."

Still, GPS data from the Starlink satellites "suggests the escalation speed and severity of the storm caused atmospheric drag to increase up to 50% higher than during previous launches," SpaceX wrote in an update on its website. "The Starlink team commanded the satellites into a safe-mode where they would fly edge-on (like a sheet of paper) to minimize drag—to effectively 'take cover from the storm,'" according to the company.

But early data suggests that the added drag from the storm prevented the satellites from turning off the safe mode and "up to 40 of the satellites will reenter or already have reentered the Earth's atmosphere," the SpaceX post reads.

The company noted that the failed satellites shouldn't pose any risk to other satellites during their descent, and they should disintegrate as they slam into the thickest part of Earth's atmosphere so that they don't threaten any people or property on the ground.

All of those safety measures are by design, the company said. SpaceX has said it intentionally deploys its Starlink satellites at a lower altitude than their intended orbit so that if a satellite malfunctions, it wouldn't be left to fly uncontrolled through orbit for very long — a key space debris mitigation effort.

But deploying at a lower altitude may also be a key reason that these Starlink satellites were so badly affected by the geomagnetic storm.

And in a new filing with the Federal Communications Commission, which must approve satellite launches, NASA raised concerns that the sheer number of satellites that SpaceX has proposed could become a threat to the International Space Station and other important assets in space.

It's all about space weather

Every decade or so, the sun completes a solar cycle of calm and stormy activity and begins a new one.

Eruptions like solar flares and coronal mass ejection events — when the sun's outermost atmosphere spits out plasma and magnetic fields — can impact the power grid, satellites, GPS, airlines, rockets and astronauts in space. Space weather is known to cause disruptions in earthly communications systems by affecting radio frequencies.

Our current solar cycle, Solar Cycle 25, officially began in December 2019. Right now, we're leaving a period of relative calm and the current cycle is expected to reach its most active space weather phase in 2025.

On a scale from one to five, the geomagnetic storm that affected the Starlink satellites last week was a two, which is fairly mild, Murtagh said. The sun puts off "several hundred" storms of that magnitude every 11-year solar cycle, Murtagh said.

"The beautiful visible manifestation [of space weather] is the northern lights that everyone loves — that's the nice, pretty part. But the consequences, as we found out on Friday, can be quite significant to some of these technologies," Murtagh said.