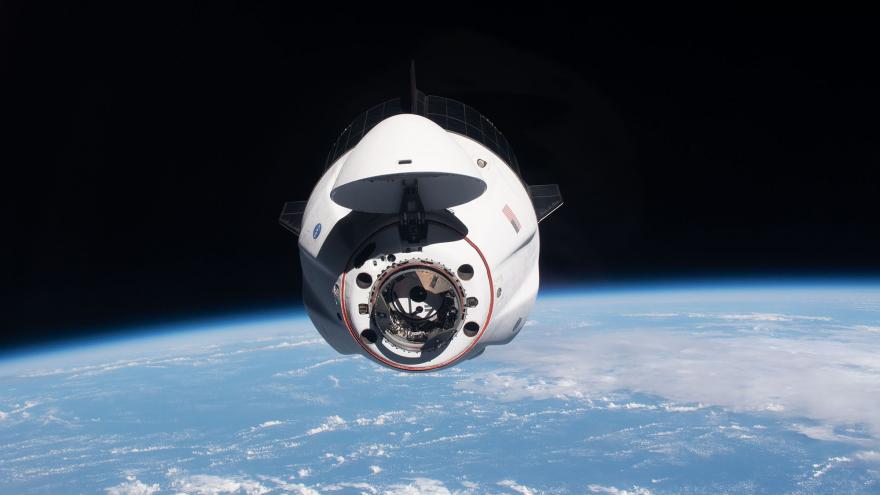 (CNN) -- Four astronauts splashed down off the coast of Florida aboard their SpaceX Crew Dragon capsule, capping off their six-month stay in space.

Their journey kicked off Monday just after 2 pm ET when the astronauts strapped into the Crew Dragon capsule, which had remained attached to the International Space Station since it arrived with the crew in April. The spacecraft spent nearly nine hours slowly maneuvering through orbit, approaching the thick inner layer of Earth's atmosphere before the Crew Dragon lit up its thrusters to safely slice into the air, deploy parachutes and splash down in the Gulf of Mexico around 10:30 pm Monday.

A fleet of rescue ships awaited their arrival and brought the four astronauts — NASA's Shane Kimbrough and Megan McArthur, French astronaut Thomas Pesquet of the European Space Agency, and Akihiko Hoshide from Japan — to safety.

"It's great to be back to planet Earth," Kimbrough was heard saying in the moments after splashdown on NASA's webcast.

During their stay in space, Kimbrough, McArthur, Pesquet and Hoshide oversaw numerous science experiments and even tested the first chile peppers grown in space. They also conducted spacewalks — in which they don the iconic puffy white spacesuits to exit the space station to work on its exterior — and endured some harrowing challenges, such as working through the misfire of a new Russian module that attached to the ISS and briefly knocked it out of position.

The trek home presented one last challenge: Issues with the toilet on board SpaceX's Crew Dragon capsule left the astronauts without a bathroom option during their trip back home. Instead, the crew was forced to rely on "undergarments" — essentially adult diapers — during the nine-hour journey.

During a press conference conducted remotely from the ISS on Friday, McArthur said using undergarments rather than the toilet is "suboptimal."

"But we are prepared to manage," she said. "Spaceflight is full of lots of little challenges. This is just one more that we'll encounter and take care of in our mission, so we're not too worried about it."

TAKE THIS QUIZ: Your body in space

Kimbrough, McArthur, Pesquet and Hoshide made their return to Earth before the next crew of astronauts was able to get to the ISS to replace them.

The goal of NASA and SpaceX's partnership for their jointly operated ISS missions is to keep the 21-year-old space station fully staffed, making maximum use of the orbiting laboratory while it's in operation. Keeping enough staff onboard was a constant pressure for NASA during the nearly 10 years that the United States did not have a spacecraft capable of getting astronauts to orbit. After the space agency's Space Shuttle program retired, it had to rely on its partnership with Russia and the country's Soyuz spacecraft for getting NASA astronauts to the space station.

The next SpaceX astronaut launch, called Crew-3, was delayed — first by weather issues and then by a "minor medical issue" with one of the astronauts. NASA said last week that it's expecting that medical issue to clear before takeoff, which could happen as soon as Wednesday.

NASA is also hoping to bring another launch provider on board: Boeing was contracted alongside SpaceX to develop its own crew-worthy spacecraft, but Boeing has been beleaguered by numerous testing and development hangups. At this point, its spacecraft, called Starliner, is years overdue and was most recently taken off the launch pad after issues with its propulsion system were discovered shortly before a scheduled test flight of the vehicle.