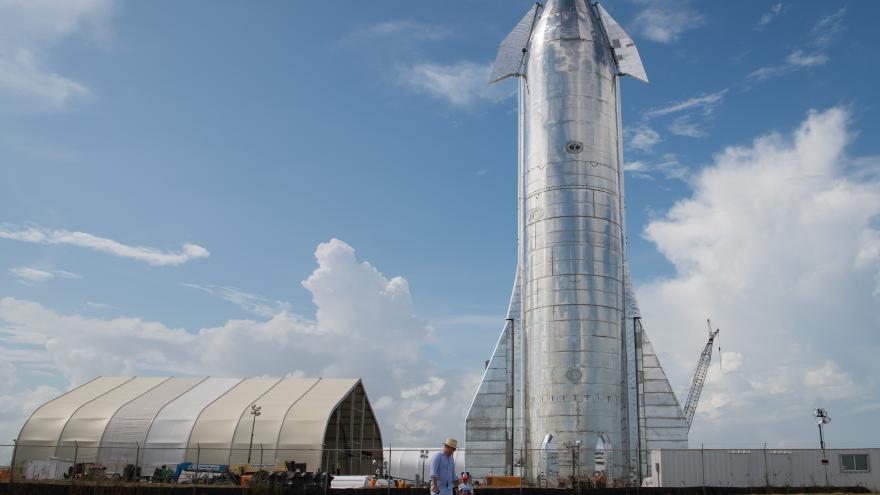 (CNN) -- SpaceX's Mars rocket prototype burstapart during a ground test,a setback for the company as it works to develop a spaceship capable of taking humans and cargo to deep space.

Engineers at a SpaceX facility in south Texas were running a test on Wednesday that was meant to check how well the vehicle, nicknamed Starship Mark-1, withstands high pressure when a metal cap on top of the vehicle burst off. Pieces of aluminum were flying, vapor spewed into the area and local SpaceX fanscaptured footage of the bulkhead landing nearby.

SpaceX said in a statement that there were "no injuries, nor is this a serious setback."

"The purpose of today's test was to pressurize systems to the max, so the outcome was not completely unexpected," the statement reads.

SpaceX representatives often reiterate after something goes wrong during testing that the company doesn't consider such incidences failures. Musk has said that expecting -— even embracing — failures during testing has helped propel SpaceX to its crowning achievements.

But Wednesday's incident could mean that SpaceX will already abandon the Starship Mark-1 prototype, which Musk showed off two months ago in a grand unveiling. He said in a tweet that engineers have already turned their focus to a newer test vehicle design, dubbed Mark-3.

One other Starship prototype is also under development in Florida, and they're all part of SpaceX's quest to create a spaceship that can launch massive satellite, take cargo to the Moon and, eventually, establish a human colony on Mars.

Musk has talked about building such a rocket for years. And SpaceX began putting significant time and resources into Starship's development early this year.

After conducting a few low-altitude tests of an earlier prototype, Musk unveiled Starship Mark-1 to a group of reporters and locals at an event in Boca Chica, Texas on September 28. Speaking from beneath the 160-foot-tall prototype, Musk said SpaceX would continue that test program by launching the vehicle on a much higher "hop test" — up to 65,000 feet — before landing it upright back on the ground.

In its statement, SpaceX said its plans havesince changed. Before Mark-1 erupted on Wednesday, the testing team had already decided not to try to fly the vehicle and instead was focused on building the next version, called Mark-3.

That vehicle will be designed to reach orbit, which requires speeds topping 17,000 mph.

It's not clear if the timeline Musk laid out for Starship's first orbital test flight still stands. In September, he suggested a prototype could reach orbit within a year — a remarkably quick time frame as far as rocket development goes.

He said in a tweet after the Starship Mark-1 incident that Mark-1 "had some value as a manufacturing pathfinder" but the design of the prototype SpaceX now plans to fly will be "quite different."

The CEO, who also wears the lead designer hat at SpaceX, has embraced failures during previous SpaceX development efforts in the past. He's even shared a reel of the company's many failed attempts to land a rocket booster before the company succeeded in 2015.