SpaceX moves ahead with Starlink satellite launch amid pandemic 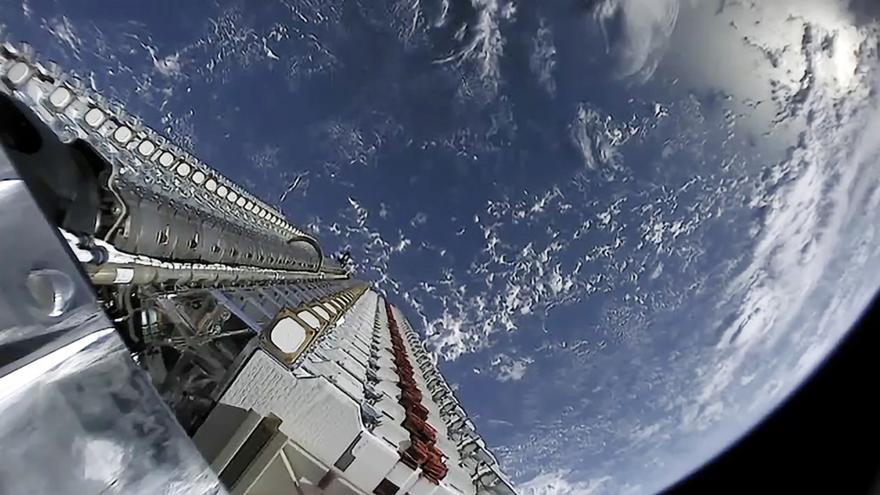 (CNN) -- While much of the world economy stands still, SpaceX is running full speed ahead.

The 60 Starlink broadband satellites rode atop one of SpaceX's Falcon 9 rockets, taking off from Florida's Kennedy Space Center at 3:30 pm ET. The devices are now coasting through orbit, where they will soon begin climbing to about 340 miles above ground, their operational altitude. This launch brings the total number of Starlink satellites in orbit to more than 400.

SpaceX has said the satellites will allow it to beam Internet directly to terminals that consumers will set up at their homes or offices. Service is expected to roll out in the United States and Canada this year, CEO Elon Musk has said. The company plans to eventually grow its constellation to more than 40,000 satellites, blanketing the entire planet in cheap, high-speed Internet connectivity.

If Starlink is successful, it could bring in billions of dollars of new revenue for SpaceX, Musk has predicted. But there's still a lot to prove: rolling out a reliable service and offering it at price points that make sense for consumers is something tech firms have tried and failed to do in decades past.

Last month, one of SpaceX's well-funded competitors, Softbank-backed OneWeb, filed for bankruptcy. The company lagged far behind SpaceX in deploying its constellation of internet satellites, and it had been struggling financially even before the Covid-19 pandemic dashed its efforts to secure new financing.

SpaceX and the broader US space industry have been designated "critical infrastructure" by the federal government, allowing much of their business operations to continue amid the global health crisis, even as stay-at-home orders have shuttered other industries.

SpaceX did not respond to requests for comment about its work during the pandemic.

The company has launched three Starlink missions so far in 2020. SpaceX also is preparing for its first-ever crewed mission next month. Two NASA astronauts will fly aboard a SpaceX rocket and capsule on a historic mission to the International Space Station on May 27, the space agency announced last week.

SpaceX was forced to delay the launch of a satellite for Argentina's space agency last month due to travel restrictions related to the pandemic. The company was also scheduled to launch next-generation GPS satellites for the US military this month, but the US Space and Missile Systems Center determined that launch could wait, citing Covid-19 concerns.

The 45th Space Wing, an arm of the US military that oversees missions from the Florida space hub, says it is determined to get as many rockets off the ground as possible to ensure the space industry doesn't collect a long backlog of launches.

Brigadier General Doug Schiess, the 45th Space Wing's commander, saidit is still evaluating launches on a case-by-case basis to ensure the safety of government workers required to be on site to provide weather monitoring and other services during launches.

About 200 government workerswere needed to support the Starlink mission, Schiess said — about 100 fewer than required for other types of missions. That's largely because SpaceX's Falcon 9 is equipped with an abort system that automatically destroys the rocket if it goes off course in order to prevent damage to infrastructure, Scheiss said. That eliminates the need for some government staff that would otherwise have to monitor the mission.

The 45th Space Wing will also help oversee SpaceX's crewed mission. That historic mission will mark the first time NASA astronauts have launched into space from US soil since the space shuttle program was retired in 2011.