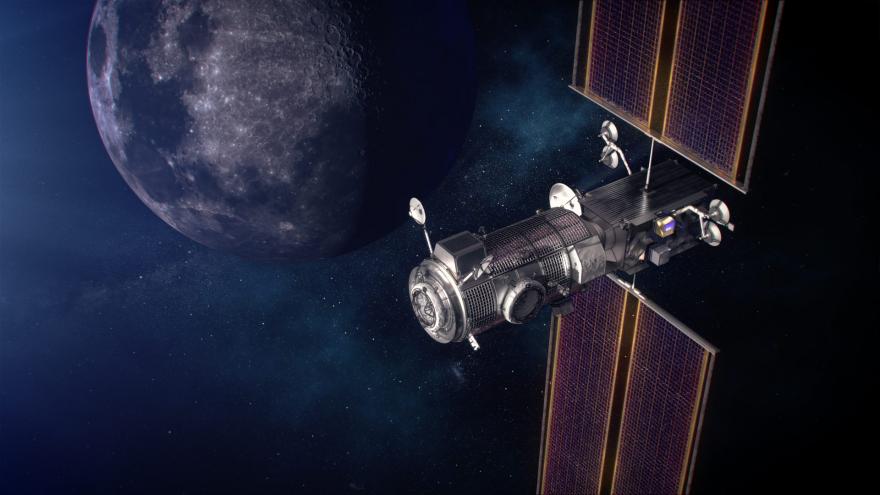 (CNN) -- NASA is giving SpaceX more than $330 million for a mission that will launch two key pieces of the Gateway, a space station that NASA plans to put in orbit around the moon as part of the space agency's Artemis program.

The Artemis program is the American government's plan to establish a permanent human presence in deep space.

SpaceX will launch "the foundational elements of the Gateway" — including a cylindrical module that will serve as astronaut living quarters and a large, box-shaped unit that will provide power and communications services to the space station — aboard one of its Falcon Heavy rockets "no earlier than May 2024," NASA said in a press release this week.

The deal makes clear that NASA's plans to establish a human settlement on the moon will rely heavily on SpaceX's rockets, which the company has spent years billing as cheaper alternatives to the rockets made by legacy launch providers such as United Launch Alliance, a joint venture between Boeing and Lockheed Martin.

The Falcon Heavy, which looks like three of SpaceX's workhorse Falcon 9 rockets strapped together, made its debut in 2018, and drew widespread attention for SpaceX CEO Elon Musk's decision to use his cherry red Tesla roadster as a dummy payload for the Falcon Heavy's inaugural launch.

Musk's car is still in orbit around the Sun.

NASA's Artemis program seeks to return a man and a woman astronaut to the lunar surface by 2024, marking the first time humans have set foot on the moon since NASA's Apollo program ended nearlyfive decades ago. The Artemis name pays homage to that lineage: In Greek mythology, Artemis is the twin sister of Apollo.

The Gateway space station is a key part of NASA's vision for that mission as well as countless future missions, as the agency is looking to establish a permanent lunar habitat. The Gateway, which will be about one-sixth the size of the International Space Station, will provide astronauts with a command center, work and sleeping quarters. Spacecraft that carry astronauts on lunar journeys will be able to dock with the space station, and from there, they'll be able to board a lunar lander that will ferry them from the Gateway to the lunar surface.

SpaceX — in addition to having its own, separate plans to establish a human settlement on Mars — is expected to support NASA's Artemis program in other capacities. NASA awarded SpaceX a contract for Dragon XL — an upgraded version of the capsule SpaceX currently uses to take astronauts and cargo to and from the ISS — to take supplies to the Gateway station.

SpaceX is also one of several companies competing for the contract to build NASA's Human Landing System, the vehicle that will shuttle astronauts from the Gateway to the moon's surface.