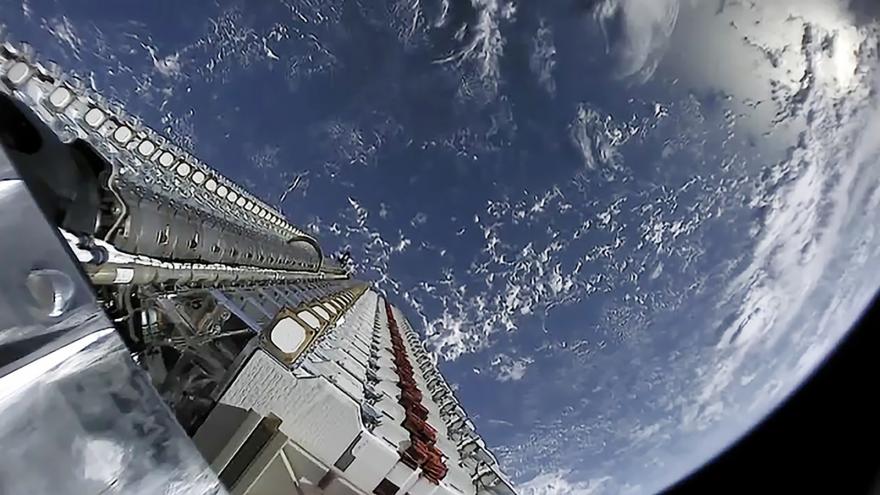 (CNN) -- The US government plans to give SpaceX nearly a billion dollars to beam internet from space to people across rural America, where three out of five people say access to broadband is still a pressing issue.

The company will receive a total of $856 million, one of the largest subsidies handed out by the Federal Communications Commission under a new program designed to encourage companies to extend broadband access into the United States' most underserved areas over the next 10 years.

SpaceX's win is notable because the company competed against more established internet service providers, such as Charter Communications and CenturyLink, which rely on traditional fiber optic cables to deliver high-speed internet to customers. SpaceX's Starlink internet service, which is currently in beta testing and is not yet fully operational, relies on an experimental swarm of nearly 1,000 satellites whizzing around Earth at more than 17,000 miles per hour as they beam the internet to high-tech antennas mounted on people's homes.

The FCC did award the bulk of the $9 billion worth of subsidies to more traditional providers. Charter, for example, received more than $1.2 billion to bring high-speed internet into more than 1 million neighborhoods. And the Rural Electric Cooperative Consortium, a joint bid from smaller regional companies, was awarded $1.1 billion to more than 618,000 neighborhoods.

Allowing SpaceX to participate in the subsidy program at all was controversial. Traditional telecommunications companies and some broadband advocates argued that SpaceX's Starlink network was too new and unproven. Essentially, the FCC placed a bet that SpaceX's Starlink service will work just as the company promises, but if that turns out not to be the case, it could mean more lengthy delays in getting internet coverage to some of the most in-need areas of the United States.

But, if SpaceX's Starlink service does work as intended, it could be a major boon for rural economies in the United States and abroad. That's because the company's unique satellite system is designed to blanket the entire planet in connectivity, rather than stringing cables to individual rural areas.

The Federal Communications Commission estimates that 21 million Americans — about 1 in 15 people — still lack access to high-speed internet. The actual number could be far higher, perhaps even double the FCC's estimate, according to a BroadbandNow study. And a 2018 Pew Research study found that high-speed internet access is a problem for nearly 60% of rural Americans.

The issues caused by the digital divide are more evident than ever in the Covid-19 era. Some families have been forced to sit in school parking lots so they can work remotely, search for jobs or attend online classes.

The problem with traditional high-speed internet service is that extending underground cables into areas where there aren't many customers is expensive, time consuming, and it doesn't make financial sense for carriers who are focused on short-term profits rather than long-term investments. That's why the FCC and a smattering of other government programs have worked for years to subsidize the upfront costs.

In fact, the FCC originally said satellite-based internet services wouldn't be able to get any subsidies. But the commission reversed course in June after SpaceX lobbied against that decision.

SpaceX is promising that its network will be just as fast as the best fiber-optic based services. Its satellites are flying much closer to the ground than most other telecommunications satellites, which the company says will eliminate the frustrating lag times.

For now, it's not clear exactly how well the network will function. Beta testers have reported top-of-the-line speeds, but they're also reportedly experiencing intermittent outages because SpaceX hasn't launched enough satellites to guarantee continuous coverage. It's also to be seen how affordable SpaceX's service will be. CNBC reported in October, citing emails shared with those who expressed interest in becoming Starlink customers, that the service could cost about $99 a month, plus a one-time fee of about $500 for the router and antenna.

If the Starlink network doesn't work as intended, the people in the rural areas that the network was meant to serve may never receive top-of-the-line internet service, said Shirley Bloomfield, the CEO of NTCA - the Rural Broadband Association, which represents hundreds of community-based telecommunications providers.

"People will never be able to get more government support to come in and build a more future-proof" network, Bloomfield told CNN Business. "We have to be focused on how do we do it right the first time."

Some policy experts, including Ernesto Falcon, senior legislative counsel at the San Francisco-based Electronic Frontier Foundation, a nonprofit open-internet advocacy organization, also argue that it doesn't matter if Starlink is successful or not. If Americans want sustainable high-speed service and, eventually, a 5G network, then fiber optic cables are the only solution, Falcon believes. And that's why he says RDOF funds should not have be used on alternative technologies.

"You don't have to replace [fiber optic] wires anytime in my lifetime once it's built. It will be something like my grandkids' kids could use," Falcon said.

But others, including FCC Commissioner Mike O'Reilly, who helped lead the push to allow SpaceX to join the FCC subsidy program, argue that Starlink could offer a one-stop-shop solution to a troubling problem.

"The true reality is: We don't have enough money to connect every home to fiber. It's not in the cards," he told CNN Business in an August interview.

And that, he said, is reason enough to take a risk on SpaceX, a company already well-known for its technological chops and proving its critics wrong.

And if the Starlink network is affordable and works well, O'Reilly said, the payoff could be massive. Not only would it bring coverage to the areas the FCC is targeting with its RDOF subsidies, it would bring connectivity to every person in the United States and possibly the world.

"The dirty little secret is — after we finish [RDOF] — we're probably looking at a pool of locations that are really expensive and really hard to serve, and nobody" wants to pay to bring in internet service there, O'Reilly said. "How do you get service to those areas that are hardest to serve and get them as quick as possible? Satellite is one of those options."

Even O'Reilly, however, acknowledges that, for the people in the areas Starlink is supposed to serve through this subsidy program, a lot is riding on the network's success.

It could "really cause heartbreak," O'Reilly said. "That's the hard part for a policymaker."