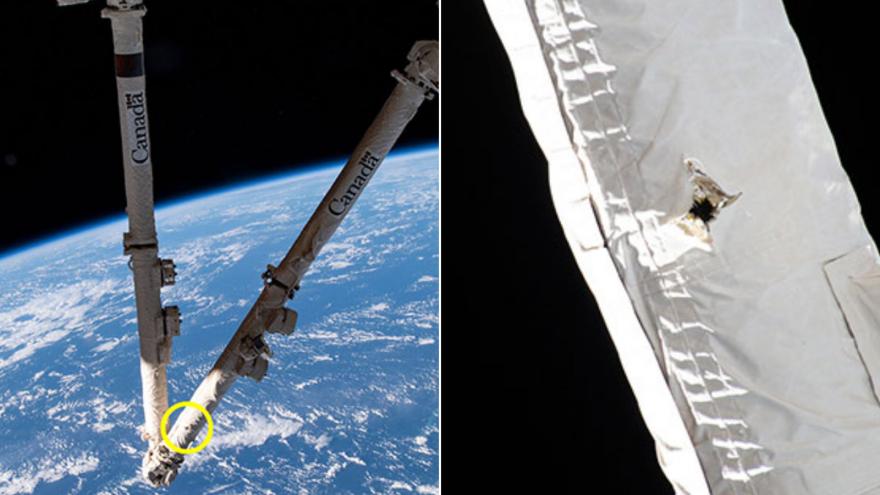 (CNN) -- A robotic arm located outside of the International Space Station has been hit by orbital debris, but it's still functioning.

The impact to Canadarm2, first noticed by NASA and the Canadian Space Agency during a routine inspection on May 12, punched a hole in the arm boom and its thermal blanket.

"Despite the impact, results of the ongoing analysis indicate that the arm's performance remains unaffected," according to a release by the Canadian Space Agency.

While the exact object responsible for this damage is unknown, the space station is at risk of impact from objects too small to be tracked as it orbits the Earth from 220 nautical miles away. These tiny objects could be pieces of rock, micrometeorites, dust particles or even flecks of paint that chip off of satellites.

About 23,000 objects about the size of a softball or larger are constantly tracked by space agencies to ensure that they don't collide with satellites or the space station.

Protecting the astronauts living on the space station is crucial.

"NASA has a long-standing set of guidelines to ensure the safety of Station crew," according to the release. "The safety of astronauts on board the orbiting laboratory remains the top priority of all Station partners."

The robotic arm is continuing to carry out planned operations as the analysis continues.

Orbital debris is also tracked to make sure there is no threat to spacecraft coming and going from the station.

En route to the station, the crew was actually warned when teams on the ground quickly realized the spacecraft might be at risk of colliding with a piece of orbital debris. However, the danger passed when tracking revealed the object was farther away than anticipated.

Although low-Earth orbit is more protective to the astronauts than if they were living in deep space, they are still exposed to some of the dangers of life in the space environment -- like orbital debris.