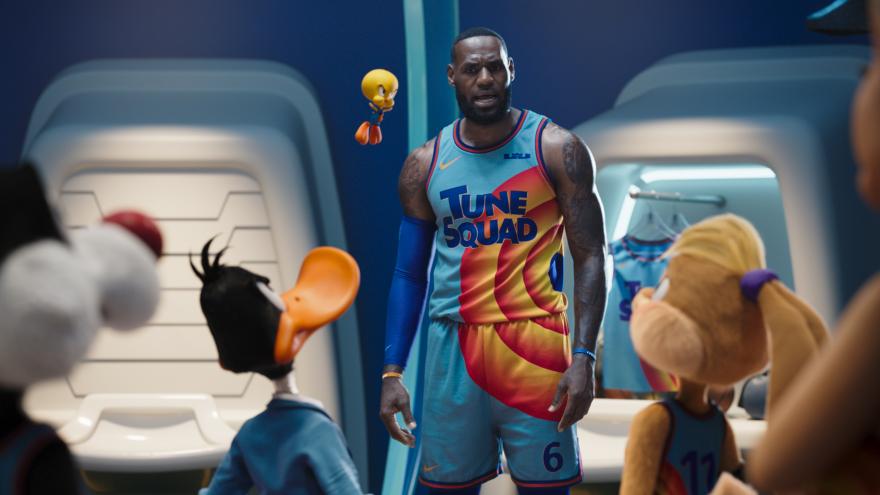 (CNN) -- Debates over LeBron James' greatness compared to Michael Jordan on a basketball court will continue in perpetuity, but "Space Jam: A New Legacy" won't fuel much chatter about who's the better actor. Putting James in Jordan's shoes, as it were, isn't a bad idea in theory, but despite the odd moment of inspired Looney Tune-acy, this reboot shoots a very loud and thudding airball.

A quarter-century after the first "Jam" assembled a team of NBA superstars to stave off an alien threat, this one journeys into inner space, while offering even more opportunities for synergistic tie-ins involving the vast Warner Bros. library. (The studio is a unit of WarnerMedia, as is CNN.)

The irony is that the movie owes perhaps its biggest thematic debt not to a Warner Bros. property but a Disney one, since the premise has a whole lot of "Tron" baked into it, with James getting sucked into the studio's "Serververse," where the villain is an artificial intelligence known as Al G. Rhythm (Don Cheadle, doing what little he can with not very much), who wants to team up with the King before turning against him.

There is also a big dollop of heart, in what feels like a very kid-movie flourish, involving James' relationship with his young son Dom (Cedric Joe), who doesn't share his dad's basketball passion for basketball, preferring to code and program video games.

Within the computer world, James must triumph over Al's team or risk losing his kid, finding allies (admittedly not his first choice) in the Looney Tunes characters, who don't share his enthusiasm for hard work and the fundamentals.

The buildup is thus again toward a game with higher stakes than the NBA Finals, pitting the Toon Squad against the algorithm's Goon Squad, though the video-game elements of that make it even harder to follow what's happening.

At two hours "A New Legacy"goes into what feels like overtime, which becomes numbing with this kind of sight-gag-driven construct. As a result, for the curious the movie might play better at home on HBO Max, where viewers can at least pause and appreciate the best visual gags that fly by.

Directed by Malcolm D. Lee ("Girls Trip") from a script credited to enough writers to fill a starting team plus a sixth man, there are a few clever moments. They include the Looney Tunes characters morphing from traditional cel animation into computer-generated forms, and a pitch meeting at Warner Bros. (naturally) where James is properly skeptical about the studio projects being thrown at him.

"Athletes and acting, that never goes well," he says.

Actually, James' acting isn't that bad, and he's certainly made an impact in Hollywood already as a producer (a credit he also holds here, along with "Black Panther's" Ryan Coogler) and budding media mogul. Still, carrying an entire movie -- even with all the animated mayhem around him -- feels like a lot to ask, particularly with the father-son dynamic that grounds the story.

As for the animation, which has already included odd second-guessing about a redesigned Lola Bunny (voiced by Zendaya), whatever the style, the overall effect falls flat.

The first "Space Jam" was hardly a classic, which should temper expectations. Yet even by that standard, this marketing-driven exercise too often plays like the Acme version of it.

James has put together championship-caliber teams in multiple cities, while studios have come to rely on the name recognition of reboots. While it's easy to see the appeal of wedding a current NBA superstar to such a familiar supporting cast, this time, the algorithm lets them down.

"Space Jam: A New Legacy" premieres July 16 in theaters and on HBO Max. It's rated PG.