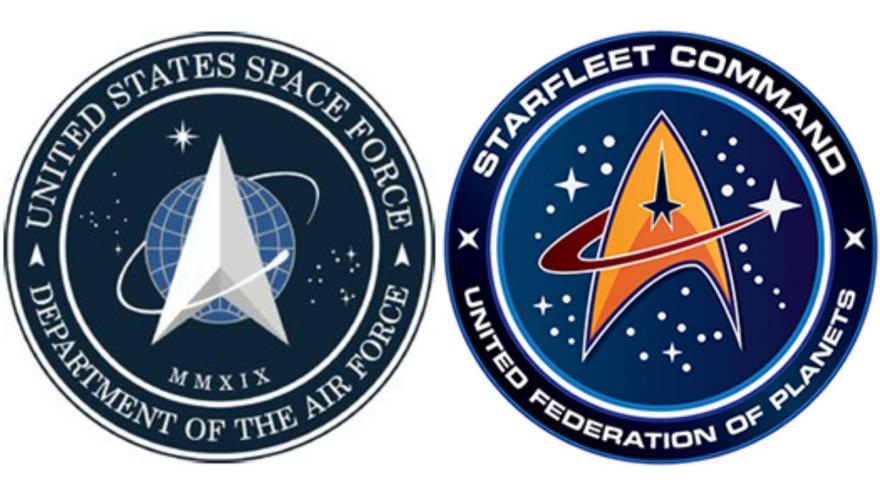 President Donald Trump unveiled the new US Space Force logo on Friday -- which seems to boldly go where one logo has gone before.

(CNN) -- President Donald Trump unveiled the new US Space Force logo on Friday -- which seems to boldly go where one logo has gone before.

Trump posted an image on Twitter of the insignia for the newest branch of the US military, drawing immediate comparisons of the new logo to the "Star Trek" Starfleet Starship duty insignia. The logo is also similar to the insignia of the Air Force Space Command, which was the precursor to the Space Force, hosting 16,000 active duty airmen and civilians.

"After consultation with our Great Military Leaders, designers, and others, I am pleased to present the new logo for the United States Space Force, the Sixth Branch of our Magnificent Military!" the 45th President tweeted.

A Space Force spokesperson said in a statement that the seal unveiled by Trump is, in fact, the new official logo.

"The US Space Force seal honors the Department of the Air Force's proud history and long-standing record of providing the best space capabilities in the world," the spokesperson said. "The delta symbol, the central design element in the seal, was first used as early as 1942 by the U.S. Army Air Forces; and was used in early Air Force space organization emblems dating back to 1961. Since then, the delta symbol has been a prominent feature in military space community emblems."

Maj. William Russell, a separate Space Force spokesperson, said Trump was the one who chose the new logo from a series of options presented by the Department of the Air Force.

The similarities between the apparent Space Force logo and the "Star Trek" logo were immediately apparent to many Twitter users -- including one who was on the classic science fiction show.

George Takei, an actor who played Hikaru Sulu in the "Star Trek" series and is a vocal opponent of Trump, responded to the tweet by saying, "Ahem. We are expecting some royalties from this..."

In December, when Trump signed the National Defense Authorization Act into law, he also created the newest military service and the first new service since the US Air Force came into being in 1947. The Space Force is a branch of the military under the Department of the Air Force -- as noted in the logo tweeted by Trump -- in the same way that the Marines are their own branch of the military but are within the Department of the Navy.

Gen. John Raymond, the previous commander of US Space Command and Air Force Space Command, told reporters at the time of the signing that officials weren't in a "rush" to create the branch's new insignia.

"There are, as you can imagine, thousands and thousands of actions that are going to have to take place, everything from what does the uniform look like, to the logo, all the way up to who's in the Space Force and who's not in the Space Force," Raymond said. "That work is being planned and will continue to be refined."

Raymond added that "it's going to be really important that we get this right. A uniform, a patch, a song, it gets to the culture of a service, and so we're not going to be in a rush to get something and not do that right."

"There's a lot of work going on towards that end -- I don't think it's going to take a long time to get that done -- but that's not something that we're going to roll out on day one," he added.