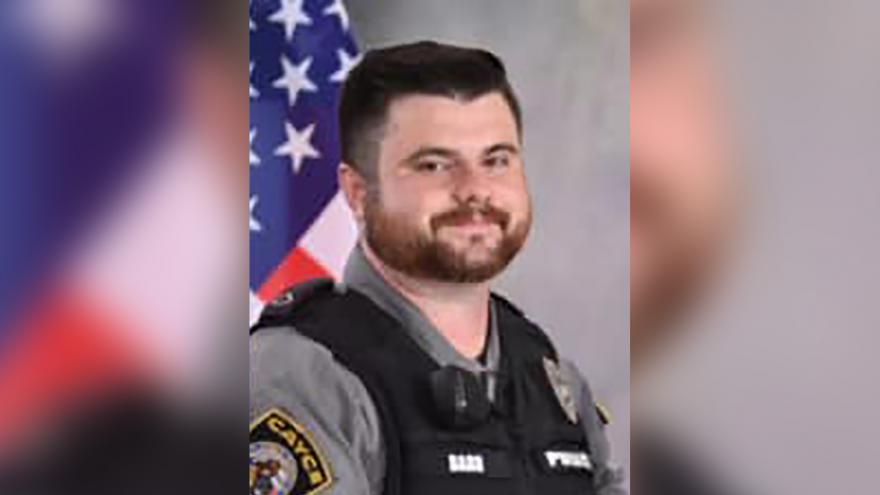 (CNN) -- A South Carolina police officer was killed in the line of duty while responding to a domestic disturbance Sunday, police say.

The unidentified suspect killed himself after officers attempted to negotiate with him for seven hours, Chief Chris Cowan said at a press conference.

Columbia Police Department negotiators worked for seven hours to reach a "peaceful resolution to the situation," but ultimately the suspect took his life, the chief said.

Barr was shot while responding to a domestic disturbance just before 3 a.m., the Cayce Police Department said on Facebook.

When officers arrived at the home, they found a male standing in the front yard, Cowan said.

As officers attempted to make contact with him, shots were fired from inside the home, and one of them struck Barr, the chief said.

Experts say that responding to a domestic disturbance call is one of the most dangerous circumstances for police, CNN previously reported.

FBI data show that 8.5% of the officers killed between 2011 and 2020 were responding to domestic disturbance or violence calls.

Several factors can make a domestic violence incident highly dangerous for responding officers, according to Jon Shane, a professor in the Criminal Justice department at John Jay College of Criminal Justice.

"The first is that you are entering into someone's private domain and you're bringing a very public face to a very private matter," Shane told CNN.

"People's emotions are already elevated due to whatever dispute they're involved in, and now you bring the coercive power of the state. People are angry and angry to see you, knowing that there's potential to be arrested and incarcerated."

Barr was 'committed' to his job

Barr was a firefighter, an emergency medical technician, and a police officer who was committed to his profession, Cowan said.

Barr joined the police department in 2016. He was promoted to the K-9 unit in October 2020 and "he loved his dog, Molly," the chief added.

"He cared about nothing else other than serving his community, and he was shot and killed this morning for no reason," the chief said. "There was no call for it. There was no reason for it. It was inexcusable."

During a brief news conference, Mayor Elise Partin said Barr was an important part of the city just outside of Columbia.

"Our hearts are breaking in Cayce," Partin said.