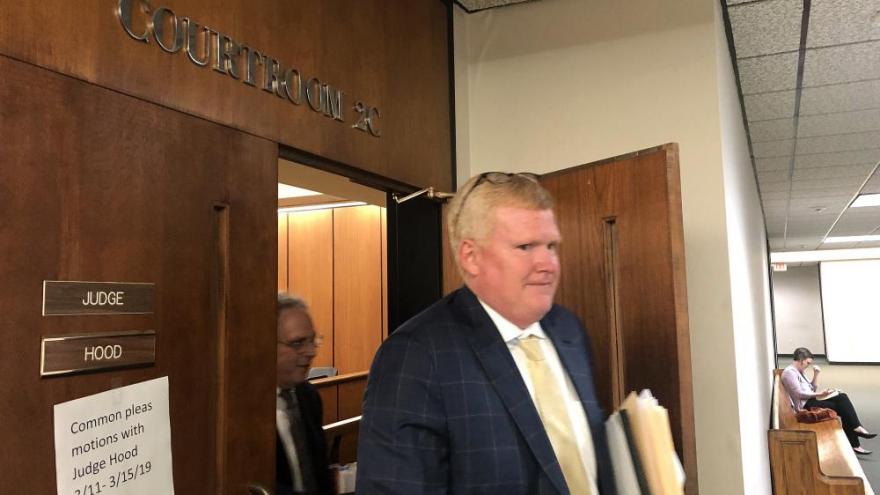 South Carolina attorney Alex Murdaugh, seen leaving a court hearing in 2019, resigns and enters rehab after being shot in the head months after deaths of his wife and son.

(CNN) -- The law firm of prominent South Carolina attorney Alex Murdaugh released a statement claiming he resigned from the firm prior to his shooting on Saturday, for what it says was a misappropriation of funds.

Murdaugh said he was shot Saturday, about three months after he discovered the bodies of his wife and son shot dead outside the family's home.

"His resignation came after the discovery by PMPED that Alex misappropriated funds in violation of PMPED standards and policies," the firm's statement read. "A forensic accounting firm will be retained to conduct a thorough investigation. Law enforcement and the (South Carolina) Bar have been notified."

CNN has reached out to Murdaugh's attorney for comment and has not heard back.

Murdaugh said Monday he planned to resign and begin an unspecified rehabilitation treatment, according to a statement obtained by CNN affiliate WCSC.

The statement released through attorney Dick Harpootlian said: "The murders of my wife and son have caused an incredibly difficult time in my life. I have made a lot of decisions that I truly regret. I'm resigning from my law firm and entering rehab after a long battle that has been exacerbated by these murders. I am immensely sorry to everyone I've hurt including my family, friends and colleagues. I ask for prayers as I rehabilitate myself and my relationships."

Murdaugh called 911 and reported being shot Saturday on a road in Hampton County, South Carolina, according to a statement from South Carolina Law Enforcement Division (SLED) spokesperson Tommy Crosby.

Murdaugh was taken to a hospital in Savannah, Georgia, where he was treated for a "superficial gunshot wound to the head," and no arrests had been made, the SLED statement said.

CNN affiliates WCSC and WCIV reported Jim Griffin, Murdaugh's attorney, said he was told by family members Murdaugh was changing a tire when he was shot. Griffin told WCIV a vehicle had passed Murdaugh and turned around when someone shot him.

A family spokesperson said in a statement the family expects Murdaugh to recover and asked for privacy, saying, "The Murdaugh family has suffered through more than any one family could ever imagine," a likely reference to the killings of Murdaugh's wife and 22-year-old son.

According to SLED, Murdaugh called 911 on June 7 and said he had arrived home to find his wife, Margaret, and son Paul shot dead outside of their home in Islandton, a small community about an hour north of Hilton Head Island. Colleton County Sheriff's deputies determined both had suffered multiple gunshot wounds.

SLED took over the investigation, but the case remains unsolved. Alex Murdaugh announced a $100,000 reward for information leading to the arrest and conviction of the parties responsible for their deaths.

"I urge the public to be patient and let the investigation take its course," SLED Chief Mark Keel said in a statement in June. "This case is complex, and we will not rush this or any investigation."

The family has been prominent in the South Carolina legal community for decades: Over 87 consecutive years, three generations of Murdaughs -- including Alex's father, Randolph Murdaugh III -- held the office of Solicitor of the 14th Circuit, which covers Allendale, Beaufort, Colleton, Hampton and Jasper counties.

According to the 14th Circuit Solicitor's Office, the current solicitor is the first outside the Murdaugh family to hold the elected position.

Alex's brothers Randy and John Marvin addressed the perception of the family prominence in an interview with ABC's "Good Morning America" in June.

"You see words like 'dynasty' used and 'power,' and I don't know exactly how people use those words," said Randy Murdaugh. "But we're just regular people, and we're hurting just like they would be hurting if this had happened to them."

"I can't imagine the horror that my brother's experiencing," he said.

Clarification: This story has been updated to reflect that Murdaugh's law license has been suspended