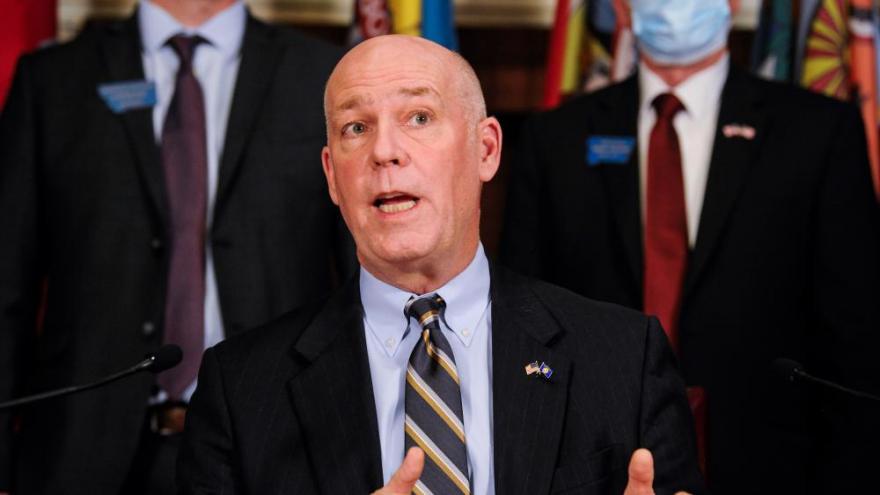 (CNN) -- South Carolina is joining Montana in ending federal pandemic unemployment benefits for its residents next month. The Republican governors of both states say the enhanced jobless programs are dissuading people from returning to the workforce and are creating labor shortages.

They are the first two states to halt participation in the historic federal expansion of jobless benefits, which Congress enacted last spring as the coronavirus pandemic began upending the national economy and costing millions of Americans their jobs.

The move, which may be replicated in other states as the economy springs back to life amid declining coronavirus cases, is necessary to address Montana's "severe worker shortage," said Gov. Greg Gianforte, a Republican.

He noted that he has heard from many employers that they can't find workers, particularly in the health care, construction, manufacturing, and hospitality and leisure industries.

"Incentives matter, and the vast expansion of federal unemployment benefits is now doing more harm than good," Gianforte said. "We need to incentivize Montanans to reenter the workforce."

South Carolina Gov. Henry McMaster made no mention of a bonus in his announcement Thursday. He echoed Gianforte's comments, saying that the supplemental federal payments, combined with state benefits, are larger than some workers' previous paychecks.

"What was intended to be a short-term financial assistance for the vulnerable and displaced during the height of the pandemic has turned into a dangerous federal entitlement, incentivizing and paying workers to stay at home rather than encouraging them to return to the workplace," he said.

Business owners and Republican national and state officials have warned over the past year that the enhanced federal unemployment benefits will keep out-of-work Americans on the sidelines longer, though several academic studies have found no evidence of that.

Congressional Republicans tried to create a federal return-to-work bonus last summer when lawmakers were debating whether to extend a $600 weekly enhancement before it expired in late July. Neither were ultimately enacted.

After Congress failed to renew the supplement, former President Donald Trump provided $300 in federal benefits for several weeks to the unemployed via executive action. South Dakota Gov. Kristi Noem, a Republican, turned down that offer, saying her state had already recovered most of its job losses.

While all the funding for the pandemic unemployment benefits programs comes from the federal government, states can opt to terminate their participation.

Though hiring has picked up in recent months, the nation still had 8 million fewer jobs in March than it did in February 2020.

Some 16.2 million Americans were collecting unemployment benefits as of mid-April, according to the most recent federal data.

Benefits to end in late June

Montana will stop issuing the $300 weekly federal enhancement to jobless residents starting June 27. The benefit, which Congress enacted in late December, was recently extended until early September as part of the Democrats' recent coronavirus relief package.

The state will also end payments to those in the federal Pandemic Unemployment Assistance and the Pandemic Emergency Unemployment Compensation programs on that date.

The former provides benefits to freelancers, independent contractors, the self-employed and certain people affected by the coronavirus, while the latter extends the duration of payments to those in the regular state unemployment benefits program.

Both were created by Congress in March 2020 and were extended to early September as part of the relief package Biden signed in March.

Also, Montana will reinstate its work search requirement as of June 27 -- a step other states have also taken in recent months.

There were nearly 23,300 unemployment claims filed in Montana the week ending April 24, including residents in the regular state program and the federal programs, according to state data.

South Carolina will terminate its participation in the programs on June 30.

Montana's unemployment rate was 3.8% in March, among the lowest in the nation and near its pre-pandemic lows. It hit a virus-fueled high of 11.9% in April 2020.

There are a record number of new job postings each week, said Laurie Esau, the state's labor and industry commissioner.

"But today, despite an influx of new residents into Montana over the last year, our labor force is some 10,000 workers smaller than it was before the pandemic," she said.

More than 14,000 jobs are posted on the MontanaWorks.gov portal, according to the state agency.

To provide an extra incentive, those who are receiving unemployment benefits as of May 4 and subsequently accept a job offer will receive a $1,200 bonus after they complete at least four paid weeks of work.

The state has nearly 82,000 open positions, according to Dan Ellzey, director of South Carolina's Department of Employment and Workforce. He noted that the hotel and food service industries are facing employee shortages that threaten their sustainability.

This story and headline have been updated to add that South Carolina will end its pandemic unemployment benefits.