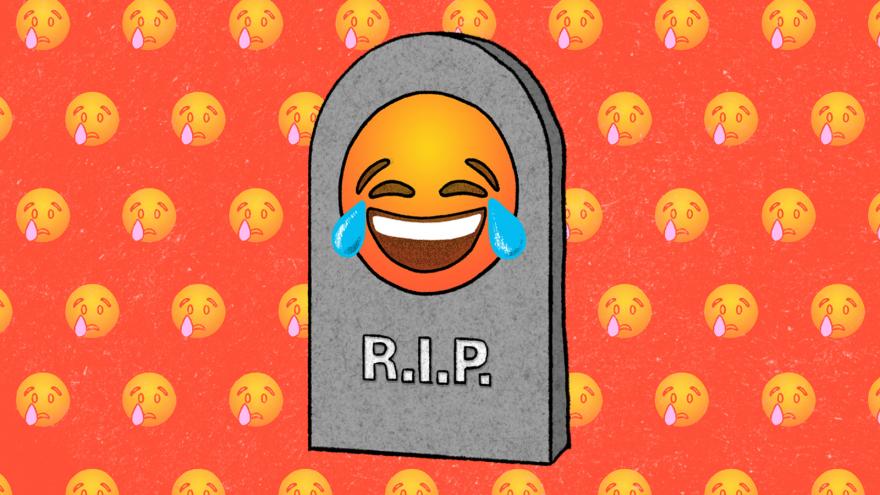 (CNN) -- Bad news for people who frequently use the ? emoji: It is no longer cool.

In recent weeks, two internet-savvy generations have been clashing in videos and comments on TikTok over the hallmarks of millennial culture that are now deemed uncool by Gen Z. The list includes skinny jeans (Gen Z verdict: set them on fire), side parts (Gen Z verdict: middle part or bust) and perhaps most painful of all, the popular laughing crying emoji that some millennials, myself included, use hundreds of times a day, or more.

"What's wrong with the laughing emoji[?]," one user asked in a TikTok comment. Another responded: "it's so off." On a different video of a woman saying she's cut back on using it after learning kids don't, one teen commented: "As a 15 year old I say you should use that emoji bc [because] we sure aren't going to."

"I use everything but the laughing emoji," 21-year-old Walid Mohammed told CNN Business. "I stopped using it a while back because I saw older people using it, like my mom, my older siblings and just older people in general."

For many Gen Z-ers, the ? emoji has become a popular replacement for conveying laughter. It's the visual version of the slang phrase "I'm dead" or "I'm dying," which signifies something is very funny. Other acceptable alternatives: the ? emoji (officially called "Loudly Crying Face"), or just writing "lol" (laughing out loud) or "lmao" (laughing my, well, you probably know the rest).

Seventeen-year-old Xavier Martin called the ? emoji "bland" and said "not too many people" his age use it. Stacy Thiru, 21, prefers the real crying emoji because it shows a more extreme emotion and feels more dramatic. She said she couldn't even find the laughing crying emoji on her iPhone's keyboard.

A similar emoji, called "Rolling on the Floor Laughing" (?), is also no longer in vogue. When asked about that emoji over a video call, Thiru visibly grimaced. "I don't like that one," she said. "My mom doesn't even use it."

"Face with Tears of Joy," the official name for the laughing crying emoji, is currently the most-used emoji on Emojitracker, a website that shows real-time emoji use on Twitter. It topped Emojipedia's list of the most-used emojis on Twitter in 2020, while the "Loudly Crying Face" took the number two spot. And it's had staying power: In 2017, Apple said the laughing crying emoji was the most popular in the United States.

"Tears of Joy was a victim of its own success," said Gretchen McCulloch, an internet linguist and author of "Because Internet: Understanding the New Rules of Language."

"If you indicate digital laughter for years and years in the same way, it starts to feel insincere. ... The hyperbole gets worn out through continued use," she said. That's why Gen Zers may be looking to fresh and novel ways to signal they're laughing through different ways.

Gen Zers -- born after 1996 -- grew up at a time when the internet was already ubiquitous and often in the palm of their hands. Some millennials, by comparison, remember a time before constant internet immersion; many launched into the world of emojis and internet jargon not through texting or social networks, but through AOL Instant Messenger. (Millennials were born between 1981 and 1996, according to Pew Research Center).

Anecdotally, older generations tend to use emojis literally while younger people get more creative, said Jeremy Burge, the chief emoji officer of Emojipedia, an emoji dictionary website. Emojipedia recently wrote a blog post that said: "It's common wisdom on TikTok that the laughing crying emoji is for boomers."

Gen Zers told CNN Business they like to assign their own meanings to emoji, which then spreads to others in their cohort, often through social media. For example, the emoji of a person wearing a cowboy hat (?) and the one of a person simply standing have both come to signify awkwardness. Others will string together a bunch of positive emoji, like stars, rainbows and fairies, and then pair them with something negative. "Our generation is very sarcastic," Martin said.

Sometimes teens and twenty-somethings use emoji -- like the laughing crying one -- ironically, such as by sending six or seven of them in a row to friends, to exaggerate it. But, overall, that emoji is a no-go.

"For Gen Z, it's like the same thing as having an Android," said Mohammed.