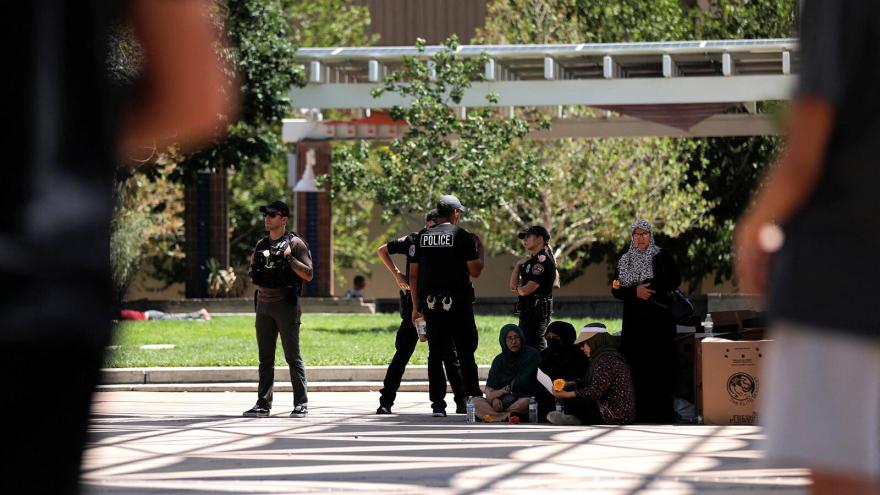 Members of the Albuquerque Police Department standby during a unity event following the murders of four Muslim men in Albuquerque, New Mexico.

(CNN) -- The son of a man suspected of killing at least two men in a recent spate of killings that terrorized Albuquerque, New Mexico, was ordered Monday to remain in federal custody on a charge tied to his father's case.

Shaheen Syed, son of Muhammad Syed, faces a federal charge of knowingly making false statements to investigators about the weapons and vehicle alleged to have been used in at least two of the killings.

During a detention hearing on Monday, Judge John Robbenhaar determined there was enough evidence to hold Syed in custody, according to Scott Howell, a spokesperson for the US Attorney's Office.

Syed's attorney, John C. Anderson, called the allegations that his client could be tied to the killings as "exceedingly thin and speculative."

The killings took place between November 2021 and August of this year, with the latest three occurring within the span of two weeks. Mohammad Ahmadi was the first victim in November 2021, then Aftab Hussein on July 26, Muhammad Afzaal Hussain on August 1 and Naeem Hussain's death taking place on August 5. All of the victims were of South Asian descent.

The elder Syed is being held on murder charges for two killings and is the primary suspect in the other two deaths. Muhammad Syed denied any involvement in the killings during an interview with police, according to an arrest affidavit.

In a motion to detain filed Friday, prosecutors outlined how Shaheen Syed -- also known as Maiwand Syed -- was "a flight risk and a grave danger to the community." The motion cited allegedly false information Syed told investigators when questioned about the shootings, whether he bought guns with his father and if he was in the suspected vehicle during the purchase of said guns.

Despite initially claiming he had not been in a Volkswagen Jetta at the time of purchase, investigators discovered Syed and his father went to a gun store in Albuquerque on July 15 and picked up two guns -- a pistol and rifle, according to the motion. "Officers found both of these firearms when a search warrant was recently executed at the defendant's home, and both of these firearms had been partially painted white," the motion read.

Additionally, investigators found Syed knowingly wrote down a false Florida address when buying a rifle on June 9, 2021, the motion read.

Investigators also analyzed cell tower data and found both Syed and his father's phones were in the general area of the August 5 killing of Naeem Hussain. "There appears to be no logical reason for the defendant to have just happened to have been in the vicinity of the murder scene so shortly after Mr. Hussain was murdered," the motion read.

A court hearing for Syed's father, Muhammad Syed, was postponed until Wednesday as the case was moved from the Bernalillo County Metro Court to District Court.

Muhammad Syed is expected to appear for a detention hearing Wednesday afternoon. He has been charged with murder for the July 26 killing of Aftab Hussein and the August 1 killing of Muhammad Afzaal Hussain.