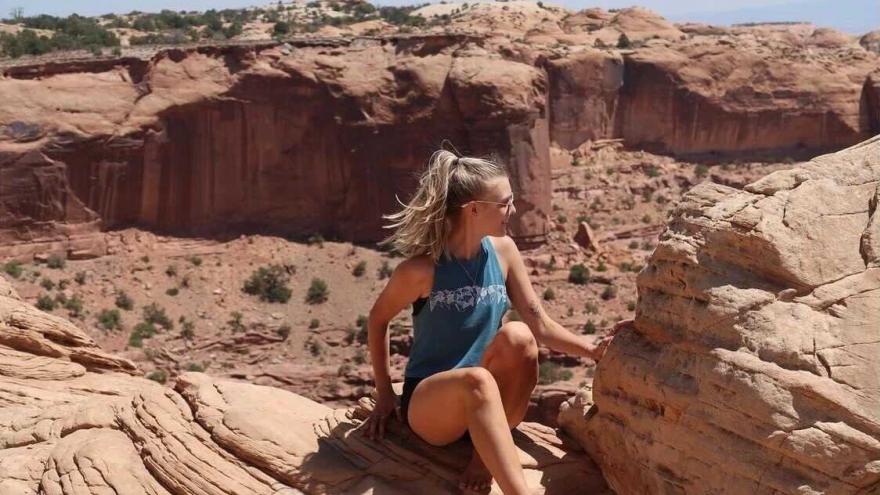 (CNN) -- The mother of Gabby Petito says she believes Brian Laundrie's parents know more about their son's whereabouts than they've yet revealed as authorities search for him.

"Somebody needs to start talking," Nichole Schmidt said in an exclusive interview on the "Dr. Phil" show that aired Tuesday.

"I do believe they know a lot more information than they're putting out there," she said, after host Phil McGraw asked whether she thinks the Laundries know where their son is.

Schmidt appeared on the show with Gabby's father, Joe Petito, and their respective spouses to talk about the death of their daughter, whose remains were found in Wyoming on September 19 after Gabby and Laundrie took a cross-country van trip.

The attorney for Laundrie's parents, Steven Bertolino, has said they don't know where their son is and haven't heard from him since he left their Florida home around mid-September.

Authorities say Laundrie returned from the road trip alone to his parents' home on September 1, and Petito's family reported her missing September 11 after they couldn't contact her. When police visited the Laundries' home that day, they were told to contact the family lawyer, authorities said.

Bertolino has previously said Laundrie's parents are "remaining in the background" and would not comment on the advice of counsel. Bertolino also canceled a planned September 21 news conference, saying he did so at the FBI's request.

Though authorities have not explicitly connected Laundrie to Petito's death, they are looking for him, in part over a federal arrest warrant accusing him of illegally using another person's debit card.

Before Petito's parents reported her missing, they thought both their daughter and Laundrie had disappeared, Joe Petito told McGraw in the interview aired Tuesday.

Schmidt and Joe Petito called and texted Laundrie's mother and "any phone number that I could get for that family," Joe Petito said.

"A normal parent, when you text someone that you're going to call the cops because you can't find your child, they would reply. No response, no nothing," he said.

Bertolino declined to comment Wednesday on the "Dr. Phil" interview.

In late September, Laundrie's parents released a statement through their attorney, saying, "Chris and Roberta Laundrie do not know where Brian is. They are concerned about Brian and hope the FBI can locate him. The speculation by the public and some in the press that the parents assisted Brian in leaving the family home or in avoiding arrest on a warrant that was issued after Brian had already been missing for several days is just wrong."

The "Dr. Phil" show was expected to air more of the interview Wednesday.

Gabby Petito, 22, and Brian Laundrie, 23, spent their summer traveling in her white van through the American West while she posted about their adventures across social media.

The posts abruptly stopped in late August, and Laundrie returned to his parents' Florida home alone in the van on September 1, according to police.

Schmidt told McGraw that she didn't know the van was at the Laundries' home until September 11, after she reported that Gabby was missing.

"A detective came to my door and let me know that the van was in Florida," Schmidt said.

Joe Petito also expressed frustration over what police said was the Laundries' initial response to authorities' inquiries, which was to direct them to an attorney.

"I mean, that's not how you parent," Joe Petito told McGraw.

On September 17, Laundrie's parents told investigators they last saw him leaving their North Port, Florida, home on September 14 with a backpack, and told them he said he was going to the nearby 25,000-acre Carlton Reserve, according to police.

But on Wednesday, Bertolino, the attorney for Laundries' parents, told CNN that upon further communication with the FBI, "we now believe the day Brian left to hike in the preserve was Monday, September 13."

Investigators have since spent days searching for Laundrie at the reserve outside Venice, Florida.

In the "Dr. Phil" interview that aired Tuesday, Joe Petito said he believes Laundrie is alive and hiding.

"Because he's a coward. Flat out. I'd use some other words, but I can't use them on your show," Joe Petito said.