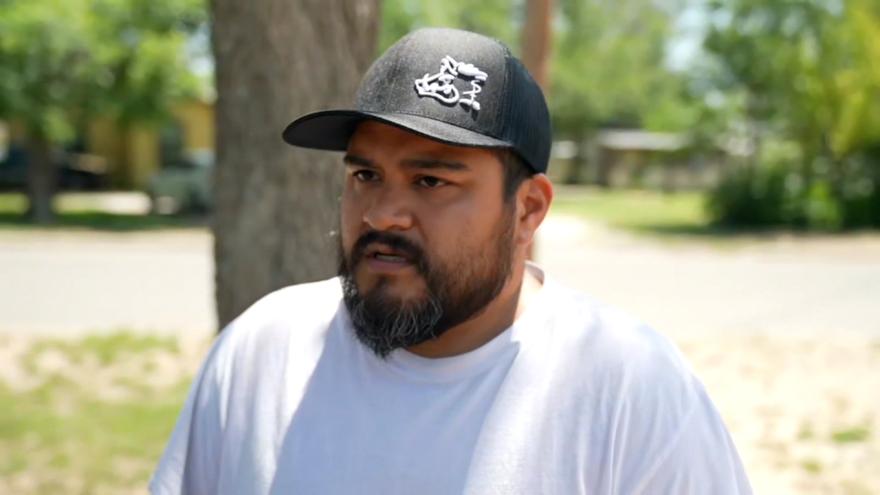 (CNN) -- Alfred Garza was outside Robb Elementary School on Tuesday as the massacre unfolded, trying to stay calm even as other parents were panicking so authorities could "do their job like they asked us to," hoping they could quickly get his daughter out of harm's way.

Inside, an 18-year-old gunman shot and killed 19 children and two teachers, a bloodbath that cost the life of Garza's 10-year-old daughter, Amerie Jo.

Now after the news conference authorities gave Friday, revealing that the first officers entered the school more than an hour before the gunman was killed, Garza said he's in "disbelief."

"It doesn't take a genius to figure out that it just took too long to get in there and, you know, had they gotten there sooner, and someone would have taken immediate action, we might have more of those children here today," he told CNN. "Including my daughter."

The most comprehensive details yet about the police response -- confusing and contradicted in the first few days -- were provided Friday. They highlighted a stunning gap of police inaction that has angered grieving families and the shattered community of Uvalde, Texas.

"We were asking and begging (authorities) to do something," Jennifer Gaitan, whose daughter was in the school during the shooting, told CNN on Friday night, adding one officer had a physical confrontation with her. "I feel like they were not concerned about the real trauma that was happening inside."

"They waited too long because I was out here. And I'm not the only parent that witnessed it."

At the news conference, Texas Department of Public Safety Director Steven McCraw said the first Uvalde police officers entered the school roughly two minutes after the gunman -- and more than an hour before he was eventually killed.

In that more than 70-minute window, other officers arrived inside the building, McCraw said. They were calling for more resources, equipment and negotiators, among other things -- but not breaching the doors of the classroom where the shooter Salvador Ramos was holed up.

At one point -- more than 45 minutes before the gunman was killed -- up to 19 officers were standing in the hallway.

The official who made the decision for officers not to breach the classroom was the school district police chief, officials said Friday.

These are the victims of the Texas school shooting

The gunman came out of a closet

The decisive action was taken when a unit of border patrol agents arrived at the scene. When they entered the classroom, the gunman came out of a closet and began firing, a source familiar with the situation told CNN.

One of those agents was holding a shield and was followed by at least two others who engaged the shooter, a US Customs and Border Protection official said.

The gunman is believed to have waited for the agents to enter the room, then kicked open the closet and began shooting, the source said.

The Washington Post first reported details on the gunman emerging from the classroom closet.

Law enforcement shot and killed Ramos at roughly 12:50 p.m. -- more than an hour after he entered the school building and began shooting into the adjoining classrooms, McCraw said.

The Uvalde School District police chief -- who McCraw said made the decision not to breach the class door, but did not mention by name -- is Pedro "Pete" Arredondo.

"A decision was made that this was a barricaded subject situation," McCraw said of the incident commander's "thought process" at the time.

"From the benefit of hindsight where I'm sitting now, of course it was not the right decision," McCraw said of the call not to confront the shooter. "It was the wrong decision. Period."

McCraw declined to comment on whether Arredondo was on scene during the shooting. CNN attempted to reach Arredondo at his home on Friday, but there was no response.

At previous news conferences hours after the shooting, the chief said the gunman was dead but provided little information on the attack, citing the investigation and taking no questions.

Texas Gov. Greg Abbott said Friday he wants a full accounting of what happened but added he has no say in whether the school district's police chief should be fired.

"As far as his employment status is concerned, that's something that is beyond my control and I have no knowledge about," the governor said, adding, "Every act of all of those officials will be known and identified and explained to the public."

Guidelines on handling active shooter situations in the state's commission on law enforcement training manual that was obtained by CNN say an "officer's first priority is to move in and confront the attacker."

The 2020 manual says carrying out that first priority and confronting the shooter "may include bypassing the injured and not responding to cries for help from children."

"As first responders we must recognize that innocent life must be defended," it says. "A first responder unwilling to place the lives of the innocent above their own safety should consider another career field."

All law enforcement officers in Texas are trained on those guidelines.

"Somehow, someway, someone needs to answer for, you know, what was done," Garza, the young victim's father, said, calling for accountability for the way authorities responded. "When somebody out here does something wrong, they have to pay for it so what is the law got to pay, whoever was responsible, how are they going to try to make it right?"

"Somebody has to be held accountable. Somebody was wrong," he added.

So far, two Uvalde funeral homes have announced visitation and funeral plans for several of the shooting victims, including Amerie Jo, according to posts on their websites.

"My daughter, she's gone and we're trying to lay her to rest and for her to be at peace," Garza said.