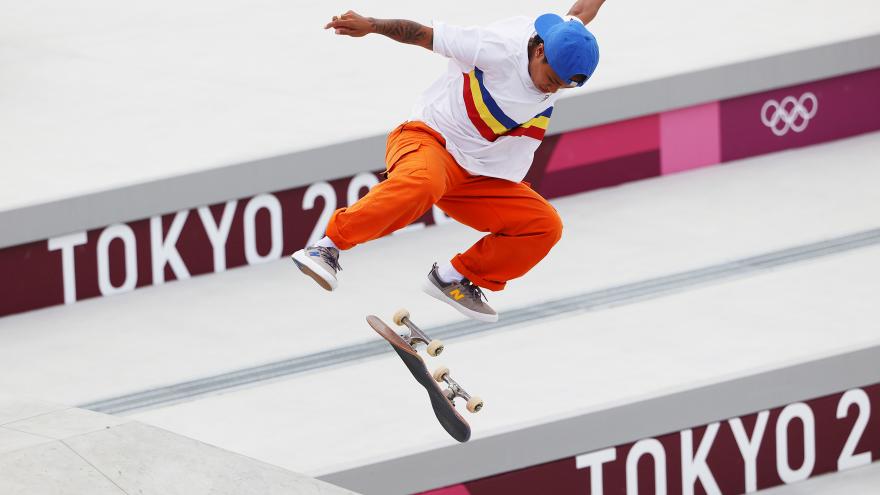 (CNN) -- Skateboarding is an Olympic event this year for the first time in the history of the Games.

When Tokyo organizers first recommended that skateboarding be added to the lineup, thousands of people signed a petition asking the International Olympic Committee to decide otherwise. Once it became official, many in the skateboarding community reacted with disdain.

Ask any skater and they'll tell you skateboarding isn't a sport so much as a lifestyle, a community, a state of mind. Over the years, it's battled an outlaw reputation, persisting even as skateboarders were allowed few spaces where they could skate freely.

For skateboarding to go from the counterculture to the most mainstream of sporting events is, to a certain subset of skaters, selling out.

"What people are against, what they're worried about is that they're going to lose a little bit of that freedom to explore," said Neftalie Williams, a postdoctoral scholar at the University of Southern California and a visiting fellow at the Yale Schwarzman Center who studies skate culture.

For other skaters, however, Olympic skateboarding is an inevitable next step for a multibillion dollar industry with major professional competitions. More importantly, it has the potential to transform how the world seesskateboarding -- and people who skate.

Here's why some are welcoming the sport's inclusion.

It's expanding the platform for marginalized skaters

Some of the most vocal arguments against Olympic skateboarding have come from men and male-dominated spaces.

It's a reality not lost on Adrian Koenigsberg. She's the founder of Quell Skateboarding, a media outlet dedicated to increasing the visibility of women, gender non-conforming people and other marginalized skateboarders.

Men, Koenigsberg says, have always had the platforms and the opportunities to express themselves through skateboarding. They've dominated the covers of magazines, been able to secure big-name sponsorships and had contests to compete in that women didn't.

While the landscape has started to change, it's hard to deny the opportunity that the Olympics affords women and LGBTQ skateboarders.

"For a very long time, our history as nontraditional skateboarders has been erased in media, so it is really exciting right now to see that playing out in the Olympics and having that public space," she said. "Because for so long, we have had to fight for those public spaces and any sort of visibility."

The Olympics are one of those rare occasions where women's sports seem to garner just as much attention, if not more, than men's sports. When Japan's Momiji Nishiya and Brazil's Rayssa Leal, both 13-year-old girls, took home gold and silver in last week's street competition, a global audience was cheering them on.

"That's a really awesome thing to see, especially for young people who are feeling those same feelings, where they don't quite fit into one gender or another," Rector said.

It's exposing more people to skateboarding

The Olympics also have the potential to introduce skateboarding to people who otherwise might not have engaged with the sport.

For staff members at the iconic KCDC Skateshop in Brooklyn, skateboarding is a vehicle for building self-confidence, learning to overcome challenges and expressing yourself creatively. That even a few more young people might reap those same benefits is reason to applaud its inclusion at the Olympics,said shop owner Amy Ellington.

"If that means that a kid in some small town is able to be exposed to that and get what we feel about skateboarding because they saw skateboarding in the Olympics, it's such a positive thing," she said.

Nathan Hutsenpiller, KCDC's shop manager, is under no illusions about the limitations of the Games. Contest skating is just a narrow slice of all that skateboarding encompasses. He feels that being judged on tricks and routines does something of a disservice to a sport as subjective as this one.

But he knows that were he a kid right now, he would love to see skateboarding in the Olympics.

It could change skateboarding's reputation

While skateboarding is ever popular in the US, the sport faces challenges here and around the world. Some communities have few, if any, places to skate, while others penalize skaters for daring to ride in public spaces.

Even in Japan, where the inaugural Olympics skateboarding competitions are being held, skateboarding was long considered dangerous and those who did it were seen as rebels and misfits. Though the arrival of the Olympics has somewhat shifted the country's attitudes toward skateboarding, it's still frowned upon in some public places.

Seeing the International Olympic Committee recognize skateboarding as a sport and watching skaters from all kinds of backgrounds compete in Tokyo could be a game changer for countries where skateboarding is still discouraged.

"That's what the opportunity is: For people to gain a new level of respect for all of us," Williams added. "Skateboarding is individual, and it's collective. We individually skate, and as we grow we add to the collective of who it looks like and the histories that we have."

When Williams hears from people who don't feel skateboarding belongs in the Olympics, he's reminded of a catchphrase popularized by a legendary Los Angeles skate collective: "Never stop hopping fences."

For skateboarding as a culture to shy away from as an institution as powerful as the Olympics would be to go against so much of what skating stands for: pushing boundaries and unlocking potential, he said.

"If we stop exploring all the avenues, we wouldn't be skateboarders," Williams said.

What's beautiful about skateboarding, Williams says, is that it can coexist in a myriad of ways. It can be an opportunity for elite athletes to flex their muscles, it can be a creative outlet expressed on city streets and it can be a fun way to spent time with friends.

There may come a time when skateboarders decide the Olympics no longer serves their best interests, Williams says. But for now these Tokyo Games offer a chance to redefine the sport and allow a broader range of skaters to see themselves represented on a global stage. And that, he says, is what the spirit of skateboarding is really about.