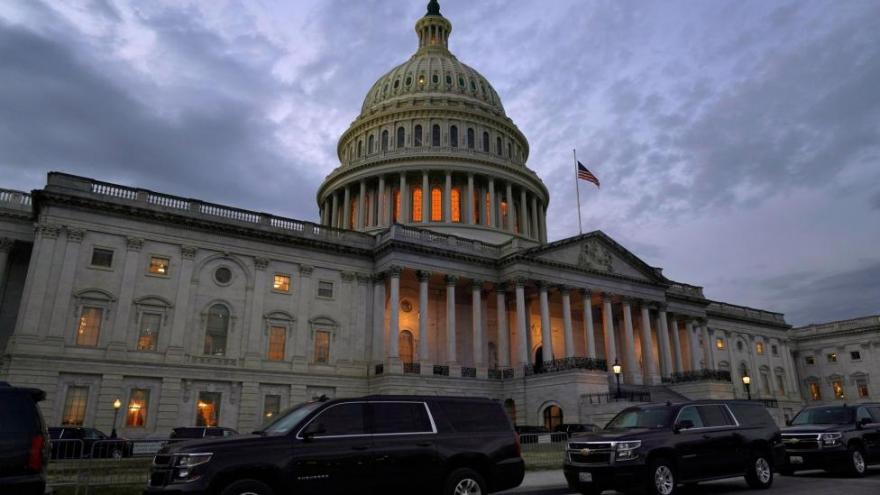 Dusk falls over the Capitol, Monday, Dec. 21, 2020, in Washington. Congress will count the Electoral College votes in a joint session of Congress on January 6, which represents Trump's final chance to try to overturn the election result he lost to Biden.

(CNN) -- When Congress met to tally the results of the 2004 presidential election, then-Sen. Barbara Boxer stood alone on the Senate floor to object to President George W. Bush's reelection victory in Ohio over Democrat John Kerry, forcing the House and Senate to vote for only the second time in a century on whether to reject a state's Electoral College votes.

It's the same scenario that could play out next month with President Donald Trump publicly urging his supporters in Congress to object to President-elect Joe Biden's victory in battleground states that expanded mail-in voting amid the coronavirus pandemic.

A group of House Republicans is preparing to object, and they need at least one senator to join them to force the chambers to vote on the matter. While Senate Majority Leader Mitch McConnell has privately urged Senate Republicans to steer clear, several senators have declined to rule out taking part, and incoming GOP Sen.-elect Tommy Tuberville of Alabama has left open the possibility he will join the effort.

Democrats and even some Republicans are warning against a challenge, despite the precedent laid by Boxer. In an interview with CNN, Boxer said that the circumstances are totally different this year, when Trump and his allies are seeking to overturn a national election result, than when she joined with then-Ohio Democratic Rep. Stephanie Tubbs Jones to object to Kerry's loss.

"Our intent was not to overturn the election in any way. Our intent was to focus on voter suppression in Ohio," said the retired California Democrat, who says her objection was her proudest moment on the Senate floor. "They're talking about the vote that the presidency was stolen from Donald Trump. It's not even a close comparison."

Congress will count the Electoral College votes in a joint session of Congress on January 6, which represents Trump's final chance to try to overturn the election result he lost to Biden. In reality, Trump's Republican allies have virtually zero chance of changing the result, only to delay the inevitable affirmation of Biden as the Electoral College winner and the next president.

That hasn't stopped Trump -- who has spread baseless conspiracy theories to falsely claim he won the election -- from pressing for Congress to dispute the result next month. Just before Christmas, Trump hosted House Republicans at the White House who have been spearheading the effort to object to the Electoral College results, led by GOP Rep. Mo Brooks of Alabama.

"I believe we have multiple senators, and the question is not if, but how many," Brooks said last week.

Brooks said the Republicans are preparing to object to Biden's win in as many as six states, which would force a dozen hours of debate on the House and Senate floors, turning the counting of Biden's victory into a political circus.

In order to force a vote to challenge a state's election results, however, a senator must join with a member of Congress in writing to object to the results. McConnell, who has recognized Biden's victory, has warned his conference not to join the House GOP effort and force the Senate GOP conference to take a politically toxic vote on whether they're siding with Trump or not.

But Tuberville, who beat Trump's former Attorney General Jeff Sessions in the Alabama Republican primary, left the door open last week to objections to the Electoral College results. Tuberville's comments prompted Trump to tweet multiple stories about the new Alabama senator potentially defying McConnell and speak to him over the weekend.

"I spoke to a great gentleman, Tommy Tuberville, last night, and he is so excited," Trump told Rudy Giuliani during a brief call to Giuliani's WABC radio show on December 20.

"He said, 'You made me the most popular politician in the United States,'" Trump added. "He's great."

Should Tuberville or another senator join the House objections, the two chambers would separate and debate each state's objection for two hours before voting. Because Democrats control the House, the effort has effectively zero chance of succeeding, and even in a Republican-controlled Senate, numerous Republicans have said there was not widespread fraud.

"In the Senate, it would go down like a shot dog," South Dakota Sen. John Thune, the No. 2 Senate Republican, said last week. "I just don't think it makes a lot of sense to put everybody through this when you know what the ultimate outcome is going to be."

The joint session to count the Electoral College votes on January 6 will be led by Vice President Mike Pence, who attended Monday's White House meeting with Trump and House Republicans, raising questions about how he will handle being in the awkward position of affirming Biden's victory over his own presidential ticket.

It's the same position that former Vice President Al Gore faced in 2001 following his razor-thin loss to Bush that came down to a disputed recount in Florida. During that vote, House Democrats protested the Florida result, but no senator objected, and the effort died.

That's also what happened in 2017, when a group of House Democrats objected to Trump's win in several states, citing Russia's election interference and problems with voter suppression. No senators joined the House members, however, and Biden -- who was presiding over the session in his role as president of the Senate -- gaveled down and dismissed the objections, certifying Trump as the winner.

"We were trying to focus attention on (Russian President Vladimir) Putin's efforts to undermine and sabotage the American election," said Maryland Rep. Jamie Raskin, one of the Democrats who raised an objection on the floor in 2017. "There's certainly a lot more evidence of Vladimir Putin's cyberattacks on the DNC and the (Hillary) Clinton campaign and efforts to manipulate American public opinion through social media than there's been of any fraud or corruption in the 2020 election."

"If any Republicans did it, it's clearly not the first time it's been done," House Minority Whip Steve Scalise, who has yet to acknowledge Biden as President-elect, said last week. "Every Republican president in the last three terms have been objected to by Democrats."

'People wanted to strangle me'

In 2005, Boxer joined forces with Tubbs Jones to protest Bush's victory in Ohio, which was the decisive state in Bush's 2004 election victory against Kerry.

Since the Electoral Count Act was passed in 1887, it was only the second time a protest had forced the two chambers to vote on accepting a state's the Electoral College result, according to the Congressional Research Service. The first was over a single "faithless" elector from North Carolina who cast a vote in 1969 for George Wallace instead of Richard Nixon. That objection was also rejected by both chambers.

Boxer said that Tubbs Jones, who died in 2008, convinced her to join the 2005 objection by showing her the problems that took place with Ohio's votes, including hours-long lines at polls, broken voting machines and high rejection rates for provisional ballots in the state's African American communities.

"This objection does not have at its root the hope or even the hint of overturning the victory of the president," Tubbs Jones said on the House floor when the two chambers separated to debate. "But it is a necessary, timely and appropriate opportunity to review and remedy the most precious process in our democracy."

In the Senate, Boxer's fellow Democrats spoke in support of addressing problems with voter suppression. But when it came time to vote, only Boxer cast a vote to sustain the protest. She lost 74-1.

In the House, the vote was 267-31 against the objection, and Ohio's votes were counted.

"It was one of my proudest moments, even though I stood alone," Boxer told CNN. "I was very unpopular that day in the Senate -- people wanted to strangle me."

In the weeks after they had raised the Electoral College objection, Boxer and Tubbs Jones joined with then-Sen. Hillary Clinton to introduce new voting rights legislation, though it didn't advance in the Republican-held Senate.

"Looking back on it, I think we were so prescient because after that, things got even worse with voter suppression," Boxer said. "We had hoped that our taking that stand would set the stage for legislation, but we could never get it done in the Republican Senate. We could just not get it out."