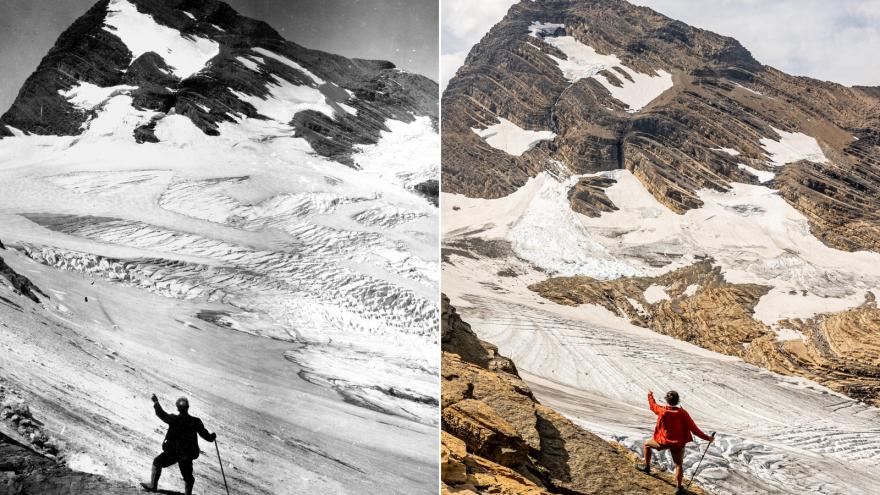 (CNN) -- Glacier National Park, one of America's original 10 national parks, could lose its glaciers completely within decades. What would the park look like in the next century then, without the glaciers that feed the wildlife, farms and people who depend on it?

Officials at the Montana park are asking the public about the its future on Twitter with the hashtag #GlacierMovingForward. Glacier National Park is over 100 years old now, but its terrain is rapidly changing -- and park officials want allies to support its future for the next 100 years.

When the park was founded in 1910, it had over 100 glaciers, mammoth masses of ice that covered about 25 acres and moved under their own weight. Now, "a couple dozen" are large enough to be considered glaciers, and all of them have suffered tremendous melt, according to the park.

Between 1966 and 2015, all of the 26 named glaciers in the park got smaller. Some lost as much as 80% of their area, but the average loss was 40%, Glacier National Park tweeted this week.

For years, the park predicted all of its glaciers would be gone by 2020. The National Park Service recently removed that expiration date due to the fickle nature of glaciers and the effects of climate change.

How the park has reacted to global warming

Rising global temperatures have disrupted the 1 million-acre national park. But if Glacier National Park continues to lose its eponymous features, its aesthetic won't be the only thing to suffer.

The park provides cold freshwater to people who live in the state and neighboring areas and the crops they farm -- but if global temperatures continue to climb and conditions get hotter and drier more often, the demand for water will, too. With fewer glaciers, that demand can't be met.

Glaciers' waters also generate electricity, according to the National Park Service, as it passes through hydroelectric dams. And the wildlife that depend on the glacier's cool climate to survive may find themselves without sources of food, at risk of becoming prey or in uninhabitable terrain.

It may be too late to save Glacier National Park's glaciers, the park concedes, because global temperatures have already climbed 1.5 degrees Fahrenheit (Northwest Montana, where the park is located, is warming at double that rate, according to the National Park Service).

"We do know the park in 2100 will be different than it was in 1900, and to some extent, we can work toward a future we want," the park wrote on Twitter.

To combat global warming -- and work toward preserving surviving glaciers in other parts of the world -- the park is powered by hydro- and solar power, has installed recycling programs and is encouraging visitors and employees to explore the terrain by foot or bike rather than by car.