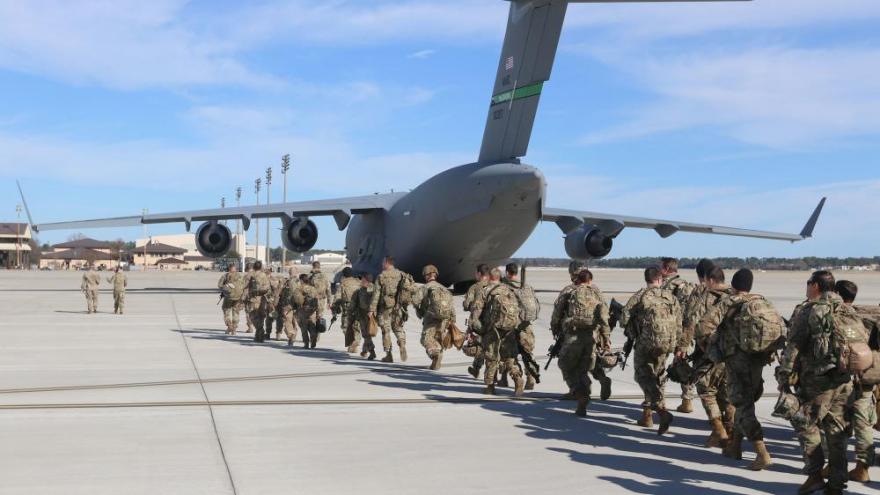 More than 3,000 service members are set to be deployed to the Middle East as tensions rise following the killing of an Iranian general by the United States.

(CNN) -- More than 3,000 service members are set to be deployed to the Middle East as tensions rise following the killing of an Iranian general by the United States.

That means thousands of families were separated from their loved ones -- some without notice. Many of them are from the Immediate Response Force of the 82nd Airborne Division in Fort Bragg, North Carolina.

The head of Iran's Revolutionary Guards' Quds Force, Qasem Soleimani, was killed Friday by a US airstrike ordered by President Donald Trump.

It's not clear what that means for the future of US military involvement in the region. But "the 82nd Airborne is America's guard of honor," said Lt. Col. Mike Burns, a spokesman for the division.

"We have traditionally held the responsibility of maintaining the Immediate Response Force, able to deploy anywhere in the world in 18 hours. And that's something we take pride in doing."

Yet even with that sense of pride, "the families may be experiencing some angst because the soldiers can't tell them exactly where they are ... naturally, that's tough," Burns said.

"But what we can reassure the families is the paratroopers are trained, they're fit, and they've got their battle buddies to their left and right to help them through the situation."

Here are the stories of some families dealing with sudden separation:

Melissa Morales, 18, said her twin sister, Cristina, was visiting back home in Victorville, California, when she was told Friday she would be deploying Wednesday.

"She kind of took it as a joke the night before because of the memes on Twitter," Morales said.

The hashtag #WWIII was one of the top trends on Twitter heading into the weekend.

While the memes are funny, she said, reality hit when her sister received the deployment notification.

"She wasn't expecting to be deployed so soon."

Morales said her sister joined the Army last summer and has been stationed at Fort Benning in Georgia. This will be her first deployment.

"As her twin sister, it kind of hurts. It stings," Morales said on her sister's deployment. "Yeah, I'm obviously sad, but she made me and the rest of family realize it's what she signed up for."

Morales tweeted photos of her sister on her personal account Friday.

"Pray for my sister and every other soldier that has deployed," she wrote.

Morales did not want to publicize her tweet on CNN. She said she tweeted it because of the #WWIII memes to show "there's real people risking their lives for this war."

Deployment right before a child's birth

He's worried about the deployment of a friend who's expecting a baby soon.

"The 82nd is trying to push back his deployment date as much as possible, but his wife is a high-risk pregnancy," Smith said.

"We believe he's leaving somewhere around Tuesday, and his wife is due Wednesday."

But Smith said the military community near Fayetteville is accustomed to taking care of one another.

"Fayetteville's unique in that situation. Neighbors take out for neighbors," Smith said. "And that's one of the things we learn here: love thy neighbor."

Spouses who are more experienced with last-minute deployments are reaching out to those who need help.

Sabrina Johannes is an Army wife whose husband served in Afghanistan. She's the executive director of Deployed Love, a group of volunteers at Fort Bragg that supports spouses and children left behind.

Johannes said spouses, especially those new to the deployment experience, have reached out saying they're scared.

"In the last few days we've definitely been hearing from some of the family members probably not even here at Fort Bragg," Johannes said.

"They're parents that are needing information and looking out to us."

Johannes said she's hoping to set up a social event in coming weeks to connect with anyone who needs support.

April Shumard was in San Diego with her daughter for a medical procedure when she learned her husband in North Carolina suddenly got called up, CNN affiliate WNCN-TV reported.

She didn't have time to say goodbye in person.

"To have your partner be gone and not be able to prepare for it, it's just really hard," she told WNCN. "I think the worst part of that is when you don't get to say goodbye."

She relied on friends in Fayetteville to care for her other children because her husband had to leave immediately.