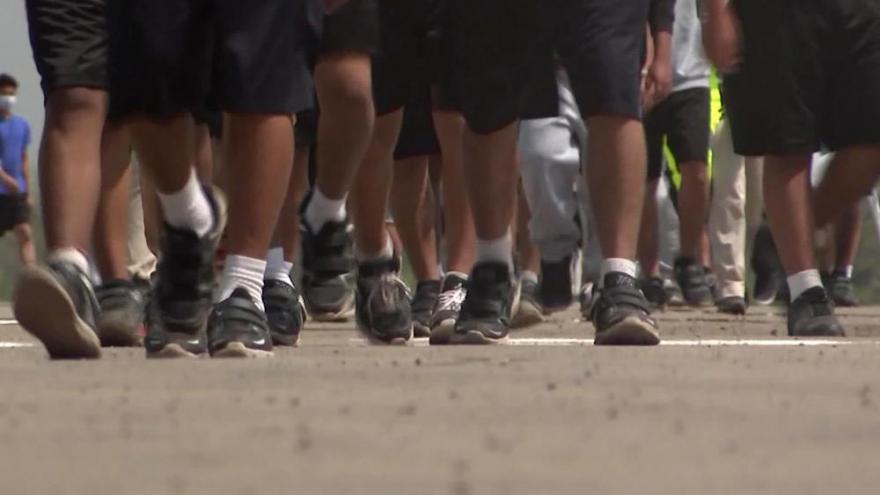 Some unaccompanied migrant children, waiting to be reunited with family in the United States, were stuck in parked buses -- at least one for more than three days -- with no access to showers or places to sleep, according to an immigrant advocate.

(CNN) -- Some unaccompanied migrant children, waiting to be reunited with family in the United States, were stuck in parked buses -- at least one for more than three days -- with no access to showers or places to sleep, according to an immigrant advocate.

Joel, a 15-year-old boy from Honduras, waited on buses from Saturday to Wednesday, according to Dr. Amy Cohen, a psychiatrist and executive director of Every Last One, a group that advocates for migrant children. CNN is using only his first name because of privacy concerns.

For more than three days, Joel was stuck on buses, waiting to be transported to family in Washington state, Cohen -- who's spoken with Joel and his family -- told CNN. "They brought them snacks, he said. They brought him no real food," Cohen said. "They were never permitted to go outside to stretch their legs or anything like that."

"It was absolutely horrible. I asked him, what was the feeling in the bus? And he said, everybody was desperate," Cohen added.

"This is completely unacceptable," Health and Human Services Secretary Xavier Becerra said in a statement to CNN. "We're quickly investigating this to get to the bottom of what happened and we'll work to make sure this never happens again. The safety and well-being of the children is our priority. "

Asked about the incident, which was first reported by NBC News, White House press secretary Jen Psaki said, "First, let me say that the reports of children, that you've referenced, being held in buses outside of the HHS facility in Dallas for extended periods of time are outrageous."

"They're unacceptable and they do not meet our standard for child care. That is true for the President. It is true for the secretary for health and human services. It is true for everyone across the government. It is being fully investigated, how we got to this point, how this possibly happened. There's no excuse for this kind of treatment," she added.

The Biden administration has previously come under scrutiny for its handling of the influx of minors at the border. In recent weeks, officials scrambled to quickly transfer unaccompanied migrant children out of jail-like Border Patrol facilities to the custody of the Health and Human Services Department. While the number of kids in Border Patrol custody has plummeted, more than 20,000 remain in HHS custody.

Joel reunited with his uncle and mother in Washington state Thursday. But the incident, Cohen said, is indicative of the seemingly disorganized effort to reunite some children with their families. She recalled instances of parents receiving calls abruptly alerting them that their child was arriving at a location -- at times, hours away.