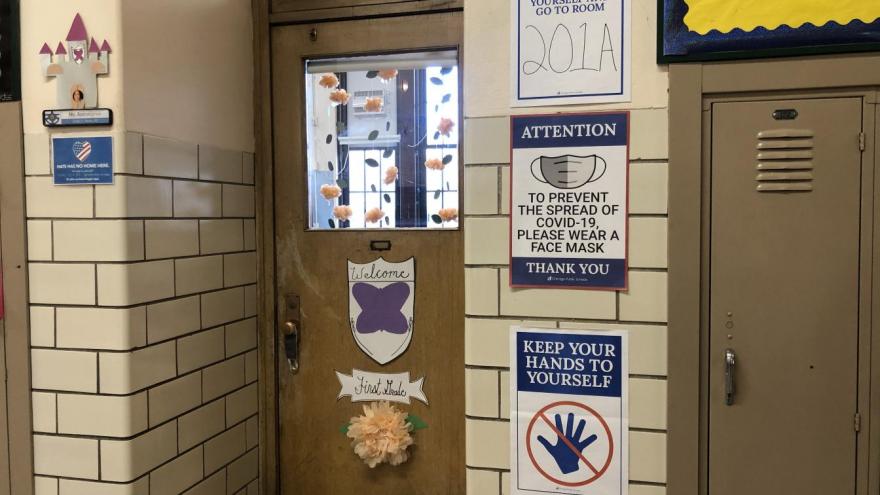 New signs encouraging practices to prevent the spread of Covid-19 are posted next to a "Welcome" decoration for first-graders at Hawthorne Scholastic Academy in Chicago.

(CNN) -- Leigh Oquendo welcomed her kindergarteners on Monday as they filed into her Hawthorne Scholastic Academy classroom in Chicago, as any teacher would.

What made this day special was that, for many of the children, it was the first time they had seen a teacher or fellow students in-person since the pandemic closed schools last March

They returned to a classroom where desks are spaced apart -- a precaution put in place to help prevent the possible spread of Covid-19 -- and where everyone, including Oquendo, is required to wear a mask. But, after months of distance learning, they all appeared happy to be there together.

"It was really important for me to get back in the classroom (and) see my students, especially this age," Oquendo told CNN. "Five and six year olds need to be in school."

This week marked a milestone for students and teachers, including Oquendo, in the Chicago Public Schools. The nation's third largest school district welcomed back thousands of kindergarten through 5th grade students on Monday, and middle schoolers may return next week. High schools are staying remote for the time-being.

Only 30% of the district's total 122,000 K-5 learners are being sent to in-person school by their parents, and it remains a hybrid experience -- with students in the classroom for two, three or four days a week and online for the remainder.

School district officials are confident more parents will opt-in at the next opportunity.

Just to get to this point took a month longer than Chicago schools officials anticipated, after a weeks-long standoff with the city's teachers' union over Covid protocols.

Dr. Janice Jackson, CEO of Chicago Public Schools, was the first to admit it hasn't been an easy journey.

"Everybody wanted the same thing," she told CNN. "Our teachers, principals, parents -- they want their kids in school, they want them to get a great education, but they want it to be safe."

The principal at Hawthorne Scholastic Academy said it took "months and months of hard work on logistics" to get the school prepared to open safely.

Teachers in Chicago, like others across the country, wanted vaccines to be available before they returned to the classroom. Educators in the city, as in other jurisdictions, have now been moved up the priority list for shots.

At least 1,800 doses have been administered across four Chicago Public Schools vaccination sites with thousands more appointments to come, according to data from the school district.

Oquendo, who has her vaccination appointment coming up, said she started working with her students even before they came back to get them acquainted with new protocols in place -- including how to follow one-way signs in hallways, keep their distance from others and wear their masks.

"We were graphing our times of building mask stamina so we've been wearing them even though we were on the computers," Oquendo said.

Davlantes said the school encourages such behavior to help limit the possible spread of disease. It also has health checks before anyone goes into the building -- and the school has plans in place for if a student arrives with Covid-19 symptoms or becomes ill during the day.

'One step in a long journey'

Jackson, of Chicago Public Schools, said everything was being done to get people -- teachers, staff, parents and students -- comfortable with returning to school.

"This is one step in a long journey," Jackson said. "We can't go from where we are today to where we were a year ago, it's going to be a process."

Jackson knows of President Joe Biden's target of reopening most K-8 schools five days a week within his first 100 days. But she called that "a very aspirational goal."

In the meantime, Chicago schools are operating as normally as possible.

"I can read the pictures, read the words, retell the story," one kindergartner said while in Oquendo's class.

"Wow! You remembered all that?" replied Oquendo, her smile clear, even beneath her mask.

Oquendo was once a student at Hawthorne, and her mother teaches there too. She's not looking to return to the past -- but said she's ready to move forward in a new way, after a year of virtual teaching.

"There are some things I discovered and learned from curriculum and ways of teaching and being creative that I'm going to continue to implement even though we're here in person."