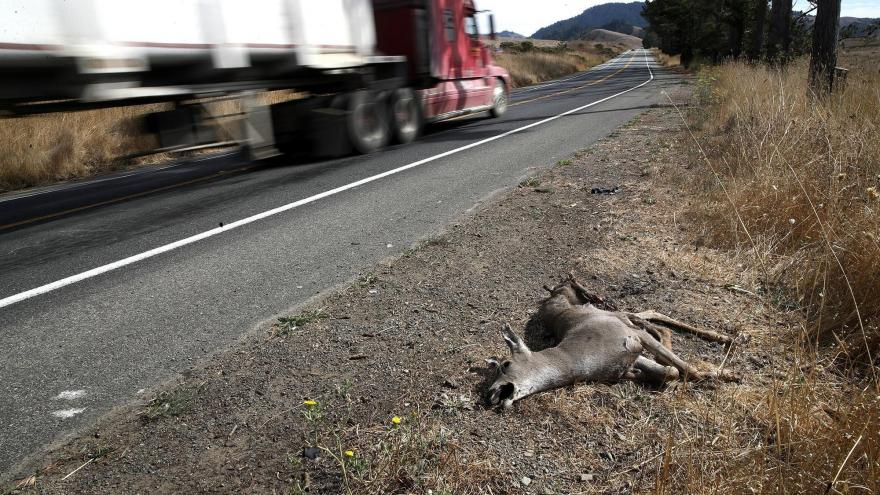 (CNN) -- California is the latest state to allow people to take home and eat animals they accidentally hit on the road, including deer, elk, pronghorn antelopes and wild pigs.

Senate Bill 395 was among a handful of other bills Gov. Gavin Newsom signed into law last week.

The bill, brought forth by Sen. Bob Archuleta, authorizes the state's Fish and Game Commission to develop a pilot program which, through the help of an online portal, would issue free permits to anyone who wants to take the animal they killed on the road home to eat.

To get permits, residents would have to record in the portal "the location, type, and description of the animal salvaged, the date and time of salvage, the basic characteristics of the incident and a description of the vehicle involved... and the destination where the carcass will be transported," the legislation says.

More than 20,000 deer are hit on California roadways each year, the bill says.

"This potentially translates into hundreds of thousands of pounds of healthy meat that could be used to feed those in need."

The program will not start immediately

The commission can only start creating the pilot program -- which would cover limited areas of the state -- once it receives funding from the legislature.

The legislation merely gives the commission authority to create the program, and once created, it would cover a maximum of three areas identified as having a high number of vehicle-animal collisions.

The commission will have until January 1, 2022 to create the program, if it receives funds.

Archuleta says the law would help the California Department of Transportation and the Department of Fish and Wildlife "identify where roadway defenses can be enhanced and where future wildlife highway over-crossings should be located."

Once this experimental program concludes, the bill says, officials will report to the commission the number of collisions during a certain time period, barriers to their collection of data and whether it's possible to make the system state-wide, as well as the estimated costs.

The information, it says, could help find ways to prevent collisions.

This is not a new idea

Roadkill salvage legislation has been passed in more than 20 states across the country, including Florida, Washington state, North Carolina and Pennsylvania.

Most states, like California's rules, provide provisions on which animals may be taken for personal use and clarify whether a permit is required.

Montana's law, for example, allows free salvage permits to be issued only for deer, elk, moose and antelope that were killed by cars.

Michigan, which adopted its roadkill legislation in 2014, listed feedback received on the bill, including exposing residents to potential health risks.

"Drivers and law enforcement officers may not be able to make a determination of whether meat from game killed in a motor vehicle accident is safe for people to handle or eat," a memorandum says. "Furthermore, fresh meat must be properly dressed and stored relatively quickly in order to avoid the growth of potential pathogens."

Legislators also warned that poachers may use the new law to unlawfully kill wild animals.

The pros and cons?

Some animal rights activists seem to love the idea.

PETA says eating roadkill is a "superior option to the neatly shrink-wrapped plastic packages of meat in the supermarket."

Eating roadkill, the organization says, is much healthier than packaged meat as those animals most likely haven't consumed antibiotics, hormones and growth stimulants.

It's also more humane, PETA said, as the animals who were killed on roads did not have to endure things like getting "castrated, dehorned, or debeaked without anesthesia" and other traumatizing conditions.

"Perhaps the animals never knew what hit them," the organization said.

But other groups have raised concerns.

The new legislation may prompt elk and antelope hunters who struggle getting a tag in the state to now kill the animals and report it as roadkill, the California Fish and Game Wardens' Association has previously said, according to CNN affiliate KOVR.

Another concern the association raised was the safety of drivers who would stop on roadways and exit their vehicles in order to collect the animals.