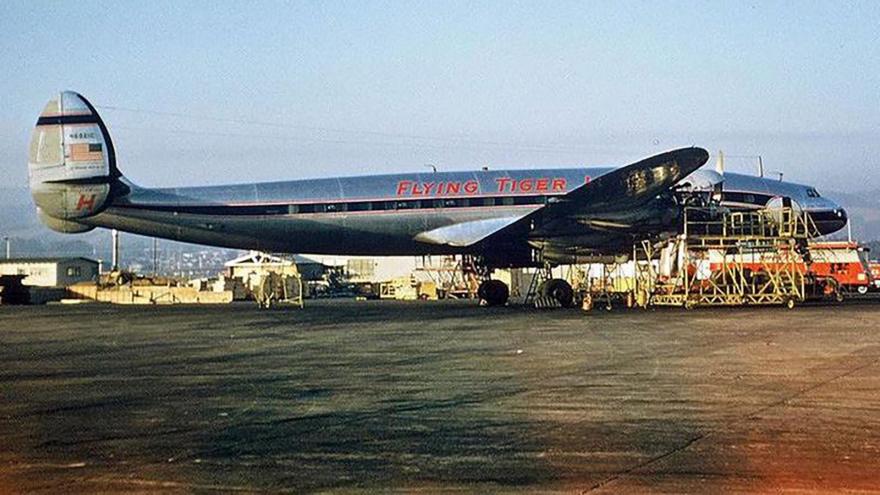 A memorial will be unveiled in Columbia Falls, Maine, on May 15 to honor those who were on Flight 739. Flying Tiger Line Flight 739 was a Lockheed Super Constellation aircraft, which is pictured here.

(CNN) -- The families of soldiers lost while taking part in a secret US mission during the Vietnam War have long wanted their relatives' names included on the Vietnam Veterans Memorial in Washington.

Because of complexities surrounding Flying Tiger Line Flight 739 -- which disappeared over the Pacific Ocean in 1962 -- that hasn't happened.

But relatives of the missing military members say they are at last about to receive some recognition. A memorial will be unveiled in Columbia Falls, Maine, on May 15 to honor those who were on Flight 739.

There are many unanswered questions about what happened to the plane.

It disappeared March 16, 1962, as it headed to the Philippines from Guam. Both locations were scheduled refueling stops on the flight from California to Saigon.

An explosion was reported near where Flight 739 should have been at the time, according to a crash report obtained by Stars and Stripes. No debris from the aircraft was found, the report said.

There were 93 US soldiers on board, 11 crew members, and three South Vietnamese soldiers. The details of their mission have not been publicly revealed. The Flying Tiger Line was the first all-cargo airline in the US, according to Flying Tigers Club. It also chartered flights for military personnel.

Jennifer Kirk, niece of Spc. Donald Sargent, who was on the flight, has been in contact with several family members of others who were on the mission. She told CNN that many of them said the men who were about to leave believed they might not be coming home.

"Then he'd go downstairs to go to the vehicle that was picking him up and he'd come back upstairs. 'I just need one more hug.' So he knew something, but he didn't say."

No names on the wall

The Department of Defense has said those on Flying Tiger Line Flight 739 couldn't have their names on the Vietnam Veterans Memorial because they weren't in a combat zone when they went missing, Kirk said.

Donna Ellis was 5 when she lost her father, Staff Sgt. Melvin Lewis Hatt. She said she doesn't remember much from that period, but she has been fighting to get her father's name on the memorial in Washington. She said because those on Flight 739 are not on that wall, they are not recognized on their state or local Vietnam memorials.

In Ellis' push to get those names included, she wrote to Sen. Gary Peters, of her home state of Michigan. Peters introduced a bill in 2019 to get the names of the soldiers from Flight 739 on the Vietnam Veterans Memorial. It was read twice in the Senate, but died after being referred to the Committee on Energy and Natural Resources.

'Some kind of closure'

Kirk and Ellis said they will keep fighting to get their family members' names on the memorial wall, but they are looking forward to getting some closure when the Wreaths Across America monument is unveiled.

Morrill Worcester, founder of Wreaths Across America, decided to build the monument on his land after talking with Kirk's family about their loss. Kirk said her family was shocked when they heard someone was finally going to do something.

"He put his whole heart into it," Kirk said.

Wreaths Across America Executive Director Karen Worcester told CNN the Kirks' story hit home with her and her husband.

"They've just been trying to get answers and some kind of closure just to know that these people weren't forgotten," she said.

Wreaths Across America held a groundbreaking ceremony in July for the monument, which is located where brush is harvested every year to make veterans' remembrance wreaths to be placed on military headstones.

The monument will have the names of everyone on Flight 739 and their names will be read at the unveiling, Worcester said.

"We have a saying at Wreaths Across America that a person dies twice," she said. The first is when "life leaves their body, but the final time is when their name is spoken for the very last time."

In addition to the unveiling, families will be invited to take part in the Wreaths Across America Remembrance Tree Program, which includes hanging a replica dog tag on the trees used to make remembrance wreaths.