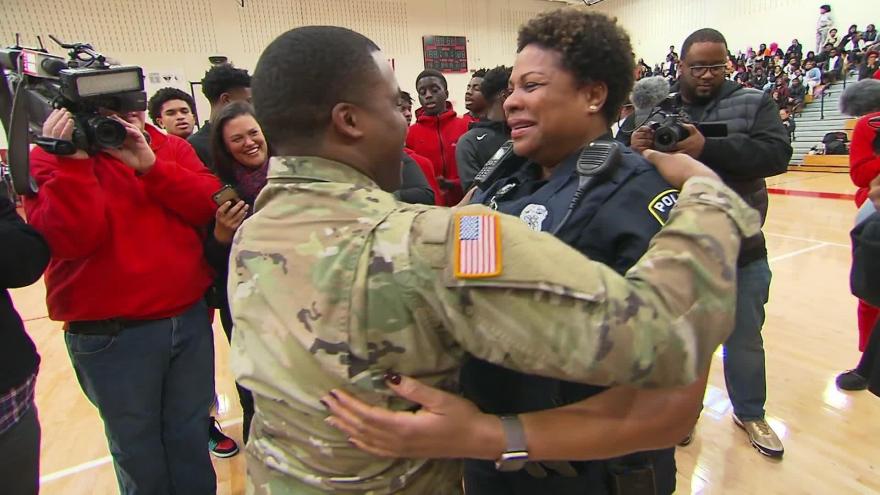 As an Atlanta high school school resource officer was being honored during a pep rally, her son appeared via video from South Korea, where he's been deployed for two years and was set to return home in one week.

(CNN) -- As an Atlanta high school school resource officer was being honored during a pep rally, her son appeared via video from South Korea, where he was stationed and was set to return home in one week.

"I'm proud of you," US Army Spc. Shakir Aquill said to his mother, L.J. Williamson. "We've got one more week."

Instead, it was only one more minute.

The pep rally was for the D.M. Therrell High School basketball team, the defending Georgia AA champions and currently ranked No. 1 in the state. As the team and cheerleaders charged into the gym, Aquill emerged from behind them, dressed in his Army fatigues.

Williamson, on duty in her police uniform, ran toward her son, arms held wide and embraced him as the gym exploded in cheers. She hadn't seen him in two years.

"It was unreal. I just I couldn't believe it. I saw the basketball team come in and, you know, I figured it was just the boys, the usual boys who I use to take the place of him in his absence. And then I saw his uniform and I lost it," Williamson said.

Aquill considers his mom a best friend and wanted surprise her, so he asked his aunt a month and a half ago to help put together this surprise for his "momma bear."

"It's surreal. It's definitely a surprise. I didn't expect it. I was looking forward to him being home next week," Williamson said.

She wasn't the only one surprised. Earlier in the day, Aquill surprised his little brother Justin, a seventh grader at Wesley International Academy Charter School.

"We were in the middle of dissecting rats and I didn't know, I thought it was the preservatives they were using that was getting to my brain," Justin said. "I had looked at my auntie and I waved at her and then I looked at my brother and I was like 'Oh Shakir, when did you get here?'"

Aquill will be at home for 21 days before he returns to duty at Fort Lewis near Seattle.