Solar Orbiter swings by the sun to unravel its mysteries 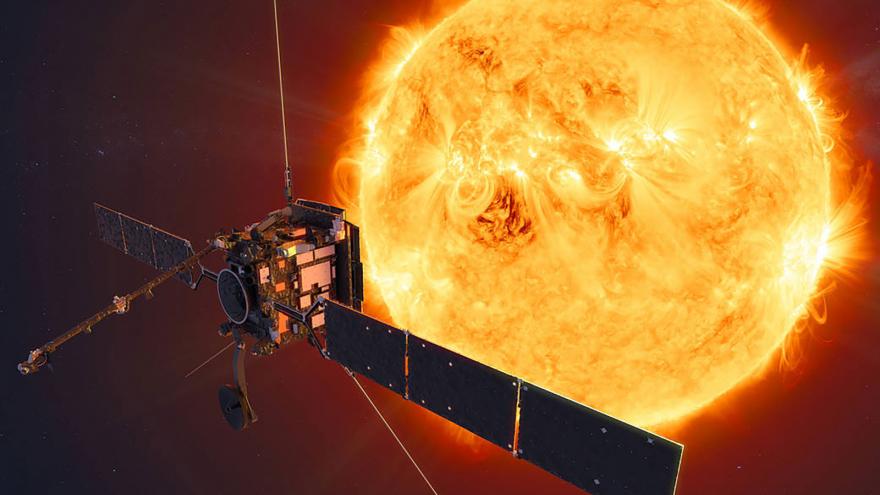 (CNN) -- The Solar Orbiter mission will make its closest flyby of the sun Saturday since launching in February 2020.

The spacecraft will come within 31 million miles (50 million kilometers) of the sun, less than one-third the distance between the star and Earth. This will take Solar Orbiter inside the orbit of Mercury, the closest planet to the sun.

The European Space Agency, which jointly manages the mission with NASA, will share the first images and data within a few weeks because it will take time to download and analyze everything gathered during the flyby, according to ESA.

You can track Solar Orbiter's progress using a tool developed by ESA to follow the sun explorer's journey.

Solar Orbiter's 10 instruments will be running simultaneously, ready to measure the solar wind and keep an eye out for mini flares, called campfires, that researchers spied in the mission's first images in 2020. The spacecraft also carries high-resolution telescopes.

The data collected during the flyby could help scientists unlock some of the biggest remaining solar mysteries, including why and how the temperature rises through the sun's atmosphere.

Solar Orbiter will also capture high-resolution images of the sun and record the solar wind, an energized flow of particles that stream away from the sun.

"From this point onwards, we are 'entering the unknown' as far as Solar Orbiter's observations of the Sun are concerned," said Daniel Müller, Solar Orbiter project scientist, in a statement.

The latest images shared by Solar Orbiter provide a new perspective of the sun that captures unprecedented detail, including the highest-resolution image ever taken of the sun's outer atmosphere. The images were taken on March 7 as the spacecraft crossed directly between Earth and the sun.

The spacecraft was halfway between the two celestial bodies, at a distance of about 46 million miles (74 million kilometers) from the sun.

One shot, taken using the Spectral Imaging of the Coronal Environment instrument, called SPICE, is the first full sun image of its kind in 50 years, showcased in ultraviolet light.

Different wavelengths of light can help researchers study temperature differences between the solar surface and the sun's corona, or outer atmosphere.

This is just one of Solar Orbiter's first close passes of the sun, with many more flybys planned to bring it closer and closer to the star in the coming years. Gradually, the spacecraft will raise its orientation to study the sun's never-before-seen polar regions.

Solar Orbiter comes equipped with a multilayer heatshield, a special coating called "Solar Black" made using burnt bone, sliding doors that protect its instruments, solar arrays that can tilt away from the worst of the heat and cooling elements inside the spacecraft. Together, these keep the spacecraft from melting as it studies the sun.

The sun is getting more active, and Solar Orbiter has been watching its solar temper tantrums.

A large solar flare exploded from the sun on March 2. The eruption was rated as M-class, the fourth strongest type of the five categories measuring solar flare intensity. A burst of this strength can cause brief radio blackouts at Earth's poles and minor radiation storms that might endanger astronauts on the International Space Station, according to NASA.

The Extreme Ultraviolet Imager on the Solar Orbiter captured a video of the dramatic event.

Meanwhile, the Parker Solar Probe, which became the first spacecraft to "touch the sun" at the end of 2021, recently experienced the extremes of a large solar prominence when the sun released tons of charged particles in Parker's direction on February 15.

If solar flares and storms -- like the impressive flare on February 15 (also captured by Solar Orbiter) or the solar storm that impacted SpaceX's Starlink satellites in February -- seem to be occurring more frequently, it's because the sun is ramping up activity as it heads toward solar maximum.

It's important to understand the solar cycle because space weather caused by the sun -- eruptions like solar flares and coronal mass ejection events -- can impact the power grid, satellites, GPS, airlines, rockets and astronauts in space.

Every 11 years, the sun completes a solar cycle of calm and stormy activity and begins a new one. The current solar cycle, Solar Cycle 25, officially began in December 2019 and the next solar maximum, when the sun is experiencing peak activity, is predicted to occur in July 2025.

Over the course of a solar cycle, the sun transitions from a calm period to one that is very intense and active. This activity is tracked by counting sunspots and how many are visible over time. Sunspots, or dark spots on the sun, are the origin point for the explosive flares and ejection events that release light, solar material and energy into space.

This puts Solar Orbiter and Parker Solar Probe in perfect position to watch as we head toward solar maximum.