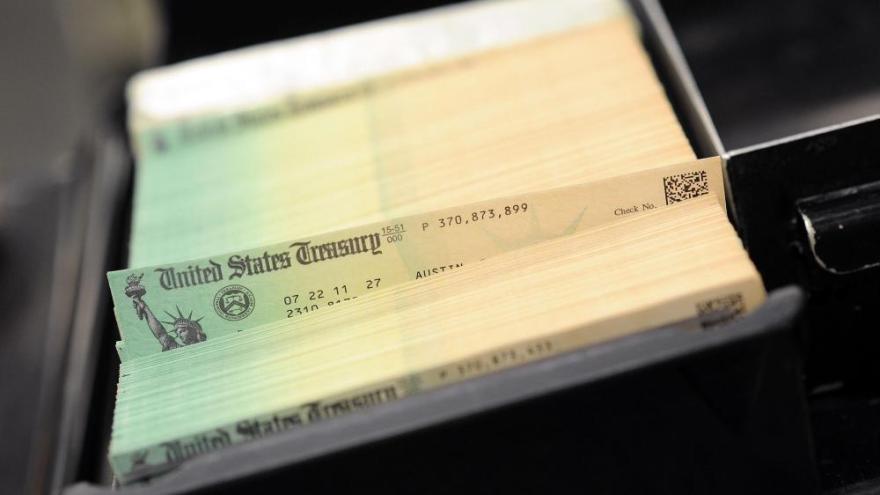 Social Security recipients could see a 10.5% increase in their payments next year, driven by the steep rise in inflation, according to a new estimate and pictured, U.S. Treasury checks on July 18, 2011 in Philadelphia, Pennsylvania.

(CNN) -- Social Security recipients could see a 10.5% increase in their payments next year, driven by the steep rise in inflation, according to a new estimate.

That would add about $175 to the average monthly retiree benefit, which is currently $1,668, according to The Senior Citizens League, an advocacy group that released the projection Wednesday. But it still may not be enough to cover seniors' costs if price hikes aren't tamed in coming months.

The estimate is based on the June reading for an inflation measure the Social Security Administration uses to calculate the annual cost of living adjustment, or COLA. It rose by 9.8% over the past 12 months, compared with the 9.1% annual jump for the broader and better known Consumer Price Index for All Urban Consumers.

Just how much more retirees, Americans with disabilities and other recipients will actually receive won't be determined until the fall. The official adjustment, which the agency releases in October, is based on average inflation during the third quarter as measured by the Consumer Price Index for Urban Wage Earners and Clerical Workers, known as CPI-W.

If inflation increases in the coming three months, the 2023 adjustment could be 11.4%, the league said. If price hikes moderate, the benefit bump could be 9.8%.

In May, the league estimated the adjustment would increase 8.6%, based on inflation at that point.

A separate estimate from the Committee for a Responsible Federal Budget, a watchdog group, found that if the current inflation trend continues, the adjustment would be 11.4%. If inflation remains at the June level, the increase would be 9%.

Whatever it is, the adjustment will likely be the largest since the early 1980s, the last time seniors received a double-digit boost.

Social Security recipients received a 5.9% adjustment for 2022. But inflation has outpaced that, leaving many seniors struggling to pay their bills, said Mary Johnson, policy analyst at the league.

"Inflation has been so high and so much higher than the 5.9% COLA that people got, they have experienced a shortfall in their benefits," Johnson said. "If people do not have adequate retirement savings or cash savings that they can easily get to, people are putting more on consumer credit cards."

Half of seniors said they had to spend emergency savings over the past year, according to a survey the league conducted between January and March. That compares with 36% in a survey done last year.

Nearly half said they had visited a food pantry or applied for food stamps, more than double the share in the 2021 survey. And more applied for assistance with medical and prescription drug costs, as well as utility bills and rent.

Social Security benefits have lost 40% of their buying power since 2000 because of high inflation, according to a separate study from the league. The entitlement's purchasing power dropped 10 percentage points between March 2021 and this past March, the largest since the study began in 2010. The loss is even greater now since inflation has continued to rise this year, Johnson said.

Seniors, however, should get a break when it comes to their Medicare premiums. They had to contend with a 14.5% increase in Part B premiums for 2022, which raised the monthly payments for those in the lowest income bracket to $170.10, up from $148.50 last year. A key driver of the increase was a projected jump in spending due to a costly new drug for Alzheimer's disease, Aduhelm.

However, since then, Aduhelm's manufacturer has cut the price, and the Centers for Medicare and Medicaid Services limited coverage of the drug. The agency said it will factor the lower-than-forecast spending into the 2023 premium.

It expects the 2023 premium to be lower than this year's premium, though the final determination will be made in the fall.

While many older Americans could use the extra money, a large adjustment could actually hurt low-income seniors. That's because it could push them above the income limits to qualify for government aid, such as food stamps, or require them to start paying taxes on the benefits.

Some 39% of seniors who receive assistance said their benefits were reduced because of the hefty adjustment for 2022, while 15% said they lost access to at least one program, according to a survey by the league.

In their annual report, the program's trustees assumed inflation would be 4.5% in 2022 and 2.3% in 2023 -- though the actual figures will likely be well above that, Charles Blahous, senior research strategist at George Mason University's Mercatus Center and former public trustee for Social Security and Medicare, said at a recent Committee for a Responsible Federal Budget forum.

However, the Social Security trust fund is also expected to benefit from higher payroll tax revenue due to wage hikes and from more income tax revenue from larger benefits paid to recipients.

Social Security won't be able to pay full benefits by 2035 if Congress doesn't act, according to the latest trustees report.