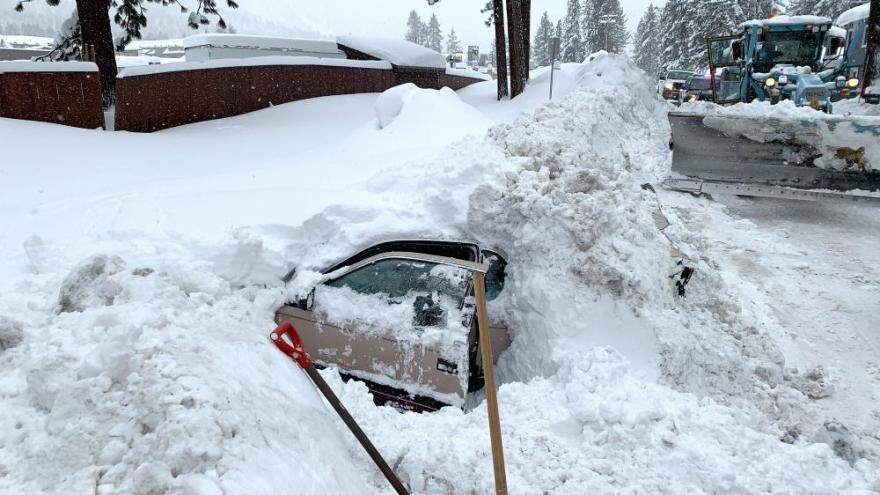 The woman said she was buried in the car for four to five hours. Full credit: Courtesy of the City of South Lake Tahoe

(CNN) -- It was just an ordinary day for a snowplow driver in California until he struck a car buried in snow -- then his day turned into a rescue mission.

On February 17, the driver was clearing the snow-covered roads of South Lake Tahoe when he struck the back of a car that was illegally parked on the street. The driver contacted police to start the process of getting the vehicle towed out of the way, but as police and the driver started to dig out the car, to their surprise, a woman stuck her hand out of the car window waving for help.

She said she had been there four to five hours, but the amount of snow covering her car led officials to believe she possibly was there longer.

"Being inside of a buried car, or starting a car buried in snow, could have deadly consequences," said Chris Fiore, communications manager for the City of South Lake Tahoe. "If we had not gotten to her, I'm afraid this story would have a very different ending."

It took some time to dig her out, but the 48-year-old woman was able to walk away from the scene uninjured.

City officials released news of the incident on Tuesday to warn residents about parking illegally, especially while the area braces for another winter storm.

"One of the biggest issues we've had this winter is illegally parked cars," said Ray Jarvis, public works director, in a statement. "They don't just delay the snow removal process; they're dangerous for everyone involved."