Snow, ice, flooding and severe storms will ring in 2022 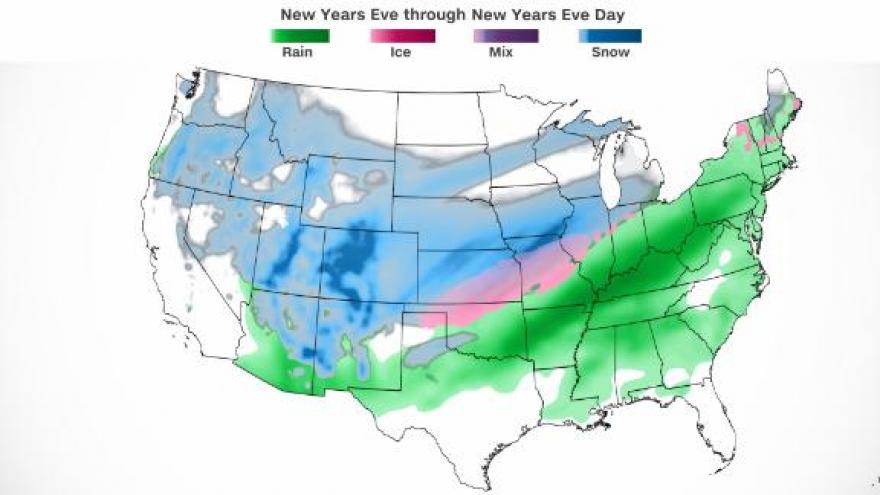 (CNN) -- The year 2022 will start with a bang, as snow, ice, severe storms, flooding and plummeting temperatures impact millions from coast to coast.

"This is a classic winter storm set-up with rain and thunderstorms across the South, a line of ice near the storm's track and an area of heavy snow in the colder air to the north of the low pressure," said CNN meteorologist Chad Myers. "Travel will become difficult on Saturday afternoon from Chicago all the way to Oklahoma and Nebraska due to the combination of the snow, ice and wind."

First significant snow of the season

In the Rockies, snow will begin to fall Saturday in the areas that were so devastated by raging wildfires on Thursday night.

Winds have died down from 110+ mph gusts, to less than 30 mph, and the snowfall will also help suppress the fire.

Sixty-seven percent of Colorado is in severe or extreme drought.

Denver has received just over an inch of rainfall in the last six months -- the driest ever for the second half of the year. So despite the fact the snow will make travel treacherous for the holiday weekend, it will largely be welcomed across the state.

Four to eight inches of snow is likely to fall across the lower elevations, and several feet of snow are expected in the mountains.

The higher amounts will largely depend on where the heavier snow bands set up.

"Bands of heavier snow, could develop as well and last into the evening hours, but it's difficult to forecast exact areas at this time," said the National Weather Service (NWS) office in Boulder, Colorado.

The snow exits the Rockies and heads to the Plains and Midwest, where we could see four to eight inches of snowfall for portions of Kansas, Nebraska and Iowa through Saturday.

Chicago could see up to four inches of snow, while some areas near the Missouri/Iowa border could pick up a foot of snow though Saturday.

Along with heavy snow, gusty winds blowing at 20 to 30 mph will make visibility very low. Blowing snow will make travel even more difficult.

Just south of the heaviest snow, ice will setup a slippery situation overnight from eastern Kansas to northern Missouri and even into Indiana, possibly impacting some of the southwest suburbs of Chicago.

This will make travel nearly impossible for the many people out for New Year's Eve celebrations. Roads could be clear early this evening, then quickly turn icy after midnight.

Most locations should see ice accumulation of less than a quarter inch, but that is still in dangerous territory.

Severe storms, including tornadoes, at the new year

Mother Nature plans to add some fireworks of her own this New Year.

Severe storms begin this evening where the slight risk of severe weather for portions of Texas, Arkansas and Tennessee.

Places like Little Rock, Nashville and Memphis are under a level 2 out of 5 severe risk. However, even places as far west as Dallas could see severe storms.

The threat increases on Saturday to a level 3 out of 5, and shifts slightly east.

"Widespread thunderstorms are expected from the ArkLaTex to the Western Appalachians on New Year's Day," said the Storm Prediction Center (SPC). "All severe-weather hazards are possible including large hail, damaging winds, and tornadoes, a couple of which may be strong."

Memphis and Nashville could once again see severe storms, this round could be even stronger.

"Cannot argue with the enhanced risk for the entire mid state," said the NWS office in Nashville. "Straight line winds and some tornadic activity cannot be ruled out."

Even Atlanta and Birmingham could see strong storms as this strong cold front advances east.

Flooding will also be a concern as these storms unfold over relatively the same areas for several days.

We would potentially see storms training over one another, resulting in flash flooding across the Tennessee Valley.

According to the Weather Prediction Center (WPC), "Some locations in northeast Tennessee received 150-200% of normal rainfall over the last 7 days, making them susceptible to potential flash flooding."

Chance for the heaviest rain, with the highest threat of flooding, looks to be on Saturday, for areas across the Ohio Valley, including Kentucky and extending as far south as Arkansas.

These areas could see up to four inches of rain, and some isolated locations could easily see much more.

With soils incredibly moist and given the duration of the rainfall, there is growing confidence that a significant flood event could occur.

"This supports the concern for rapid runoff within the Moderate and Slight Risk areas," said the WPC.

Coldest temperatures of the season

Dramatically colder temperatures will be ushered in behind the storms and heavy rainfall, making for a blustery and cold start to 2022.

Nearly 10 million people are under wind chill warnings and advisories across the northern Plains and Upper Midwest where it will feel like -25 to -55 degrees Saturday morning.

Much of the Plains will fall to the single digits tonight, stay in the 30s for Saturday, then rebound back in to the 40s by Sunday.

Many areas in the South that have been experiencing temperatures 30 degrees above normal this last week of the year, will plummet to below normal temperatures very quickly.

Temperatures will drop some 40 to 60 degrees in about 48 hours for much for the southern Plains and South.

Dallas will possibly have a high in the 70s on Saturday, which will then quickly plummet into the single digits, if wind chill is factored in.