Sneakers designed in honor of Obama to go on sale for $25,000 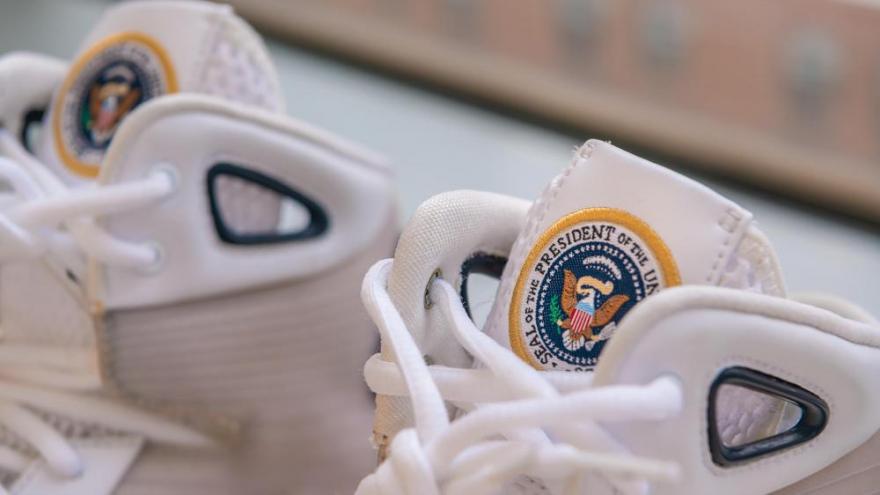 The pricey white sneaks feature a dark blue signature Nike "swoosh" with dark blue detailing and the presidential logo on the tongue flap.

(CNN) -- They're not the Air Obamas, but one sneakerhead with a lot of cash will have an opportunity this week to purchase an exclusive pair of basketball kicks made in honor of the 44th President.

The unique pair of Nike Hyperdunks will be sold on the website of Sotheby's auction house Friday at 4:44 p.m. ET, a nod to Barack Obama's status as the 44th President, for $25,000.

The pricey white sneaks feature a dark blue signature Nike "swoosh" with dark blue detailing and the presidential logo on the tongue flap. The numbers "44" in blue and red stitching are also embroidered on the inner side of each shoe. Graphics including bald eagles and "1776" are engrained on the insoles.

Sotheby's says on a listing for the shoes that the "deadstock Nike Hyperdunks are considered one of only two pairs in existence" with the other made for Obama in 2009. The pair "was not owned, or worn" by the former commander in chief, the site says.

The Hyperdunks also resemble the "United We Rise" collection of USA Olympic sneakers worn by Team USA at the 2008 Beijing Summer Olympics, according to Sotheby's. Nike partnered with late NBA star Kobe Bryant to launch the shoe in April 2008, and the auction house says the shoes have a production date coding of "20091022" for October 22, 2009.

Sotheby's wouldn't reveal on Tuesday who provided the shoes to the auction house, but when asked how the pair were authenticated, Brahm Wachter, the director of eCommerce development for Sotheby's, said the company is confident they were produced by Nike.

"Through our research, due diligence and consultation with the consignor, we have every confidence that the sneakers are an authentic confirmation sample produced by Nike," Wachter said Tuesday.

A spokesperson for Obama declined to comment to CNN about the shoes. CNN has reached out to Nike for comment.

Although Obama, a basketball enthusiast since youth, is no longer in office, he has remained an influential fixture on social justice reform among athletes and the Hyperdunks aren't the first shoe designed with the former President in mind.

NBA star Steph Curry, who has partnered with Obama's My Brother's Keeper Alliance, which aims to mentor boys and young men of color, sported his custom Curry 4 sneaks bearing the Obama "O" logo during a Golden State Warriors game in 2018. They were later auctioned off.