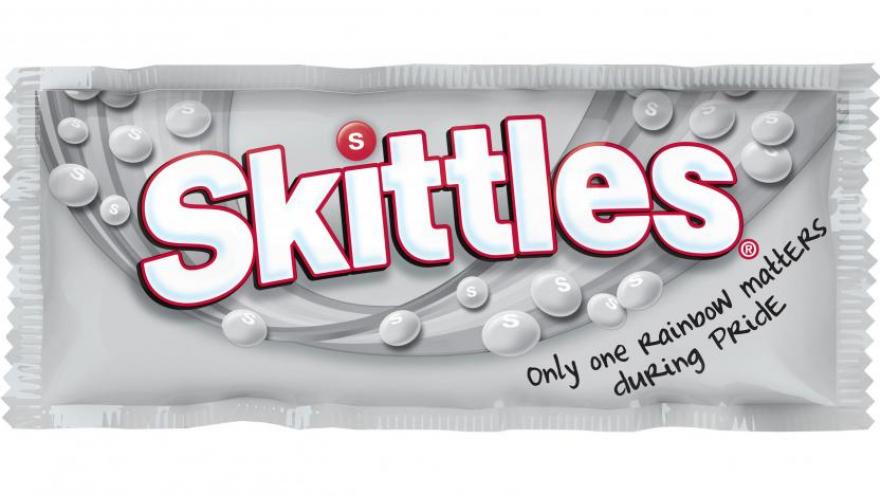 Colorless Skittles will hit the shelves for the month of June in celebration of Pride Month.

(CNN) -- The candy that's known for its iconic rainbow is ditching their colorful symbol for Pride Month to celebrate and support the LGBTQ+ community.

Skittles are going colorless with both their packaging and their product for all of June, saying "only #OneRainbow matters."

Gray limited-edition "Pride Pack" candy bags will hit the shelves of CVS and select Walmart stores next week until the end of June.

What about the flavors? Not to fear. Even though you won't be able to see the rainbow colored candies, you'll still get to taste the rainbow with the same original fruity Skittles flavors.

This isn't the first time the gray candies are being sold in stores. The brand released these packs in Canada, Germany, and the United Kingdom in previous years.

For the US launch, the brand partnered with LGBTQ+ advocacy group GLAAD, and for every pack of gray skittles sold $1 will be donated to the group up to $100,000.

This isn't the first time a brand has partnered with GLAAD in this way. Last year, Bud Light sold rainbow-colored aluminum bottles in bars nationwide and donated $1 from each case sold.

"This Pride month, Skittles is removing its rainbow, but replacing it with much-needed conversations about the LGBTQ+ community and a visible stand of solidarity," GLAAD President and CEO Sarah Kate Ellis said in a release.

This June marks 51 years since the Stonewall uprising in June 1969 in New York City, which helped spark the modern gay rights movement. Most Pride events take place each year in June, although some cities hold their celebrations at other times of the year. During the month, the world's LGBTQ+ communities come together and celebrate the freedom to be themselves.

"While Pride month certainly looks different this year, Skittles is passionate about showing its support for the LGBTQ+ community," Hank Izzo, vice president of marketing, Mars Wrigley US, said in a release. "We believe that giving up our rainbow means so much more than just removing the colors from our Skittles packs and we're excited to do our part in making a difference for the LGBTQ+ community through our partnership with GLAAD, not only in June, but all year long."