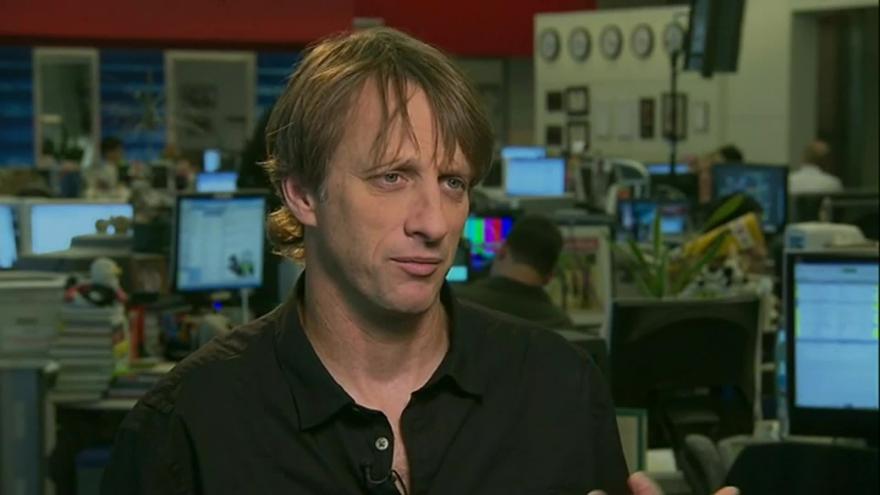 (CNN) -- Athletes may be used to putting their blood, sweat and tears into sports, but legendary skater Tony Hawk has just taken it one step further.

Hawk donated his blood as part of a collaboration with water company Liquid Death to produce 100 skateboards -- and they've already sold out.

"Yes, there is actually @tonyhawk's real blood in these skateboards. And yes, we sterilized it first. Own your very own piece of the Birdman today," reads a social media post from Liquid Death Tuesday.

"Although it could arguably make the world a better place, never ever use these boards to make clones of Tony Hawk."

The accompanying video shows Hawk, who is a brand ambassador for Liquid Death, having a vial of blood removed which is then mixed with a tin of red paint used to make the boards.

"Always read the fine print! Thanks @liquiddeath for this rare opportunity but please be careful with my life force," he wrote.

"Looking forward to our future 'collaborations' as long as they don't involve replicants."

The screen-printed boards are made in southern California and buyers will receive a certificate of authenticity, according to the Liquid Death website.

The company said it will donate 10% of profits from the boards to charities 5Gyres, which works to reduce plastic pollution in the oceans, and The Skatepark Project, which builds skateparks in underserved communities.

This is not the first celebrity-endorsed product to make use of human blood.

In March rapper and singer Lil Nas X launched a controversial pair of "Satan Shoes" featuring a bronze pentagram, an inverted cross and a drop of real human blood.

The black and red sneakers, part of a collaboration between Lil Nas X and New York-based art collective MSCHF, were made using Nike Air Max 97s.

However, Nike sued MSCHF and later settled a lawsuit.

As part of the agreement, MSCHF agreed to issue a voluntary recall for the Satan shoes, buying back the sneakers at the $1,018 sale price. Nike said it hoped the recall would remove the shoes from circulation. Other details of the settlement were not released.

"Now that tony hawk has released skateboards with his blood painted on them, and there was no public outrage, are y'all ready to admit y'all were never actually upset over the blood in the shoes? and maybe u were mad for some other reason?," he wrote.