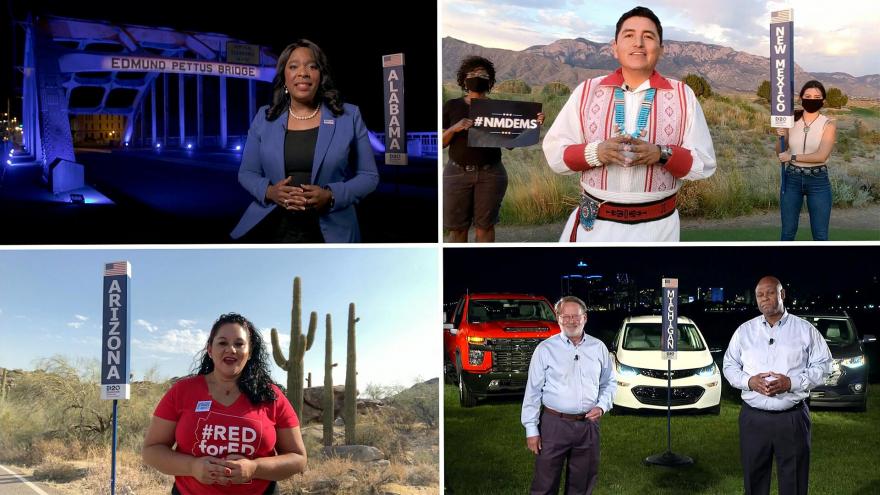 The second night of the Democratic National Convention opened with a 17-person "keynote" speech, interspersing clips of a diverse set of the party's rising stars into a coherent message, rather than spreading them throughout largely ignored daytime slots at an ordinary convention.

(CNN) -- It's difficult to imagine political parties returning to the packed, always-behind-schedule conventions of the past after Democrats' nomination of Joe Biden on Tuesday night.

The second night of the Democratic National Convention opened with a 17-person "keynote" speech, interspersing clips of a diverse set of the party's rising stars into a coherent message, rather than spreading them throughout largely ignored daytime slots at an ordinary convention.

Then, when it was time for the roll call vote on Biden's nomination, Democrats opted to show, rather than tell: Votes were cast in short videos from spots in all 57 states and territories that told stories -- firehouses, geographic landmarks, the Edmund Pettus Bridge in Alabama, and finally the Amtrak station named after Biden in Delaware -- from a diverse set of party officials and activists.

A series of biographical videos kept the focus on Biden's character on the night he'd been seeking since he first ran for president in 1988.

Here are six takeaways from the DNC's second night:

Biden's wife, long-time educator Jill Biden, closed the night with a speech from a Delaware high school classroom that connected the struggles students and parents face now with her husband's resolve in the face of personal tragedy.

Jill Biden didn't mention President Donald Trump at all. But her speech offered a clear contrast between the President and her husband, as she emphasized that he understood and cared about the pain many are facing amid the coronavirus pandemic.

"How do you make a broken family whole? The same way you make a nation whole," she said. "With love and understanding, and with small acts of compassion; with bravery; with unwavering faith."

The speech from Biden, a long-time teacher who continued to work in a classroom while her husband was vice president, was also the Democratic convention's most direct effort to address how the pandemic has shuttered many schools, leaving children to learn virtually and forcing parents to adapt.

"I hear it from so many of you, the frustration of parents juggling work while they support their children's learning, or afraid their kids will get sick from school," she said as she began her speech. And as she ended, she pledged that "these classrooms will ring out with laughter and possibility once again."

Yes, some Democratic stars -- Georgia's Stacey Abrams among them -- got shorter speaking slots than they would have merited in any other year. But the party's updated take on the pageantry of the convention was a joyful, effective update on what in most years is a stale process.

The roll call vote featured important figures who turned it into a moving moment, such as the parents of Matthew Shepard, the gay man who was beaten and left to die in 1998, in Wyoming. And it highlighted much of what Americans have missed during the pandemic, including states' scenic destinations and even food specialties, such as Rhode Island's calamari.

Perhaps the most memorable moment came from Jacquelyn Asbie, the New York Times security guard who shared a moment with Biden -- one that would later go viral -- when, in an elevator on his way to an editorial board interview, she told him, "I love you."

"In the short time I spent with Joe Biden, I could tell he really saw me, that he actually cared, that my life meant something to him. And I knew, even when he went into his important meeting, he'd take my story in there with him," she said. "That's because Joe Biden has room in his heart for more than just himself."

A generational divide on display

New York Rep. Alexandria Ocasio-Cortez and activist Ady Barkan spoke about a country in moral crisis, millions of its citizens going without health care in the midst of a pandemic.

The generational divide in Democratic politics was on full display Tuesday night. There was no spectacular clash, but the language used by the young progressives -- Ocasio-Cortez, who spoke for about 90 seconds, dedicated her time to addressing "a mass people's movement" -- laid bare tensions with the old guard, which focused on, as Clinton put it, the need to "hire" a new president.

That they shared the stage, though, underscored the prevailing will of the moment: that for all their differences, ideologically and stylistically, Democrats across generations are singularly committed to pushing Biden over the finish line -- and Trump out of the White House.

Conventions are creations of the candidates they nominate, and this one was built in Biden's image.

That means there's a lot of room, and time, for Republicans who the former vice president believes can help him win over the political center and GOP voters who are tired of Trump's consuming persona, disappointed by his performance in office or angry over his divisive rhetoric and policies.

Tuesday night's most notable Republican presence was Cindy McCain, the widow of 2008 Republican nominee John McCain, who arguably did more for Joe Biden's push for Republican support than the cross-party speakers who appeared in the first two nights of the convention.

Any reference to McCain is a not-so-subtle rejection of Trump, a man who has ferociously attacked the long-time Arizona senator for years, including after his death. Cindy McCain did not endorse Biden explicitly, but her participation in a video that heralded the friendship between the former vice president and Arizona senator spoke volumes. And top Democrats hope it gave Republicans turned off by Trump a nudge to get behind Biden, especially in Arizona, a battleground state where McCain's brand remains strong.

"They would just sit and joke. It was like a comedy show, sometimes, to watch the two of them," said Cindy McCain, adding later that the Biden-McCain friendship represented a "style of legislating and leadership that you don't find much anymore."

McCain was not alone. Former secretary of state Colin Powell, who served in Republican President George W. Bush's administration, endorsed Biden, arguing that the country needs to "restore" the values he believes America stands for and that Trump doesn't represent. Powell, however, has not backed a Republican for president since 2004.

By the standards of this abbreviated virtual convention, Bill Clinton got a healthy five-minute speaking slot. But by the standards of the former president's previous convention stemwinders, including his 2012 remarks that earned him the label "explainer-in-chief" from Barack Obama, his Tuesday night speech was basically a tweet.

Clinton's appearance was an uncomfortable moment. The party has changed dramatically since the former president was last nominated in 1996, and the #MeToo movement has undercut his political power.

But Clinton, by distilling the argument between Trump and Biden as chaos vs. compassion, showed on Tuesday night why he has addressed 11 straight Democratic conventions.

He delivered a pointed denunciation of Trump and his years in office, casting him as a chaotic "storm" in the White House.

And Clinton, in a way he has done for previous Democratic nominees, tried to encapsulate the decision voters had to make: "It's Trump's 'Us vs. Them' America against Joe Biden's America, where we all live and work together. It's a clear choice. And the future of our country is riding on it."

Most Americans had never heard of Ady Barkan before he confronted former Arizona Sen. Jeff Flake on a plane, en route home from Washington, beseeching him to vote against the 2017 Republican tax cuts.

Video of his words to Flake, asking him to "be a hero," went viral. And Barkan, who was diagnosed with ALS shortly after the 2016 election, went from an influential but low profile progressive activist to one of the party's moral leaders.

On Tuesday, Barkan, who endorsed Sens. Elizabeth Warren and Bernie Sanders before embracing Biden, spoke -- with the aid of a computer that tracks his eye movements -- about a "dehumanizing" health care system that has humiliated him and millions of other Americans, including those who are suffering through the pandemic without insurance.

"Each of us must be a hero," Barkan said, "for our communities, for our country, and then, with a compassionate and intelligent president, we must act together and put on his desk a bill that guarantees us all the health care we deserve."