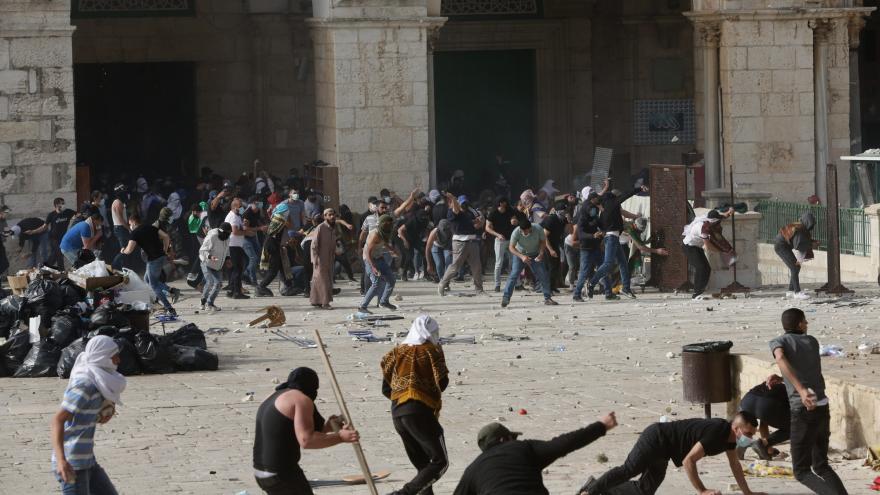 (CNN) -- Tensions in Jerusalem reached their highest point in years Monday with rocket sirens sounding just after 6:00 p.m. (11 a.m. ET), capping another day of violence in the holy city, where hundreds of Palestinians have been injured in clashes with Israeli police.

In response to what the Israel Defense Forces (IDF) said were dozens of rocket launches aimed at southern and central Israel, the IDF carried out a series of airstrikes in Gaza on Monday evening.

The Palestinian Ministry of Health said an Israeli airstrike killed nine people in Gaza, including three children in Beit Hanoun in the north of the Gaza Strip. The Israeli army has said it is investigating the incident.

Israel's military said 85 rockets had been launched from Gaza by 9:00 p.m (2:00 p.m. ET). One Israeli was lightly injured when an anti-tank missile was fired from Gaza towards a car in the nearby Israeli town of Sderot, the Israeli military said.

The aerial escalation between Israeli security forces and Palestinian militants followed clashes earlier on Monday morning when hundreds of Palestinians were injured after Israeli police entered the Al Aqsa mosque, one of the holiest sites in Jerusalem.

Also heightening tensions on Monday, a car drove into two pedestrians near the Lion's Gate entrance to the Old City after it was pelted with stones, according to video of the incident. The car, carrying religious Israelis, came under attack by young Palestinians as it tried to change direction, before accelerating forward and mounting the curb, sending two Palestinians hurling backward.

Police said the driver had lost control of the vehicle and that its occupants were slightly injured. The condition of the two Palestinians is not yet known.

Israeli Prime Minister Benjamin Netanyahu has backed police for their handling of rising tensions in Jerusalem over recent weeks, which he described Monday as a "struggle for the heart" of the city. He said Israel was committed to "ensuring the rights of everyone" to pursue their faith.

One of the main sources of growing unrest in recent days has been the possible eviction of several Palestinian families from their homes in the Jerusalem neighborhood of Sheikh Jarrah. On Sunday, Israel's supreme court postponed an appeal hearing on the decades-long legal case.

Israeli police have clashed with Palestinians in the neighborhood, as well as other locations, for several weeks now, with Palestinians accusing Jewish nationalists of provocation and police of heavy-handed tactics.

A pro-settler organization called Nahalat Shimon is using a 1970 law to argue that the owners of the land before 1948 were Jewish families, and so the current Palestinian landowners should be evicted and their properties given to Israeli Jews.

Palestinians say restitution laws in Israel are unfair because they have no legal means to reclaim property they lost to Jewish families in the late 1940s in what became the state of Israel.

The situation in Sheikh Jarrah has drawn worldwide attention, with the United States again expressing concern on Monday.

White House press secretary Jen Psaki said the US had "serious concerns" about the violence in Israel before adding that President Biden is continuing to monitor the situation.

"This is something that our national security team is closely monitoring, obviously, across government, certainly the President is kept abreast and is watching closely as well, Psaki told reporters at a White House briefing.

US National security adviser Jake Sullivan had a call with his counterpart in Israel, Meir Ben-Shabbat, on Sunday regarding the situation in Jerusalem.

On the phone call, Sullivan highlighted recent engagements by senior US officials with senior Israeli and Palestinian officials and key regional stakeholders to press for steps to deescalate tensions, according to a readout provided by the White House.

Sullivan reiterated the United States has serious concerns about the potential evictions of Palestinian families from their homes in the Sheikh Jarrah neighborhood, the readout says.

"They agreed that the launching of rocket attacks and incendiary balloons from Gaza towards Israel is unacceptable and must be condemned," according to the readout.

"Sullivan expressed the administration's commitment to Israel's security and to supporting peace and stability throughout the Middle East, and assured Mr. Ben-Shabbat that the U.S. will remain fully engaged in the days ahead to promote calm in Jerusalem," the readout said.