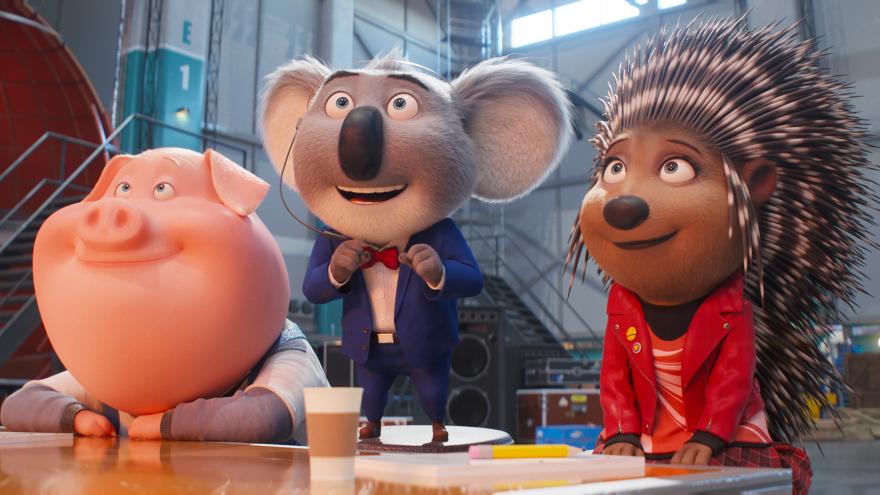 (CNN) -- Like the first movie five years ago, "Sing 2" mostly works on split levels, offering a jukebox assortment of popular songs that parents will recognize, and having cute animated animals belt them out to divert children. The result is a breezy exercise in karaoke for kids, where the soundtrack beats the movie and a lot of stars again lend their voices to the chorus.

The core players remain largely the same, with koala bear impresario Buster Moon (Matthew McConaughey, whose recent good career decisions include not singing or running for governor of Texas) betting on his ability to launch an elaborate stage show in Redshore City, which looks a whole lot like Las Vegas.

Unfortunately, the ruthless casino mogul (Bobby Cannavale) who runs the place insists that Buster land the participation of an aging rock-star lion (Bono), who has essentially become a hermit, as a condition of bankrolling the production, just one of the many hurdles that Buster and his pals encounter.

Still, the real star of "Sing" is the music, and the producers have seemingly spared no expense on that score, with a roster of tunes that include U2's "Where the Streets Have No Name" (Bono's there for a reason) as well as "Let's Go Crazy," "Goodbye Yellow Brick Road," "Higher Love," "I Say a Little Prayer" and more.

The animation is colorful, with the protracted show -- mounted under considerable duress -- accounting for a sizable chunk of the movie.

It's empty calories, and a highly calculated musical sugar rush. Still, this franchise from Illumination (the outfit behind "Despicable Me" and "Minions") doesn't really aspire to be anything more than fun, and on the most basic level, delivers just enough of it, especially for the pre-puberty demo.

Besides, for parents who wince at their tykes' musical tastes, it's probably a public service introducing kids to some of the songs with which their moms and dads grew up, all wrapped in a bright, anthropomorphic package.