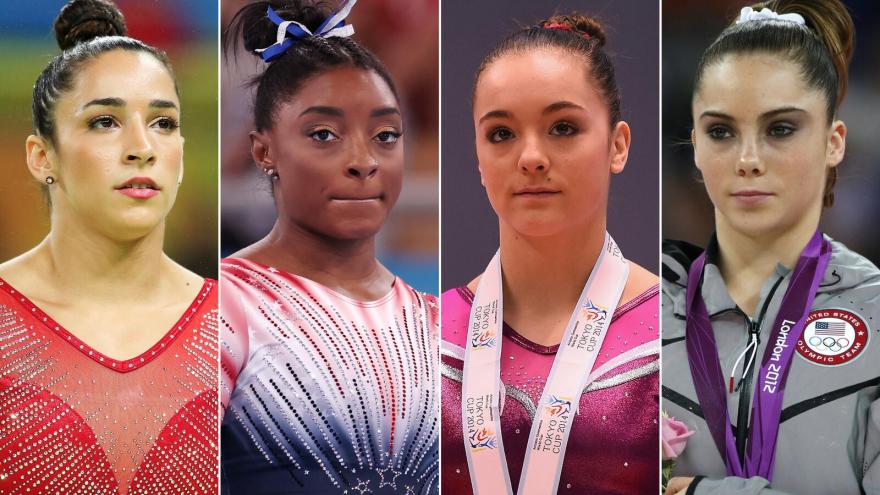 (CNN) -- Four US gymnastics stars will testify before the Senate Judiciary Committee on Wednesday during a hearing about the FBI's handling of the sex abuse investigation of former USA Gymnastics doctor Larry Nassar.

Testimony from the elite gymnasts -- Simone Biles, McKayla Maroney, Maggie Nichols and Aly Raisman -- follows a scathing report this summer from the Justice Department's inspector general that found FBI officials investigating allegations of sexual abuse by Nassar had violated the agency's policies by making false statements and failing to properly document complaints by the accusers, resulting in a delay in the probe into the claims.

All four gymnasts have said publicly that they were abused by Nassar.

Justice Department Inspector General Michael Horowitz and FBI Director Chris Wray will also testify at the hearing, which is titled: "Dereliction of Duty: Examining the Inspector General's Report on the FBI's Handling of the Larry Nassar Investigation."

The Office of the Inspector General found that senior officials in the FBI Indianapolis Field Office had failed to respond to the Nassar allegations with the utmost seriousness and urgency that they deserved and required, made numerous and fundamental errors when they did respond, and violated multiple FBI policies when undertaking their investigative activity.

The probe was opened in 2018 to see whether the FBI and its field offices had dragged their feet to respond to allegations of sexual assault made by gymnasts and the USA Gymnastics organization in 2015 and 2016.

The bureau said in a statement following the release of the report that the "actions and inactions of certain FBI employees described in the report are inexcusable and a discredit to this organization," adding that it has taken action to "ensure and has confirmed that those responsible for the misconduct and breach of trust no longer work FBI matters."

In 2018, Nassar, who's also a former Michigan State University doctor, was sentenced to 40 to 175 years in prison after more than 150 women and girls said in court that he had sexually abused them over the past two decades.

He had pleaded guilty to seven counts of criminal sexual conduct in Ingham County, Michigan, and admitted to using his trusted medical position to assault and molest girls under the guise of medical treatment.

"I've just signed your death warrant," Judge Rosemarie Aquilina said at the time. "I find that you don't get it, that you're a danger. That you remain a danger."