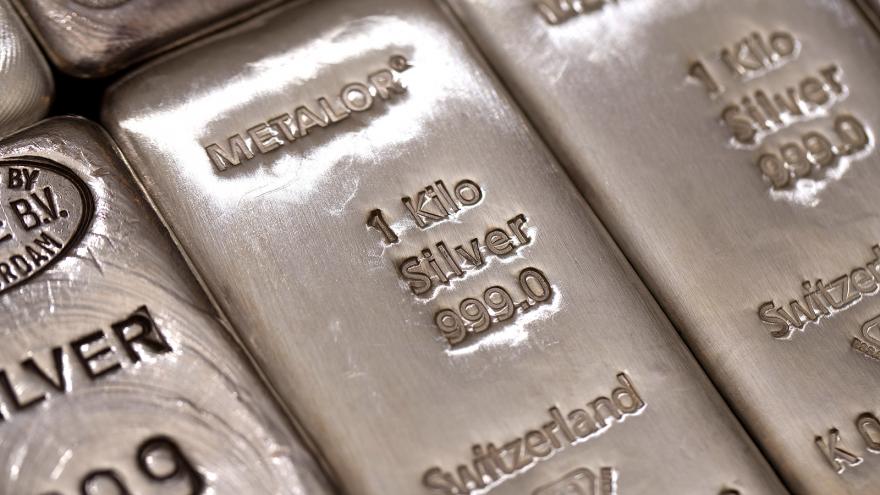 (CNN) -- Move over GameStop, Reddit mania is spreading to the precious metals market.

Silver futures surged as much as 13% to Monday, touching eight-year highs. That follows a 6% rally last week when some posts on the WallStreetBets group on Reddit called for betting on silver as a way to hurt big banks they believe are artificially suppressing prices.

Meanwhile, retail sites warned customers over the weekend they could not meet skyrocketing demand for silver bars and coins. And "#silversqueeze" is trending on Twitter.

However, it's not clear who the Reddit users are -- nor whether their market moves match the claims online.

In fact, some posts on WallStreetBets late Sunday and Monday suggested their movement is being co-opted by hedge funds and there is no coordinated effort in the silver market.

"The Silver Squeeze is a hedge-fund coordinated attack so they can keep fighting the $GME fight," one thread was titled.

The post said that buying silver "would be a tragic, irreversible decision that not only will most likely not make you any money because the squeeze is fake, it will put you on the sidelines from this righteous and glorious war we are in."

Senator Elizabeth Warren raised this concern Sunday as she called for the SEC to investigate.

"We actually don't know who all the players are in all this -- whether there's big money on both sides," Warren told CNN.

In more recent trading, silver futures were up about 9%. Shares of precious metals miner Coeur Mining rallied more than 20%, while Pan Am Silver rose 11%.

The moves provide another example of the power of a group that has captivated Wall Street and Main Street: WallStreetBets. The Reddit forum sent GameStop, AMC and other heavily shorted stocks skyrocketing last week, roiling markets and crushing some hedge funds that had bet against those stocks. Robinhood, the free-trading app, came under fire after restricting trades in GameStop and other stocks.

Last week the group appeared to set its sights on silver.

"SLV will destroy the biggest banks, not just some little hedge funds," one WallStreetBets user wrote. Another claimed JPMorgan Chase has been "suppressing metals for a long time. This should be epic. LOAD UP."

Several noted that JPMorga paid a record $920 million fine last year to settle charges that it engaged in manipulative trades of futures tied to precious metals as well as Treasuries.

The Winklevoss twins, who famously sued Facebook's Mark Zuckerberg and were early backers of bitcoin, both tweeted support for the push by WallStreetBets into silver.

"The #silversqueeze is a rage against the machine," Tyler Winklevoss tweeted.

"If silver market is proven to be fraudulent, you better believe gold market will be next," Cameron Winklevoss tweeted.

Leading retail sites posted warnings over the weekend that they faced heavy demand.

"Due to unprecedented demand on physical silver products, we are unable to accept any additional orders on a large number of products, until global markets open Sunday evening," APMEX, which calls itself the world's largest online retailer of precious metals, wrote in a notice atop its website.

SD Bullion warned that "due to unprecedented silver demand" it would also be unable to accept orders until Sunday evening. Similar notices were posted by Money Metals and other websites.

"It's not surprising to see the sharp and abrupt uptick in consumer demand overwhelm the physical supply of silver coins held by dealers in the short term," Ryan Fitzmaurice, a commodities strategist at Rabobank, told CNN Business in an email.

However, unlike GameStop and other unloved stocks targeted by WallStreetBets, silver futures have been strong of late. Hedge funds and other institutional investors had been bullish on silver futures and the precious metal was trading near multi-year highs.

"It is a dramatically different market setup," Fitzmaurice said. "I am not sure how well this new Reddit trading strategy will fare in futures markets and especially the notoriously volatile commodity markets."