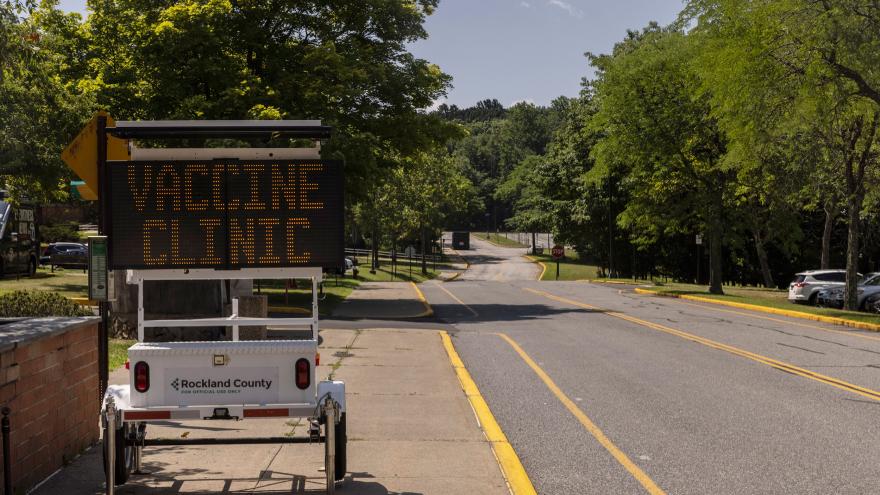 (CNN) -- A polio case identified in New York last month is "just the very, very tip of the iceberg" and an indication there "must be several hundred cases in the community circulating," a senior official with the US Centers for Disease Control and Prevention told CNN on Wednesday.

The case was found In Rockland County, which has a stunningly low polio vaccination rate. Dr. José Romero, director of the CDC's National Center for Immunization and Respiratory Diseases, noted that the majority of people with polio don't have symptoms and so can spread the virus without knowing it.

"There are a number of individuals in the community that have been infected with poliovirus. They are shedding the virus," he said. "The spread is always a possibility because the spread is going to be silent."

A team of CDC disease detectives traveled last week from agency headquarters in Atlanta to Rockland County, and they are "quite nervous" that polio "could mushroom out of control very quickly and we could have a crisis on our hands," said a community health leader who has met with the team.

"They are -- what is the opposite of cautiously optimistic?" said another community leader, an expert in vaccine education, who has also met with the CDC team in Rockland County. Both leaders requested anonymity because they are not authorized to speak publicly.

Polio can cause incurable paralysis and death, but most people in the US are protected, thanks to vaccination. Others, however, may be vulnerable to the virus for a variety of reasons.

Unvaccinated and undervaccinated people are vulnerable, and polio vaccination rates in Rockland County and neighboring Orange County, just north of New York City, are about 60%, compared with 93% nationwide, by age 2. Immune-compromised people can be vulnerable even if they are fully vaccinated.

Romero said the CDC is considering a variety of options to protect people from polio, including offering children in the area an extra shot of the vaccine, as UK health authorities are doing now in London, or recommending extra doses to certain groups of adults.

"We're looking into all aspects of how to deal with this. At this point, we don't have a definitive answer," he said.

The Rockland County polio case is the first identified in the United States in nearly a decade.

The virus has also been detected in sewage in Rockland County and neighboring Orange County. The positive samples were genetically linked to the individual case, but no other cases in the US have been reported.

About 3 in 4 people infected with polio don't have symptoms, but they're still capable of spreading the virus to others, according to the CDC. Among the rest, most have symptoms such as a sore throat or headache that could easily be overlooked or confused with other illnesses. Only a relatively small number, about 1 in 200 infected people, become paralyzed. A few of those who are paralyzed die because they can't breathe.

In the late 1940s, polio outbreaks disabled an average of more than 35,000 people a year in the US. A vaccination campaign started in 1955, and cases quickly plummeted. Today, a full round of childhood polio vaccinations -- four doses between 2 months old and 6 years old -- is at least 99% effective, according to the CDC.

But in recent decades, some small groups have not vaccinated their children against the virus. One of them is within the ultraorthodox Jewish community in New York, including in Rockland County.

Much of the rest of the religious Jewish community in Rockland County has rallied around efforts to educate the "outliers" who refuse to vaccinate, the community health leader said.

"This is a silent killer, like carbon monoxide, and we don't know when it will hit us," she said.

'A press release is not going to cut it'

The vaccine educator said the CDC team has been intent on learning the best ways to communicate with members of this community, who tend not to use the internet and instead get a lot of their information from the messaging platform WhatsApp as well as community newspapers.

This week, Rockland County and local health-care providers distributed an infographic in several languages, including Yiddish, that announced, "Polio is spreading in Rockland County."

The vaccine educator in Rockland County said that at the meetings with the CDC team, "we spoke about the need for messaging that resonates, and a press release is not going to cut it."

Dr. Mary Leahy, CEO of the largest health-care provider in Rockland County, Bon Secours Charity Health System, a member of WMCHealth, has attended meetings with the CDC and said that to get people who are not vaccinating their children against polio to understand the severity of the disease, "I turn to the grandparents and the great-grandparents who actually lived through the days of polio in the '40s and '50s."

That makes sense to Romero.

"I grew up in Mexico. I saw this disease, the complications," he said. "I went to school with children that had braces."

He said many Americans don't recognize the "devastating" effects of "lifelong paralysis" from polio.

"I think most of the American public has never seen a case of polio. People have lost that fear, if you will, of the disease."