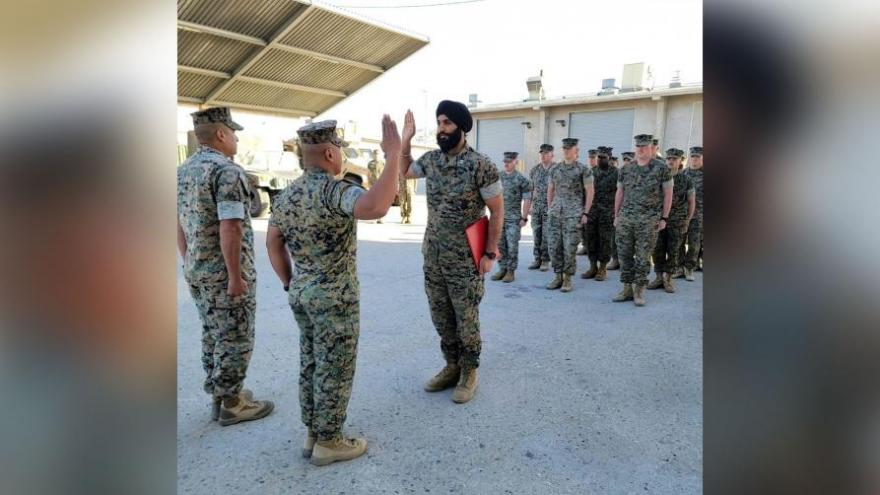 Capt. Sukhbir Toor during his pinning ceremony on March 14 at Twentynine Palms. Toor was promoted from 1st Lieutenant to Captain.

(CNN) -- Four Sikhs are suing the US Marine Corps over restrictions that effectively force them to choose between their career and their faith.

In a lawsuit filed on Monday in the US District Court for the District of Columbia, attorneys for Capt. Sukhbir Singh Toor and three prospective recruits allege that the Marine Corps refuses to allow the men to keep their beards during most deployments abroad and requires them to remove their turbans and beards during recruit training. Many Sikhs wear a turban and do not cut their hair or shave their beards as an outward commitment to their faith.

The Marine Corps has said its strict grooming standards are in place to ensure uniformity and safety. But lawyers for Toor, Milaap Singh Chahal, Aekash Singh and Jaskirat Singh argue that the standards are unevenly applied and violate the men's religious rights, saying that accommodations granted by other branches of the US military have shown that Sikhs can serve and maintain their articles of faith without issue.

"Assertions that recruits can prove their fidelity to country and comrades only by betraying sacred promises they have made to God are precisely what the First Amendment's Religion Clauses were designed to avert," the attorneys state in the lawsuit.

The Marine Corps directed questions about the lawsuit to the Department of Justice, which declined to comment for this story.

Toor, who is currently serving as a field artillery officer in Twentynine Palms, California, made the decision to cut his hair and shave his beard when he joined the Marine Corps in 2017 in order to comply with the force's policies, according to the lawsuit. Once he was selected for a promotion in 2021, he requested a religious accommodation that would allow him to keep his turban and beard.

The Marine Corps responded to Toor's request "'sometimes,' but with exceptions and caveats that render the accommodations meaningless," the lawsuit said. Initially, he was allowed to keep his hair, but prohibited from wearing a turban while serving in ceremonial duties or combat zones. He was allowed to keep a beard only when he wasn't deployed or "subject to deployment on short notice."

Toor appealed that decision, and the Marine Corps ultimately allowed him to wear his articles of faith during ceremonial duties. Still, as it stands, he cannot wear a turban and beard while deployed in areas where he could face hostile fire or imminent danger pay, according to the lawsuit -- a list of 39 countries that includes Israel, Uganda and Turkey.

"When you think about the restrictions that are still placed on his accommodation right now, he basically can't deploy," Giselle Klapper, senior staff attorney for The Sikh Coalition, told CNN. "He's a field artillery officer -- the nature of what he was trained to do is to deploy, so that's extremely career limiting. He's left on the bench right now."

Milaap Singh Chahal, Aekash Singh and Jaskirat Singh, the three prospective recruits, all requested religious accommodations last year, according to the lawsuit. They were granted a partial accommodation similar to Toor, and were also told that they would have to shave their beards and remove their turbans during boot camp.

"There's this perception that you can pack up your Sikh faith in a suitcase and then pull it out after basic training and quite frankly, that's just not the way it works," Amandeep Sidhu, a partner at the law firm of Winston & Strawn also representing the four men, told CNN. "That's not the way the Sikh faith works. It's not the way that the laws that apply to the Marine Corps work."

The four men declined to be interviewed for the story, but Milaap Singh Chahal, Aekash Singh and Jaskirat Singh said in a joint statement that they "remain ready to meet the high mental and physical standards of the Marine Corps because we want to serve our country alongside the best."

They continued, "We cannot, however, give up our right to our religious faith while doing so -- not least of all because that is one of the core American values that we will fight to protect at all costs as proud U.S. Marines."

The Marine Corps has previously justified its grooming and dress standards by citing an interest in maintaining uniformity in its ranks.

In explaining why it denied Jaskirat Singh's request for an accommodation during boot camp, the Marine Corps said "breaking down individuality and training recruits to think of their team first" was a key part of recruit training, according to the lawsuit.

But in recent years, the Sikh Coalition and its legal partners argue, the Marine Corps has relaxed some standards and embraced diversity in ways that contradict that reasoning. The force currently allows some natural hairstyles for women, and in a memo last year, the Marine Corps updated a policy to allow tattoos on any area of the body besides the head, neck and hands.

"The tattoo policy over the years has attempted to balance the individual desires of Marines with the need to maintain the disciplined appearance expected of our profession," US Marine Corps Commandant David H. Berger wrote in the October 2021 bulletin. "This Bulletin ensures that the Marine Corps maintains its ties to the society it represents and removes all barriers to entry for those members of society wishing to join its ranks."

Another concern that the Marine Corps has raised is the question of whether gas masks would fit properly with a beard. But earlier this year, the attorneys argued, the Marine Corps eased restrictions on Marines who aren't able to shave because of certain medical conditions, raising questions about why Sikhs weren't granted full accommodations.

Attorneys for Toor and the three recruits also pointed to how the US Army and US Air Force have recently streamlined their processes for religious accommodations and allowed Sikhs serve while maintaining their articles of faith, provided that they conform to certain grooming standards.

"These are guys who just graduated from high school a few years ago, who very specifically want to join the Marines," Sidhu said, referring to the three recruits. "They could have taken the comparatively easy route and decided to join the Army where dozens and dozens of Sikhs are serving and there's a track record, but they they wanted to be Marines."

After a similar lawsuit alleging a violation of religious rights was filed against the Navy, the Navy secretary directed the Navy and the Marine Corps last November to study how facial hair affects the function of gas masks, the military newspaper Stars and Stripes reported. That review is ongoing.