'Significant progress' made against fire on Navy ship in San Diego 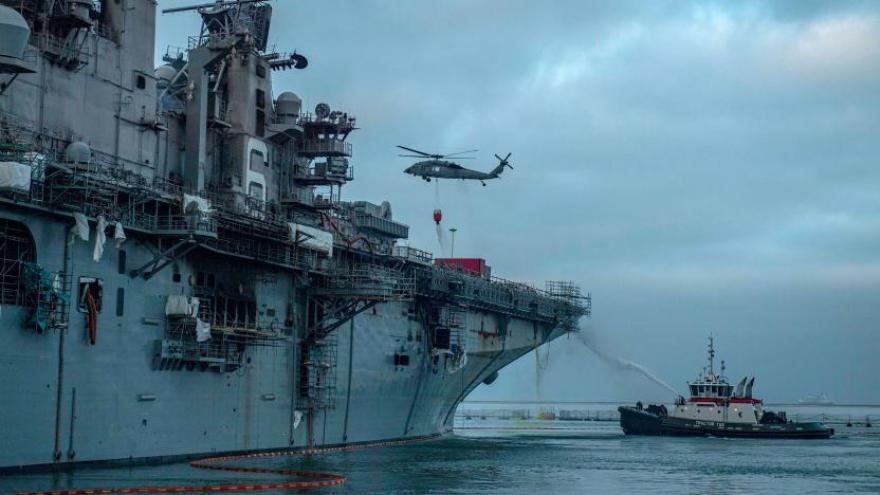 (CNN) -- The fire on the USS Bonhomme Richard in San Diego is still burning but firefighters have made "significant progress" toward putting it out, a Navy admiral said Tuesday.

The situation on the amphibious assault ship is stable and there is no threat of fire to the tanks that carry the approximately 1 million gallons of fuel on board, said Rear Adm. Philip Sobeck, commander of Expeditionary Strike Group Three.

"We still have an active fire which we are combating both from within and externally from multiple access points," he said at a press conference.

Sobeck said it was possible the fire could be extinguished in the next 24 hours.

The Coast Guard is preparing for an oil or other hazardous waste spill but there is currently no discernible sheen on the water to indicate a spill, said Coast Guard Capt. Timothy Barelli.

Firefighters are fighting two fires, one forward and one aft, the admiral said. The main fire was at the front of the ship, which firefighters initially fought externally because of the heat of the fire. On Monday, Sobeck said temperatures from the fire ranged as high as 1,000 degrees.

MH-60 Sea Hawk helicopters from Helicopter Sea Combat Squadron Three have conducted more than 1,200 water bucket drops, which helped cool the ship's flight deck and superstructure so fire crews could get on board and fight the fire, Sobeck said.

The ship's flight deck and superstructure were damaged by the fire, which caused the forward mast to collapse. Sobeck said on Monday there had been fire damage all the way through to the ship's skin.

Images posted on social media show heavy damage to the ship as well.

The ship was docked in San Diego for maintenance when the fire broke out on Sunday. Sailors were beginning to fight the fire when a subsequent explosion caused the vessel to be evacuated. The Navy has been battling the blaze ever since.

The report of a fire first came from the lower vehicle storage area, which is used to store armored vehicles and other Marine Corps equipment, Sobeck said.

Due to the amount of shipyard work being done, the large storage area was being used to store dry walls, supplies, and heavy duty cardboard boxes, which Sobeck helped fuel the fire.

The Bonhomme Richard is designed to support Marine Corps operations. The ship can transport Marines and equipment of a Marine expeditionary unit and land them in hostile territory via landing craft or helicopters, as well as provide air support by helicopters or attack aircraft.